Enset (Ensete ventricosum) is a member of the same botanical family as the banana, but unlike its cousin it’s not grown for its fruit. The main edible parts of the enset plant are the starchy rhizome and pseudostem. Even though the 'false banana' is native to the highlands of eastern and southern Africa, the domesticated types are virtually unknown outside Ethiopia, where it is a staple for nearly 15 million people in the southwestern part of the country. Earlier this year, a team of British and Ethiopian scientists published a draft genome sequence for enset by using the reference sequence for Musa acuminata as a template onto which they aligned their fragments of DNA, an approach similar to the one used to produce a draft genome sequence for Musa balbisiana. For more information on the crop, browse the Musalit records on Ensete ventricosum and downpload the PDF of The "Tree against hunger". 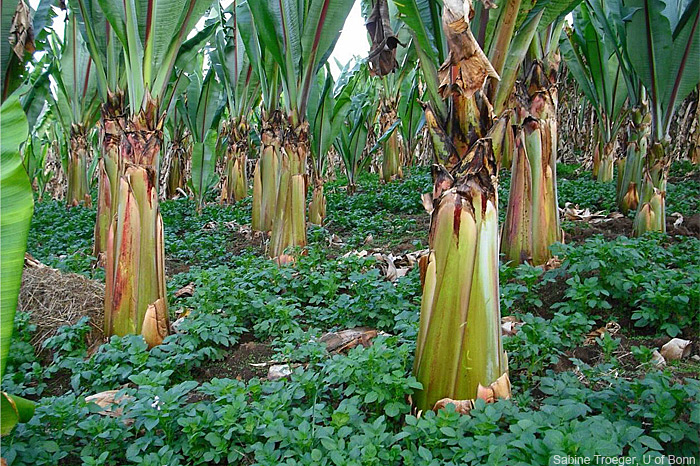 Cultivated enset plants tend to have erect or slightly drooping leaves that funnel rainwater down into the plant's pseudostem. Because the plant can be harvested throughout the year, it provides food when other crops fail. It has been dubbed the “tree against hunger”. (Photo by Sabine Troeger) 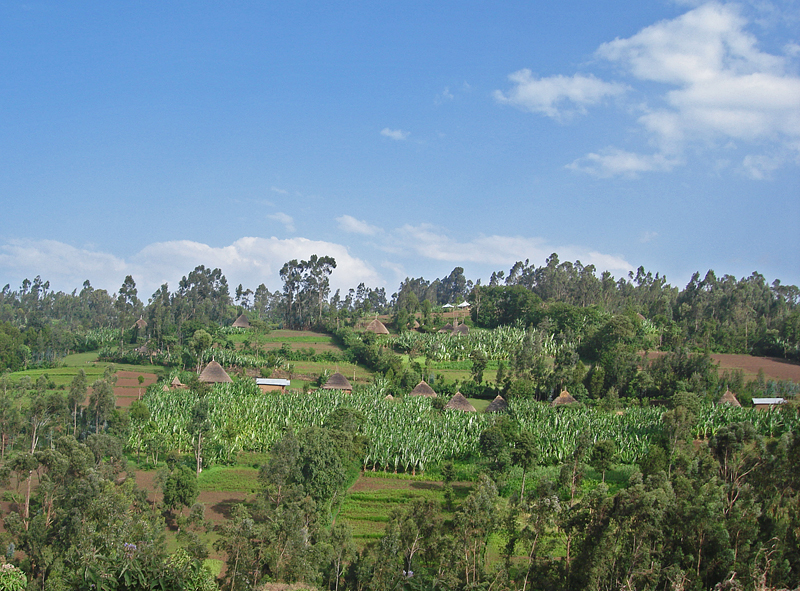 Enset plants are traditionally grown in small plantations adjacent to homesteads. It is estimated that 40 to 60 plants can provide enough food for a family of 5 to 6 people. These foods (such as 'amicho', boiled pieces of rhizome, and the flatbread 'kocho') are low in protein, vitamins and minerals but are calorie-dense. Most enset products are consumed or used at the farm and village level. (Photo by Guy Blomme) 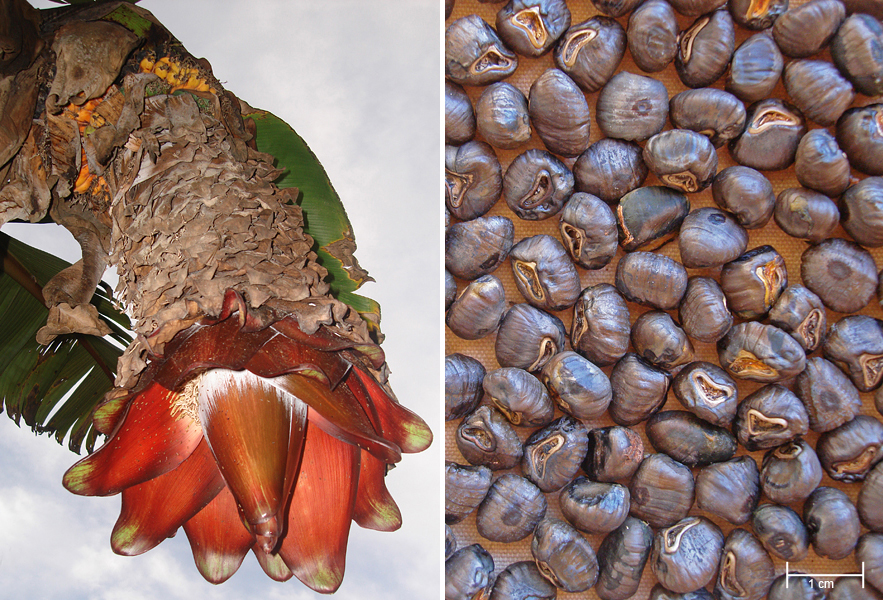 The short and thick banana-like fruits are not eaten as they are full of seeds. At any rate, cultivated enset plants rarely reach this stage as they are harvested shortly before flowering and propagated vegetatively. Harvest is a laborious process that involves prying the entire plant out of the ground. (Photos by Guy Blomme) 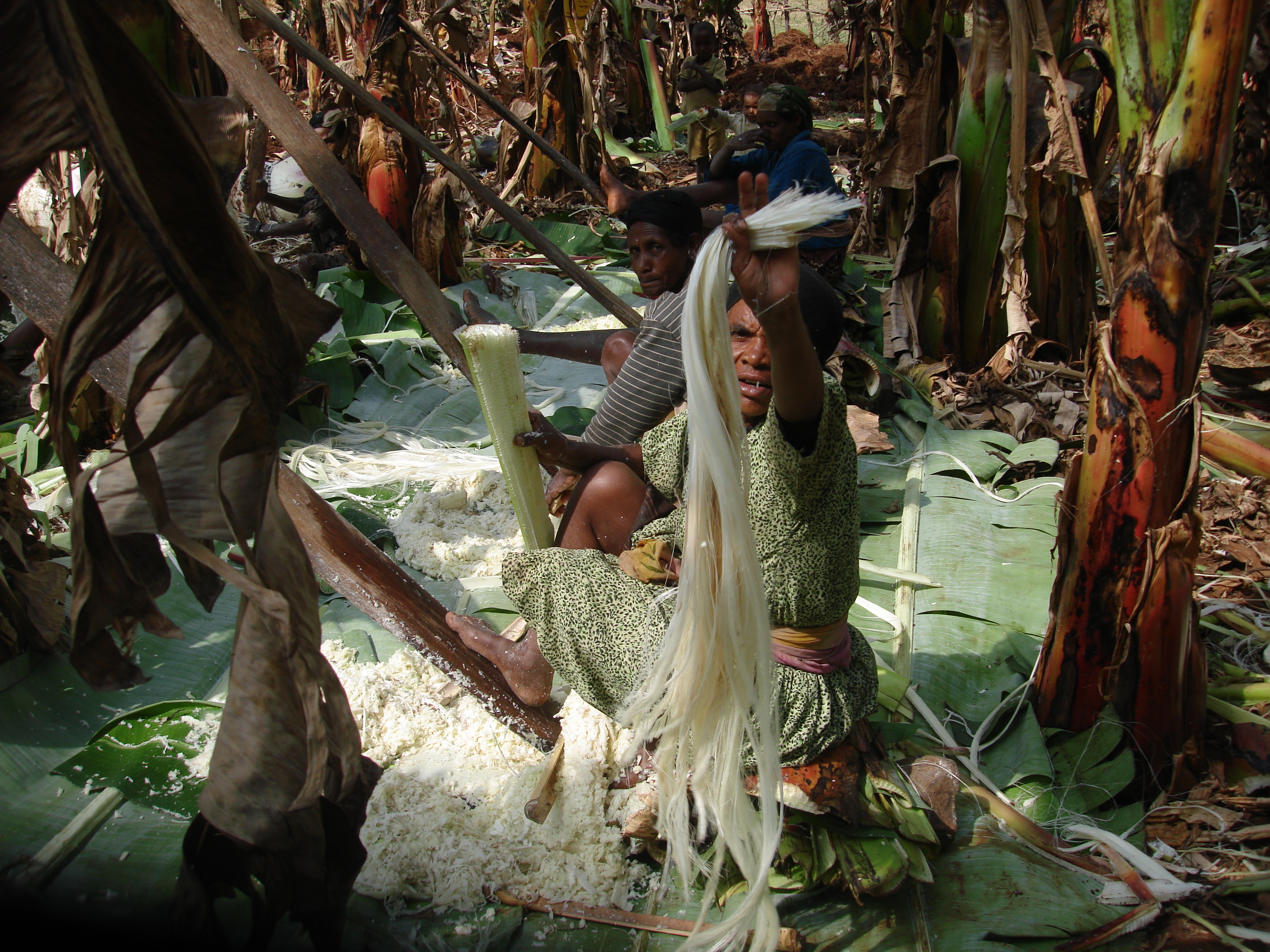 The men dig up the plants which the women slowly dismantle (3 women can only process 2 enset plants in a day). Their feet are as important as their hands to separate the fibre from the pulp in the leaf sheaths. The pulp is used in the making of fermented starch. (Photo by Guy Blomme) 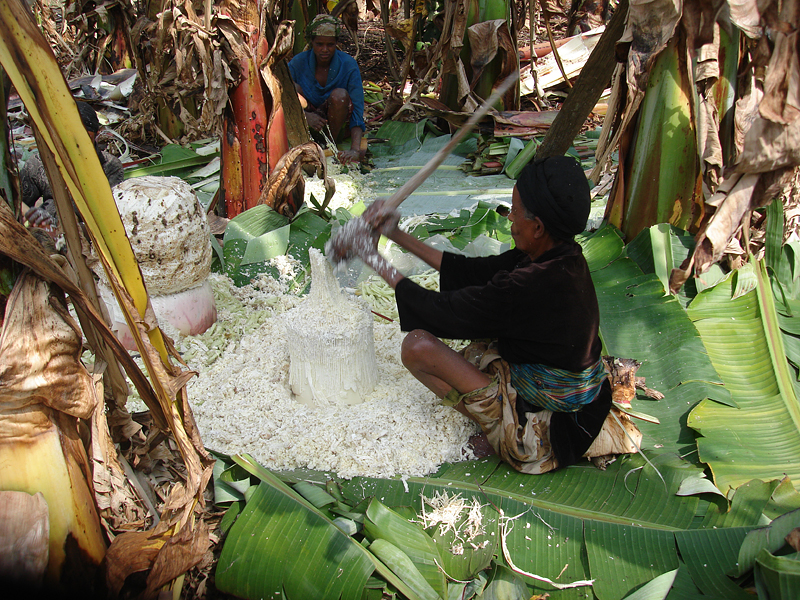 The rhizome is pounded and mixed with the pulp from the leaf sheaths and fermented starch from a previous batch. The mixture is put in a pit lined with enset leaves, sealed and covered with more leaves and stones. It's then left to ferment for up to a year. The fermented starch can keep for years and is used as needed to make 'kocho' or to sell at markets. (Photo by Guy Blomme) 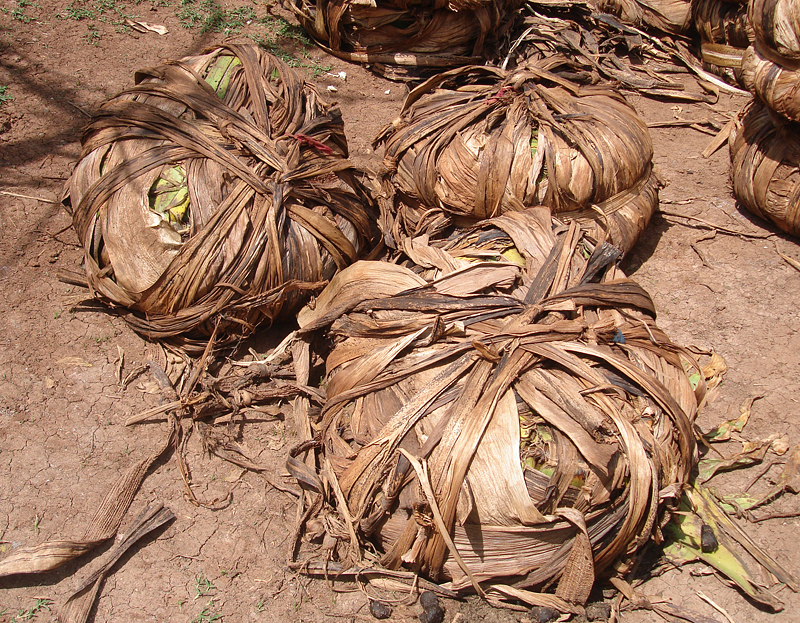 The fermented starch is wrapped in bundles for transport and sold in markets to be processed into 'kocho'. The paste is cut into pieces to make sure any remaining fibres are chopped up and squeezed into a ball up before being flattened. The flatbread is grilled in a pan or wrapped in leaves and baked in an oven pit. (Photo by Guy Blomme) 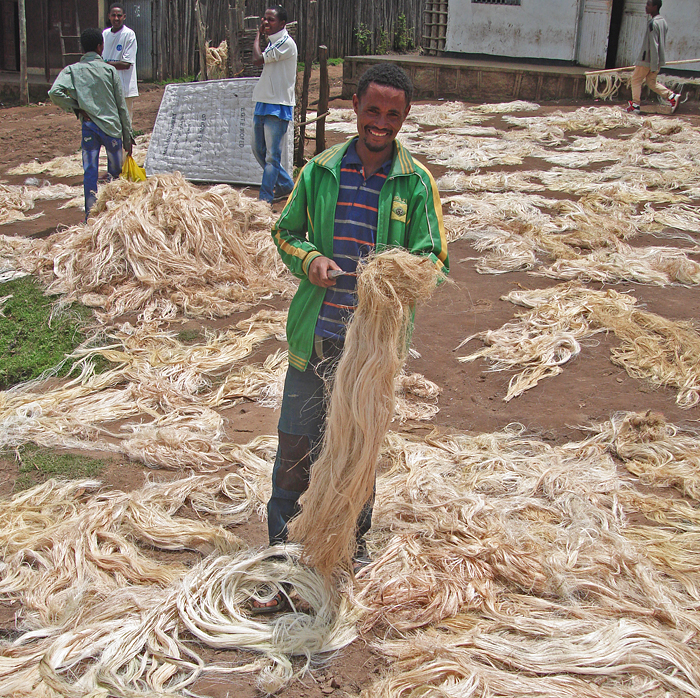 The fibre extracted from the pseudostem after its starch has been harvested is used for making ropes, mats and sacks. Most fibre is used at the farm level but some is also collected at village level and then sent to a coffee bag factory in the capital Addis Abeba. (Photo by Guy Blomme) 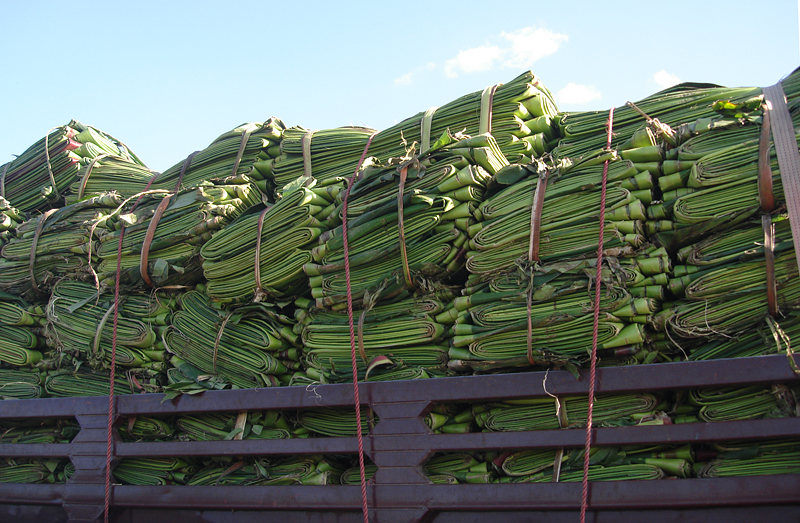 Enset leaves are also harvested and put to various uses, such as serving and wrapping food and lining fermentation pits. Along with other parts of the plant, they are also fed to animals (mainly in the dry season when there are few other sources of feed) and used as construction material. (Photo by Guy Blomme) 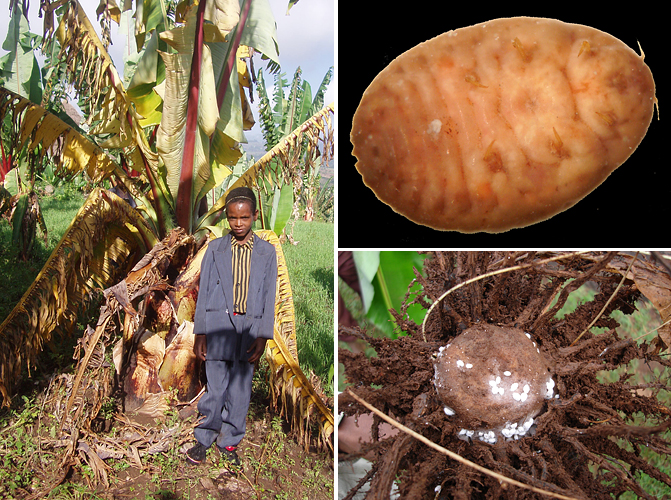 The enset plant’s main enemies are a bacterium and an insect. The Xanthomonas bacterium, which causes a wilt disease (left), was first reported in 1968 and has since spread to East Africa's bananas, on which the disease is known as BXW. The enset root mealybug (upper right) attacks the plant’s roots and rhizome. (Photos by Eldad Karamura, left, and Guy Blomme) 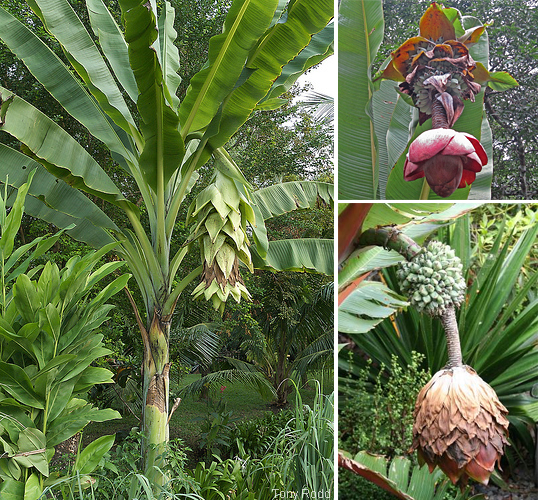 The Ensete genus includes a handful of species that are native to Africa and Asia. The taxonomy of the genus has not been fully resolved and remains a subject of debate.