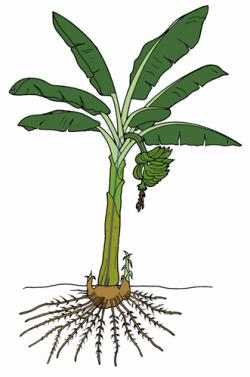 Drawing of a banana mat showing the 'true' stem (shown in blue) inside the pseudostem. The clump formed by the fruit-bearing stem, the suckers and the rhizome is called a mat. In commercial plantations the number of suckers is kept down by pruning.

The banana is a tree-like perennial herb. It is an herb because it does not have woody tissues and the fruit-bearing stem dies down after the growing season. It is a perennial because suckers, shoots arising from lateral buds on the rhizome, take over and develop into fruit-bearing stems.

What looks like a trunk is not a woody stem but a pseudostem, a compact assemblage of overlapping and spirally arranged leaf sheaths. The 'true' stem is made up of three parts: the underground rhizome, the aerial stem to which are attached the leaves, and the peduncle to which is attached the inflorescence.1 The stem starts on the rhizome's apical meristem, grows inside the pseudostem, and ends in the male bud.

Mat is the banana-specific horticultural term for the clump formed by the rhizome, the fruit-bearing stem (or stems as more than one stem can be fruiting at the same time) and the suckers. Some people say stool. The botanical term is genet2 . The above-ground shoots are called ramets. Barring mutations in the lateral buds, the shoots on a genet are genetically identical to each other (i.e. clones).

Wild species of bananas also form genets but, unlike cultivated bananas, they also reproduce sexually since their flowers are fertile. Pollination is required for the ovules to develop into seeds, which in turn stimulates pulp development in the fruit. Banana cultivars, which have flowers that are mostly sterile, produce fruits parthenocarpically, in the absence of pollination.

The root system is the means by which the plant takes up water and nutrients from the soil.

The rhizome is commonly referred to as a corm, and occasionally as a bulb, but the botanically correct term is rhizome4 . Rhizomes are characterized by horizontal underground growth; production of roots from multiple nodes; and production of clonal shoots5 . Corms, on the other hand, are vertical enlarged compact stems with a tunic of thin leaves and roots arising from a single node6 ; features that do not describe well the banana's underground structure.

In the vegetative phase, the terminal growing point of the rhizome, the apical meristem, has the form of a flattened dome. At the transition from the vegetative to the floral stage, the meristem area becomes convex and rises above the surrounding leaf bases. Flower bracts appear in place of leaves. Swellings, which differentiate into female flowers and then male flowers, appear at the base of the flower bracts.

Main page on the banana pseudostem

The stem is visible in the center of the pseudostem.

The pseudostem is the part that looks like a trunk. This 'false stem' is formed by the tightly packed overlapping leaf sheaths. The pseudostem continues to grow in height as the leaves emerge one after the other and reaches its maximum height when the stem, which has been developping inside the pseudostem, emerges at the top of the plant.

Even though the pseudostem is very fleshy and consists mostly of water, it is quite sturdy and can support a bunch that weighs 50 kg or more.

Banana plants stripped of their leaves to reveal the stem.

The 'true' stem provides support to the leaves and flowers, some of which will develop into fruits. The leaves and flowers are attached to a node, and the sections between nodes are internodes. The stem is subdivided in three parts: the underground rhizome (see above), the aerial stem, and the peduncle.1

The aerial stem begins to develop after the formation of flowers on the rhizome's apical meristem. As it develops, it carries the inflorescence and the leaf bases upwards inside the pseudostem.7

When the aerial stem emerges at the top of the plant, it is called the peduncle.

Main page on the banana leaf

The leaf is the main photosynthetic organ. Each leaf emerges from the center of the pseudostem as a rolled cylinder (see cigar leaf below). The distal end of the elongating leaf sheath contracts into a petiole, that is more or less open depending on the cultivar. The petiole becomes the midrib, which divides the blade into two lamina halves. The upper surface of the leaf is called adaxial while the lower one is called abaxial.

Lamina veins run parallel to each other in a long S shape from midrib to margin. Veins do not branch, which results in leaves tearing easily.

The cigar leaf is a recently emerged leaf still rolled as a cylinder.

The lapse of time in which a leaf unfolds varies. Under favourable climatic conditions, it takes about seven days, but it can take up to 15 to 20 days under poor conditions.

The new leaf is tightly coiled, whitish, and particularly fragile.

The extension at the tip of the leaf is called the precursory appendage. After emergence, it withers and falls off.

Main page on the banana sucker

A sucker is a lateral shoot that develops from the rhizome and usually emerges close to the parent plant. Other names for sucker are keiki (in Hawaii) and pup.

A sucker that has just emerged through the soil surface is called a peeper. A full grown sucker bearing foliage leaves is called a maiden sucker.

The number of suckers produced varies with the type of cultivar. The sucker selected to replace the parent plant after fruiting is called the follower or ratoon.

The female (pistillate) flowers appear first. In cultivated bananas, the ovary develops into a seedless fruit by parthenocarpy (without being pollinated). As it lifts, the bract (a modified leaf associated with a reproductive structure) exposes a cluster of female flowers that are normally arranged in two rows. These flowers will develop into a hand of fruit. The number of hands in the bunch depends on the number of female clusters in the inflorescence, and varies depending on the genotype and environmental conditions.

Male flowers
As the female flowers develop into fruit, the distal portion of the inflorescence elongates and produces clusters of male (staminate) flowers that produce pollen. In cultivated bananas, the amount of pollen is reduced or may be absent.

In botany, the peduncle is the stalk that supports the inflorescence. Yet, in the Descriptors for bananas, the peduncle refers only to the stalk between the leaf crown and the first hand of fruit, whereas the stalk that actually supports the female and male flowers is called rachis10 .  Jeff Daniells and David Turner have argued that in keeping with the botanical definition of the term, the peduncle extends to the meristem in the male bud and is composed of three sections: the transitional, female and male peduncles1 .

The transitional peduncle supports organs that are in transition from leaves to bracts: sterile nodes with a bract that abscises at bunch emergence. It corresponds that what is traditionally called the the peduncle.

The female peduncle supports the female flowers that develop into fruits.

The bunch is the descriptive term that includes all the fruits. The fruits are arranged into hands, the former clusters of flowers that were each subtended by a bract. By analogy, the fruits in a hand are often called fingers.

The male peduncle  supports the male flowers in the male bud. It corresponds that what is traditionally called the rachis, an ambiguous term that in botany has been used in relation to both vegetative and reproductive parts, whereas the term peduncle is only used for stems that support flowers1 .

The part above the male bud can be bare or covered with persistent bracts. The scars (nodes) indicate where the bracts were attached. The male peduncle continues to grow as the fruits are maturing.

The male bud contains clusters of male flowers. Each cluster is subtended by a bract. The male bud is sometimes called the bell. In some cultivars, it ceases to grow after the fruits have set and can be more or less exhausted by the time the bunch reaches maturity. The presence or absence of the male bud is one of the traits used to distinguish cultivars.

The portal on the different parts of the banana plant

Would the true peduncle please stand up? published 3 March 2016 in Under the peel, the blog of the ProMusa community