Loading...
Under the peel » Improving bananas by mixing strategies

A recent piece on the domestication of rice has scientists worrying that intensive breeding for high yield and resistance to pests and diseases has narrowed the crop’s genetic diversity, leaving it more susceptible to its natural enemies and less adaptable to the effects of climate change. With bananas, it’s the opposite. By coaxing bananas to take up sex again, breeders broaden the crop’s narrow genetic base. On the other hand, breeders have yet to produce a banana that readily substituted for an existing cultivar. The reason may be, as CIRAD breeder Frederic Bakry pointed out during his keynote presentation at the 2014 ProMusa symposium, that conventionally bred hybrids are ‘primeval’ bananas in need of ‘post-breeding improvement’. 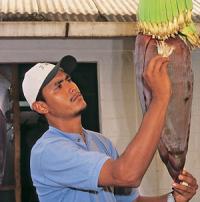 To appreciate why they do, it helps to bear in mind that edible bananas are not only the product of sexual reproduction. After the mating that sealed their fate as vegetatively propagated plants1 , domesticated bananas continued to change through mutations2 . This means that many cultivars have been shaped by hundreds, even thousands, of years of farmers selecting and propagating mutants that appealed to them. The problem that arises when conventional breeding is used to improve cultivars is that some of domestication’s handiwork may come undone as genes are reshuffled.

That’s where Bakry’s post-breeding improvement comes in. Some of it will come from farmers selecting and propagating mutants since improved hybrids, like cultivars, mutate in farmers’ fields. An example is ‘Little Gem’, a small-fruit selection of the ‘Goldfinger’ hybrid bred by the Honduran agricultural research foundation FHIA, which people visiting Tim Johnson’s farm during the 2014 ProMusa symposium got a chance to taste. What Bakry suggested, however, is nudging the process by inducing mutations or using genetic engineering to introduce specific genes.

In bananas, mutations are usually induced using radiation or tissue culture. The latter is how the Taiwan Banana Research Institute produced Giant Cavendish variants – called GCTCV for Giant Cavendish tissue culture variant – that are more resistant to tropical race 4 (TR4) than your average Cavendish cultivar. But since other traits also change, and not always for the better, the record on adoption has been mixed. So the selection process continues to come up with somaclonal variants that better meet the exacting standards of the export industry.

As for genetic engineering, it could be used to confer resistance to diseases, such as Fusarium wilt, bunchy top and Xanthomonas wilt. As a matter of fact, work on the latter has progressed to the field trial stage.

Considering the limitations of conventional breeding, somatic mutations (induced or spontaneous) and genetic engineering as stand-alone strategies, combining them to produce a more well-rounded banana makes sense. As a breeder, Bakry, was looking for tools to fine-tune bred hybrids, but the reverse is also possible, such as using genetically modified bananas in breeding schemes.

1 The latest take on the domestication of bananas ascribes sterility to selection for parthenocarpy (the development of pulp without pollination) and structural heterozygosity disrupting the formation of reproductive cells. Studies probing the genetic make-up of cultivars suggest that structural heterozygosity was the result of a series of hybridizations between genetically distant wild ancestors and between their derivatives.
2 Bakry estimates that the crop’s genetic base is underpinned by 20 to 25 sexual events. By contrast, the Plantain subgroup alone has more than 100 cultivars derived through somatic mutations from the same ancestral cultivar, or cultivars sharing the same parents or closely related ones.
Related stories
More stories…