Loading...
Under the peel » The challenges and opportunities of producing organic bananas for export in Sudan

Sudan may seem an unlikely place for growing bananas, but as I explained in my presentation at last month’s ProMusa symposium it has a large potential for organic banana production. For one, pests and diseases are largely absent, except for nematodes in places. Black leaf streak – the bane of export growers in the humid tropics — is not a problem thanks to the region’s dry climate. Other selling points are sea access (through Port Sudan) and proximity to the European and Middle East markets (see map). The main production areas of Kassala and Sinja, respectively located on the banks of the Mareb river and Blue Nile river, are also endowed with fertile soils and abundant water for irrigation.

There are not many countries possessing comparably favourable conditions, hence our interest at AgroFair in a project to promote the export of organic bananas that had started in 2008. Funded by the Common Fund for Commodities and coordinated by Bioversity International, the project initially focused on improving the quality of the bananas. The assumption was that providing a quality product would attract buyers, but instead it became clear that the involvement of importers was needed to help address the problems along the value chain. We joined the project in August 2012, together with the Technical Assistance for Sustainable Trade and Environment Foundation (TASTE), to help tackle bottlenecks and do a test shipment.

Sudanese banana farmers do not apply any of the practices that are part of the day-to-day management of export plantations in Latin America. For example, they do not remove any of the suckers growing at the base of the mother plant, cut the dead leaves or use bunch covers. As a result, most of the fruit do not meet the quality criteria for export to Europe. Moreover, the most widely grown cultivar is Dwarf Cavendish, whose fruits are generally too small for the export market. As part of the project, Sudan's Horticultural Sector Administration introduced the Giant Cavendish cultivar, but adoption has been rather slow. As long as most of the bananas are produced for the national market, farmers have little incentive to switch to Giant Cavendish, which is more prone to wind damage than Dwarf Cavendish. 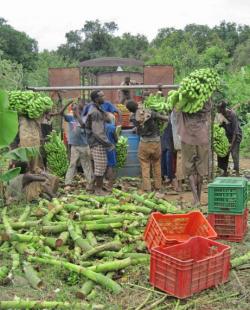 Another disincentive is that farmland is often owned by civil servants or businessmen for whom farming is a side-line activity rather than a profession. Moreover, the wages paid to the workers (many of them migrant workers from Ethiopia) are low, in the order of 1-2 USD a day. As a result, there is a high turnover of labour. Workers rarely stay for more than 3 weeks, after which they tend to move on to better paid jobs. This situation seriously compromises the effectiveness of any training.

As part of the project, we organized a study tour to Sullana in Northern Peru, to meet with producers of export organic bananas who operate under similar conditions to those in Sudan (i.e. dry climate and small farms). The visit allowed the Sudanese farmers to see how relatively simple, shared packing stations can be effective, provided the handling is done with care. The group was also introduced to the organization model of Grupo Hualtaco SAC, a private company (partly owned by AgroFair) that provides support services to its export banana growers.

Gerardo Gutiérrez, an agricultural engineer with extensive experience in the Latin American banana sector, was also brought in to assess the situation, train farmers and help with the export trial. He also produced a Technical Guide for the Production of Export Bananas in Sudan.

The export trial, which was meant to take place in February 2013, was stopped after 150 boxes, out of the 1,080 planned. In January, a dust storm had left a thin layer of dust on the fruits that damaged the peel when the bunches were brought to the packing station. Had the trial gone ahead, the entire consignment would have been lost upon arrival in Europe. In Sudan, bunch covers are not needed to protect against insects, but would be useful to protect against dust storms.

One of the problems of developing an organic banana export industry in Sudan is that while exporting to Europe pays better than selling to the local and regional markets, it is a very demanding market that requires more investment on the part of the farmers. Moreover, farmers selling their bananas locally don’t need to harvest them, as this is done by the middlemen.

Creating an export banana culture in Sudan will take time (it took 10 to 15 years in Peru). It will also require the active involvement of industry partners, especially importers, to align the various interests at play and achieve a working value chain.