Loading...
Under the peel » TC, or not TC. Is that the question?

The TC in the title stands for tissue culture, a technique whereby multiple copies of a plant are produced on a sterile culture medium. Even though TC plants have been used by commercial banana growers since the mid-1980s, a diversity of experiences has kept alive a debate on whether TC plants are intrinsically superior to conventional planting material, generally pared suckers, as a recent discussion on the ProMusa general mailing list showed. It started when a member wrote that TC plants are off to a poor start and grow slowly, probably because they lack beneficial endophytes. To which another member responded that numerous field experiments show that, on the contrary, TC plants outperform suckers because they hit the ground running, so to speak, and are more physiologically efficient. Other commentators questioned whether there was even a common basis for comparison. The two types of planting material are indeed very different. While TC plantlets have functional leaves and a relatively well-developed root system at the time of planting, pared suckers have had their leaves, roots and various amounts of their pseudostem removed before planting. Lacking roots for nutrient uptake and leaves for photosynthesis, the pared suckers depend on their reserves to establish the new plant. This alone should give TC plants a ‘head start’ that may explain some of the differences between them and conventional material.

A number of observations are consistent with the ‘head start’ hypothesis. I found 13 published studies1  that compared TC plants with conventional planting material (C plants) in the plant crop, for a total of 42 comparisons. In many of the comparisons, the TC plants produced, as expected, a larger bunch than the C plants. But they also flowered earlier. Since bunch weight is influenced by the climatic conditions before flowering (which affect fruit and hand number) and after flowering (which affect fruit filling), part of the difference in bunch weight between TC plants and C plants could be due to their different flowering times. The effect of climate on bunch weight is pronounced in the subtropics (figure 6 in Robinson and Human 1988 or figure 5.5 in the 2nd edition of Bananas and Plantains), but also occurs in the tropics (Khayat et al. 2004).

To evaluate whether climatic conditions influenced the results, I calculated the difference in flowering time between TC and C plants (x-axis in figure 1) and plotted it against the proportional difference in bunch weight (y-axis). A positive value on the y-axis means that TC plants produced heavier bunches than C plants. A value of zero on the y-axis means there was no difference in the bunch weight of the TC and C plants. A negative value on the x-axis means that TC plants flowered earlier than C plants. The TC plants that produced a heavier bunch and flowered earlier than the C plants are in the upper left quadrant. 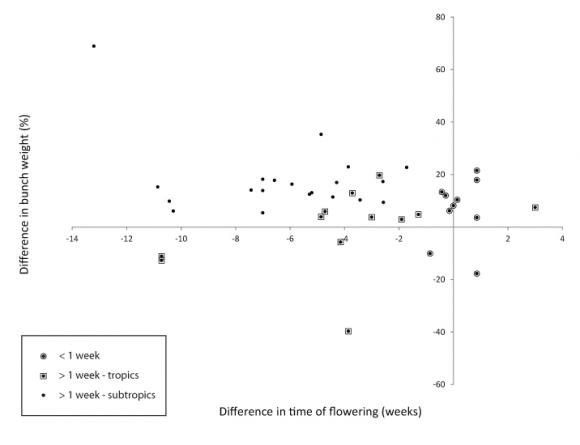 Figure 1. Differences between tissue culture plants (TC) and conventional planting material (C) with regards to their bunch weight and time to flowering in the plant crop. The data are from 42 comparisons within 13 published studies across the tropics and subtropics, and 4 genome groups (AAA, AAB, ABB and AAAB).

To explore these data, I divided them into two groups. The < 1 week group includes the TC plants that flowered within a week of the corresponding C plants (circled points in figure 1). The > 1 week group includes the comparisons where flowering of the TC and C plants was separated by more than one week (full circles and points surrounded by a square). Since the plants in the < 1 week group would have been exposed to similar climatic conditions around flowering, any difference in their bunch weight can be attributed to differences between the TC and C plants and not to differences in seasonal conditions.

In three instances, the difference in bunch weight in the < 1 week group is fairly large, around ± 20%. The two highest points in the upper right quadrant—TC plants that flowered (or were harvested) after the C plants but ended up with a heavier bunch—come from an experiment by Robinson and Fraser (1992) in Burgershall, South Africa. The authors retrospectively thought the management of the experiment favoured the TC plants. The authors had planted TC and C plants each month for 12 months. Having decided to water the TC plants regularly to keep them alive, they had to apply the same irrigation regime to the C plants. In discussing their results, they noted that some of the C material did not produce a plant and may have rotted due to the additional irrigation. On the other hand, the 0.9 week -17.9% data point in the lower right quadrant—TC plants that flowered after the C plants and produced a smaller bunch—comes from an experiment in which the ‘head start’ was tipped in favour of the C plants (120 cm-high suckers compared with 15 cm-high TC plants).

To examine seasonal influences further, I divided the points in the > 1 week group into those from experiments in the tropics (points surrounded by squares) and those from the subtropics (full circles). TC plants flowered before the C plants by 2.9±0.9 weeks in the tropics, compared with 4.9±0.8 weeks in the subtropics. The spread of flowering times in the subtropics ranged from 0.9 to -10.9 weeks. This range is associated, in part, with different planting dates within and between experiments. When planted in spring/summer the TC plants flowered on average 4.6±0.7 weeks before the C plants. When planted in the cooler seasons (autumn to winter), the TC plants flowered much earlier, 8.4±0.9 weeks, than the C plants. This is likely because C plants are slow to establish under cool conditions, according to various authors. These data suggest that the amount of ‘head start’ attributed to TC plants varies with the season of planting.

The largest difference in bunch weight in the upper left hand quadrant is from an experiment by Buah et al. in Okinawa. Removing this point from the > 1 week data does not change the conclusion about the increased bunch weight of TC plants since the difference in bunch weight remains significant (9.0%±2.4, P<0.001, n=31). The Okinawa study is interesting because it compares TC plants that are 50 cm high with C plants that are also 50 cm high. Moreover, both had been standardised to four leaves at planting. The only difference noted by the authors is that the roots of the C plants were damaged (the C plants had been dug up on the same day as they were planted). Based on my experience of digging suckers for planting, it is indeed very difficult to remove a sucker from a parent plant without considerable damage to the root system. Like the pared suckers, the C plants probably had to establish a new root system before they could continue growing, as welll as coping with water loss from their four live leaves. According to figure 1 in the paper by Buah et al., the C plants grew slowly for the first 4 months after planting. It appears the C plants took 4 months to overcome a transplant shock, which would explain why they flowered 3 months after the TC plants. Since the TC plants flowered in June, their fruit filled during the summer, compared with the September flowering of the C plants, which means that their fruit filled under much cooler conditions. The average fruit weight of 136 g for the C plants, compared with 200 g for the TC plants, would explain the large difference in bunch weight since there was no significant difference in the number of fruit per bunch.

For some unknown reason, the TC plants of one of the cultivars evaluated by Msogoya et al. in Tanzania also failed to fill, which would account for the -40% difference in bunch weight (lower left quadrant which includes the TC plants that flowered before C plants, but ended up with a smaller bunch). It's also not clear why, in the Daniells study in North Queensland, the TC plants flowered more than a week after the C plants but produced a bigger bunch (upper right quadrant). The data in figure 1 can be used to draw some general conclusions, but they also show variation in response, according to local conditions and the management regime.

I think the case for the greater ‘physiological efficiency’ of TC plants mentioned during the discussion on the ProMusa mailing list is largely unsupported. To test the hypothesis, I used the data on dry matter production from a study published by Eckstein and Robinson (1995). They compared the physiological response of TC and C plants during the first months after planting. I compared the relative growth rates R = (ln(W2) – ln(W1)/t2-t1)) during the first months after planting. The relative growth rate is akin to compound interest on money, except that here the time increment is daily. It expresses the amount of new growth, based on the amount of material already present and so is a measure of ‘efficiency’. The results show that the TC and C plants were essentially as efficient as one another: 3.0% a day for the leaves of TC plants compared with 3.3% a day for the leaves of C plants, and 2.7% a day for the roots of TC plants compared with 3.8% a day for the roots of C plants. Eckstein and Robinson found that TC plants had higher rates of photosynthesis than leaves of C plants, although this difference disappeared over the first few months. I like their explanation, which focusses on the growth of suckers that appeared earlier on TC plants and therefore likely demanded more photosynthates from the leaves of the parent. This explanation is then consistent with the calculations of relative growth rate for leaves and roots of the parent plant.

So TC, or not TC?  The results of this analysis suggest that there tends to be little difference in bunch weight between TC and C plants when they flower at the same time. The TC and C plants will flower at different times according to which type gets a ‘head start’ and in the subtropics, the season of planting. This implies that manipulating the planting date or developmental state of either type of planting material can be used to achieve market objectives. As long as pests and diseases are not an issue2 , there is no right or wrong answer to the TC or not TC question. If TC and C planting material are available (a balance that may reduce costs of establishing a new field) and it is necessary that they flower at the same time, TC plants can be planted later than C plants. The developmental state of the C plants can likely be modified by trimming but leaving more pseudostem so that leaves emerge more rapidly after planting. On the other hand, it may be desirable to spread the flowering and the subsequent harvest and so planting date and planting material can be mixed and matched accordingly.

I am grateful to colleagues who discussed the issues raised here and especially to Anne Vézina who helped get it into shape for a blog.