Loading...
News and analysis » The impact of extreme weather events on the price of bananas

A study explores the impact of extreme weather events on the price of bananas in the French market. 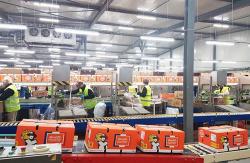 Bananas being prepared for the French market in Dunkerque. (Photo, UGPBAN)

When hurricane Maria swept through the French overseas department of Guadeloupe and Martinique last September, it destroyed the vast majority of the plants producing bananas for the French market. Shipments to continental France ceased for seven months, creating a shortfall of 200,000 tonnes. Even though the volume represents about a third of the bananas sold annually in France, the shelves were stacked with as many bananas as before. That is because the domestic demand for bananas was met by increasing imports from other sources, says Carolina Dawson, Senior Analyst at Market News Service, an economic research cell of CIRAD, the French agricultural research centre for international development.

Extreme weather events are expected to push prices up in importing countries by reducing supply. Except that if the supply is maintained by importing bananas from other producing areas, weather events alone might be not sufficient to have an impact on the import price (the price at which importers sell their unripe bananas in the weekly spot market, a market in which commodities are traded for immediate delivery).

This is what Dawson and the other authors of a study on the import price of bananas in the French spot market found. Even though weather events were the most common type of event associated with declines in exported volumes over the 2000 to 2015 period covered by the study, importers compensated by buying bananas from other suppliers. To the extent weather events have had an impact on prices, it was because they coincided with other events that also affected the supply (the volumes exported) and/or the demand for bananas in the importing country.

An example is the largest sustained spike in price recorded in the French market during the study period. It lasted nearly 9 months, from the last quarter of 2004 to the middle of 2005. The spark was a combination of climatic events (drought and storms in Colombia and severe winds in Cameroon) and a 30% drop in production in Guadeloupe due to strikes and conversion of banana plantations to other uses.

The decrease in supply coincided with a steady demand for bananas due to a spell of cool weather that affected the harvest of local fruits in Europe. In that part of the world, the price of bananas typically goes up in the coolest months, when demand for the tropical fruit is high and competition from local fruits is low, before dropping in the summer. In this case, with less competition from summer fruits, prices remained high.

On the political front, the accession in 2004 of 10 new States to the European Union, and a shortage in the number of newly introduced import licences, also helped keep the EU import prices high into the summer of 2005.

The authors focused on the French market because bananas are still in large part sold on the spot market. About half of the bananas imported to France are traded on the spot market, says Dawson. The rest of the banana market, including all the organic bananas, is locked up in contracts signed at the beginning of the year. Since spot prices reflect supply and demand, they provide an opportunity to examine the extent by which events affect that balance and translate into fluctuations in the import price.

The import prices came from the Weekly Banana Market Report compiled by the Market News Service. The import price is derived from weekly phone interviews with an extensive network of banana importers.

The weekly exportation volumes of dessert bananas came from national exporters associations, in the case of Ecuador, Colombia, Costa Rica and Guadeloupe, and from the quantities importing companies shipped, in the case of Ivory Coast and Cameroon. These 6 countries account for more than 90% of the French market's supply. The other reasons they were selected for the study are the availability of weekly data and the range of climatic regions they represent.

The inventory of events that could affect export prices was based on information sourced from trade publications — FruiTrop, ReeferTrends, Sopisco News, and FAO reports — complemented with insights from the scientific literature, key actors in the banana trade and analysts. The events were classified as exogenous (like volcanic eruptions, political events and weather events like drought, floods and hurricanes) and endogenous (like disease outbreaks, strikes by labourers and land conversion to other uses).

The analyses were performed by Daniella Blake, a consultant specializing in socio-economic analyses. She cross-correlated the events with the weekly import prices and export volumes, after filtering out the long-term trend and the seasonal fluctuations.

Even though weather events were the most frequent type of event associated with declines in export volumes, two of the six countries in the study, Ivory Coast and Cameroon, were generally spared. Most of the declines linked to a weather event, alone or in combination with another type of event, were observed in Ecuador, Colombia, Costa Rica and Guadeloupe, albeit with dissimilar impacts on the volumes exported. For example, unlike Guadeloupe, Ecuador can mobilize large quantities of bananas from one week to the next if need be, thereby masking the impact of weather events in its exports. Such surplus production at the global level, not only from Ecuador but also from other countries that have been increasing their productivity or getting back in the banana business, is what has been helping importing countries cushion the impact of extreme weather events.

But as Denis Loiellet, the head of CIRAD's Market News Service and co-author of the study, told CommodAfrica, there are signs that the global export trade might be heading towards a long overdue crisis of oversupply that will bring down prices. He pointed out that in Europe, the seasonal reduction in the price of a box of bananas started early this year, reaching a low of 3-4 euros in Poland.

If the high production capacity at the global level is not met with a strong demand for bananas, exporting countries may resort to reducing their exports… unless extreme weather events, which are expected to increase in frequency, get to the bananas first.