Colombia at a glance 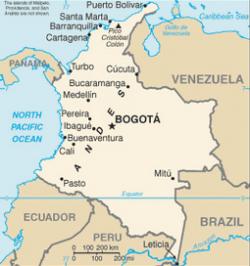 Colombia is the fourth exporter of Cavendish bananas. In August 2019, the Instituto Colombiano Agropecuario (ICA) confirmed the presence of tropical race 4 (TR4) in an area of 175 ha in Colombia's La Guajira department4 .  It is the first report of TR4 in Latin America5 .

The so-called Race 1 of Fusarium wilt is present. Although it affects Gros Michel, the cultivar is still produced in highland areas and sold on the domestic market.

TR4 was confirmed to be present in the department of La Guajira in 2019. It is the first report of TR4 in Latin America5 .

The government of Colombia declared TR4 as a quarantine pest in 20116 .