Ecuador at a glance 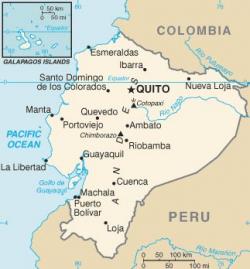 Ecuador is the world's largest exporter of bananas. In 2013, it produced more than 6.54 m tonnes4 , and exported more than 5.55 m tonnes for an estimated value of 2.37 billion USD4 . Bananas have consistently been Ecuador's main export after petroleum.

Three provinces produce most of the bananas for export: Los Rios, El Oro and Guayas. According to 2009 figures from the Ministry of Agriculture, 91% of the 170,897 hectares of commercial banana plantations were located in these provinces5 .

Between January 2012 and February 2013, the banana-producing area fell from 200,000 hectares to 171,000 hectares, according to a survey from the country’s Ministry of Agriculture, Livestock, Aquaculture and Fishing6 . The drop was atributed to production difficulties linked to black leaf streak, competition from cheaper fruit and issues with the country's banana farm legalization process. Despite the loss of 29,000 hectares, the country’s exports only fell marginally from 190 million boxes between January and September in 2012 to 189 million boxes during the same period in 2013.

Most of the export supply is controlled by large growers with high level technical skills. The medium to large size structures are mostly located in the Los Rios region where cultivated areas are increasing strongly with large planters using former cacao plantations with very rich soils.

However, 30% of the plantations are in the hands of  5,000 small producers who sell their production to large exporting groups through a cooperative system. In El Oro province, the production structure is very traditional. Small planters cultivate small scattered fields on hilly lands 7 .

The North zone encounters climatic constraints such as rainfalls which induce strong attacks of black leaf streak disease that seriouly weigh on yield7 .

Ecuador dominates the international trade of bananas. More than 60% of the production is exported to two main markets: the European Union and the United States of America. It also supplies Russia and Asia.

Ecuador is the only country in the world to impose a mandatory minimum official price to be paid to farmers8 .