Banana inflorescence at a glance 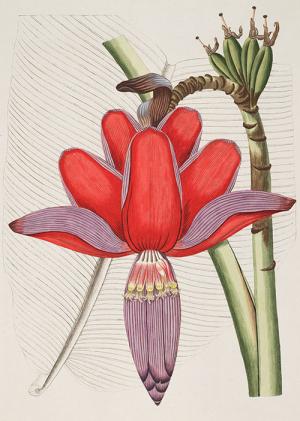 This is true of both wild species of banana and the cultivars that have been domesticated for edibility, although in the latter the fruit develops parthenocarpically (in the absence of pollination) and is seedless. In wild species, pollination is required for the ovules to develop into seeds, which in turn stimulates pulp development. The flowers that don't receive pollen develop into scrawny fruits.

Banana flowers are arranged in clusters (called hands) on the peduncle, the stalk that supports the inflorescence. The female flowers are located near the base of the peduncle and the male ones at the distal end. Each hand of flowers is enfolded by a bract that lifts at anthesis, when the flowers have finished developing. 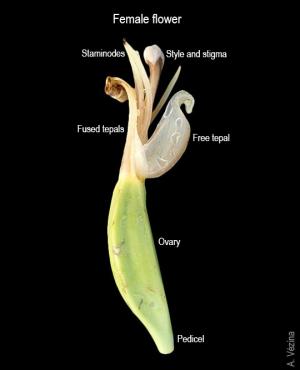 Female banana flowers have a massive style and stigma, and stamens which are usually reduced to staminodes that do not produce pollen. Sometimes the male organs are absent.

The enlarged basal portion which contains the ovules is called the ovary (from the Latin's ovum, meaning egg).

The stigma is the receptive tip of the carpel, which receives pollen and on which the pollen grain germinates. The stigma is adapted to catch and trap pollen.

The collective term for the parts of the flower that produce ovules and ultimately develop into the fruit and seeds is gynoecium (from the Greek gyne, meaning women’s, and oikos, meaning house).

Each flower is connected to a cushion of tissue on the peduncle by the pedicel.

The female flowers reach anthesis (the period during which a flower is fully open and functional) before the male flowers. 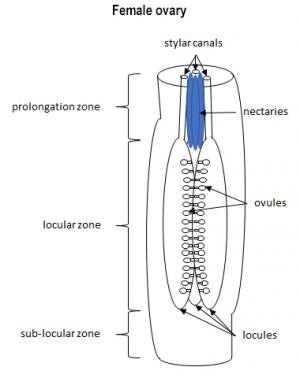 The ovary of female flowers can be divided into three sections along its length: the sublocular, locular and prolongation zones.2   These three zones are indistinguishable externally.

The sub-locular section is usually small, carries vascular bundles and connects the ovary to the pedicel which attaches to the cushion on the peduncle.

The locular section is divided into three chambers or locules that contain the ovules that are embedded in a mucilaginous gel. An ovary may contain 200 to 300 ovules, which in wild species can potentially develop into that many seeds.

The prolongation zone contains the nectary tissues and ducts that secrete nectar, as well as the stylar canals each arising from a locule. These stylar canals fuse when they enter the style.2 Cross section of an ovary of Musa basjoo showing the three locules. The inset shows the micropyle, the opening through which the pollen tube enters the ovule.

When a pollen grain lands on the stigma, it germinates into a pollen tube that is guided down the stylar canal to one of the three locules, where the ovules are located. Each ovule is attached to the central placenta and contains the egg cell and a micropyle, through which the pollen tube enters to fertilise the ovule (see photo).

In wild species, the fruit will contain seeds if the flower was pollinated.

In edible bananas, the ovary develops into a seedless fruit by parthenocarpy (without being pollinated). The tiny black dots in the centre of the fruit are the remnants of the ovules. 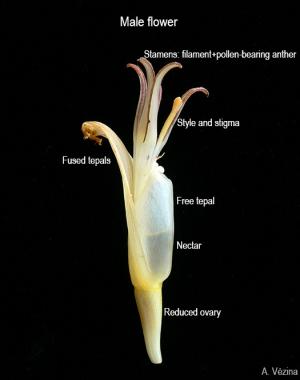 Male banana flowers have a slender style and stigma, and well-developed anthers, which in wild species usually contain pollen. In edible bananas, the amount of pollen is reduced or absent.

Together, the anther and the filament form a stamen. A male banana flower typically has five stamens.2 Collectively the stamens form the androecium (from the Greek andr-, meaning man, and oikios, meaning house).

The style, stigma and male parts of the banana flower are enveloped within a tubular structure formed by fusion of five petal-like tepals, with a sixth tepal remaining free.

The gynoecium is much smaller than in female flowers. Male flowers do not have ovules but they have nectaries. The quantity of nectar and its sugar concentration is lower than in female flowers. In wild banana species, the nectar attracts pollinators, mainly bats and birds. Edible bananas do not need to be pollinated, but because their flowers still produce nectar they are visited by animals and insects.

The male flowers are contained in the male bud, in which they are arranged in clusters called hands. Each hand is enfolded by a bract that lifts when the flowers have finished developing. Male flowers usually fall to the ground a short time after flowering.

In some wild species, the basal fruit-forming flowers have a functional gynoecium and androecium, and can self-fertilise before bract opening if the stigma and anthers are aligned. These flowers are called hermaphrodite or perfect.

The term hemaphrodite has to be used to describe basal flowers in Musa acuminata ssp. banksii3 , Musa acuminata var. chinensis4 , Musa boman3 , Musa hillii5 , Musa ingens3 , Musa schizocarpa3 and Musa yunnanensis4 , but the term may not be referring to the same type of flower in all cases, based on the description or lack thereof.

The ability to self-fertilize is significant because it reduces hybridization and as such contribute to genetic isolation. Norman Simmonds noted that the occurrence of basal female flowers with male fertility may have adaptive significance at the edges of a species’ range as it would bias seed set towards selfing if populations of plants were distant from one another.

Other types of flowers

In some edible bananas, there may be flowers at the point of transition from the basal female to the distal male portion of the inflorescence that do not produce fruit and have a small ovary, although it is larger than in male flowers. These flowers may retain some features of fruit-forming flowers, such as remaining attached to the peduncle. Such flowers are called neuter or intermediate. They are also described in some wild species, where they can be neuter or functionally male.

Typically, male flowers are about 60% of the size of female flowers, although there can be considerable variation from one species to another (see chart).

In wild species of banana, the flowers provide the structure for sexual reproduction, which occurs when pollen produced by the anther of a male flower fertilises the ovule in a female flower to produce a viable embryo.

Second, once on the stigma, the pollen grains need to be ‘recognised’ in order to germinate. The tube emerging from a germinated pollen grain responds to chemical signals that guide it down the canal in the centre of the style to reach one of the three locules where ovules are located. Further guidance is needed to get a pollen tube to an available ovule to form a viable embryo.

The fertilised ovule containing the viable embryo develops into a seed. This in turn stimulates pulp development around the seeds in the ovary, resulting in a seed-bearing banana fruit. In a wild species a fruit might contain up to 300 seeds.

The nature of the banana inflorescence is that female flowers are separated in space and time from male flowers. In this case, pollinators are essential for seed production.

Since the tepals are not colourful and nectar is abundant, the main pollinators are bats and birds.22 Banana flowers are visited by numerous species of insects and some animals but these are not involved in pollination.

In edible bananas, sexual reproduction is rarely successful, with very few if any seeds produced as a consequence of pollination. This failure is multifaceted, due to a greater or lesser extent to a lack of viable pollen, disruption of the pollen pathway through the gynoecium in the female flower and a lack of viable ovules.

Instead, the fruit of edible bananas develop through vegetative parthenocarpy, with the pulp developing autonomously from tissues on the ovary wall of the female flower without the need for pollination.