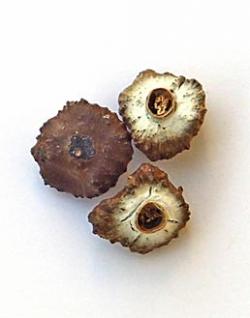 The banana seed contains the embryonic plant that will develop into a seedling. The formation of the seed is part of the process of sexual reproduction, which involves the fertilization of an ovule (located inside the portion of the female flower called the gynoecium) by pollen produced by male flowers.

In dry mature seeds, the hard, leaky outer layer of the coat (the outer integument) acts like a cage, while the thin inner layer of the coat (the inner integument), which is lined with a cuticle,  is impermeable to water and provides an almost complete envelope surrounding the embryo and endosperm. Only wild species of bananas — and under certain circumstances cultivars that have residual fertility — produce seeds. 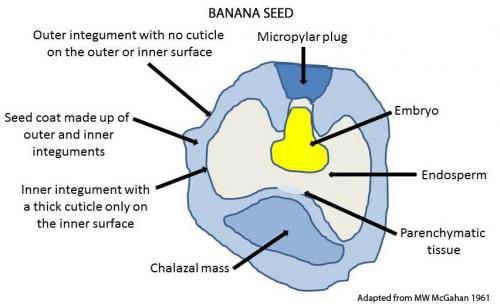 The seed, like the one of the wild species, Musa balbisiana, has an extremely durable, wrinkled coat, the only opening of which is sealed by a shortened conical micropylar plug, also called an operculum (see figure). The seed coat consists of a thick hardened, but leaky, outer integument, and a thin inner integument, on the inner surface of which is a thick cuticle. Seeds of wild bananas are usually less than 1 cm in diameter1 .

While size, colour and shape varied, a study of 20 species of wild and edible bananas found this basic seed structure and anatomy in all of them5 .

The water content of fresh banana seeds ranges from 31 to 46%, falling to below 10% when seeds are dried at around 20oC5 . The chalazal mass, which in fresh seeds was observed to be "full of water", shrivels upon drying5 .

The basic external requirements for germination are water, oxygen and an appropriate temperature. The germination of a seed begins with water uptake (imbibition), followed by embryo expansion along its axis through cell elongation, and ends with the breaking-through of the seed coat by the embryo root (radicle), then shoot (plumule). In the banana seed, the endosperm disappears within two weeks and within three weeks, the seedling has a lateral root system, and a prominent shoot6 , in which the first leaves have elongated beyond the cotyledonary sheath7 . By the fourth week, the seedling is dependent on the root system for inorganic nutrition6 . 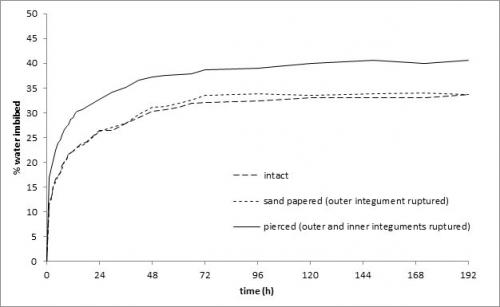 Water uptake, measured as increase in weight, by intact sand-papered and pierced Musa acuminata seeds. The seed coat was pierced adjacent to the chalazal mass. Sand-papered seeds were abraded between the micropylar plug and chalazal mass. (Data from Wattananchaiyingcharoen 1990)

Water must enter the chamber containing the embryo and endosperm before germination can occur. Experiments have shown that the seed's outer integument is leaky since rupturing the outer integument of Musa acuminata seeds by sandpapering did not increase the absorption of water.   During imbibition, the weight of the sandpapered seeds increased by the same proportion (33%) as the one of intact seeds (see graph)8 .

On the other hand, piercing with a needle the outer and inner integument (with its cuticle) led to a more rapid absorption of water and an additional 7% increase in weight 8 , consistent with the inner integument being a barrier to water movement into the chamber containing the embryo and endosperm.

The structure of the banana seed with its leaky outer integument means that the seed imbibes but the embryo and endosperm might not absorb water because of the impermeable inner integument and non functional water gaps.

A seed has one living component, the embryo. To germinate, not only does the embryo have to come into contact with water, the seed also has to be non-dormant.

Opinions on dormancy in banana seeds differ. The embryo of Musa balbisiana, for one, has been said not to have dormancy11 because it is easy to culture embryos excised from fresh seeds12 . Usually, more than 90% of these excised embryos of Musa balbisiana grow into plantlets13 . On the other hand, only 68 to 75% of embryos excised from fresh seeds of Musa acuminata developed into plantlets13 ; whereas in studies using seeds from the products of open-pollinated wild bananas and interspecific crosses13 , dried seeds of Musa acuminata14 , and crosses between East African highland banana cultivars and Calcutta 415 , the success rate of embryo culture was well below 50%. These observations suggest that, in edible bananas and some wild banana species, dormancy may have a role in preventing embryo growth into plantlets.

It is likely that there are different types of dormancy among Musa species, with contributions from the seed coat and the embryo. The necessary experimentation to clearly define the roles of the coat, embryo and other tissues in dormancy have not been done, but that banana seeds can become dormant appears beyond doubt16 .

In their natural habitat, humid tropical forests, banana seeds may lie viable for years, often germinating at the same time and in large numbers when soil is disturbed or vegetation removed17 . The higher temperature of exposed soil in gaps in the forest suggests that temperature is a cue for banana seeds to germinate. Under greenhouse conditions, the germination of Musa balbisiana seeds was greatest when temperature fluctuations were large18 .

It is not known, however, how seeds sense temperatures that lead to germination. Work on Arabidopsis thaliana showed that increasing gibberellin (GA) content and decreasing abscisic acid (ABA) content in the seed promoted germination, and vice versa, and that interactions between ABA and GA played key roles in regulating germination at different temperatures19 . Incubating intact fresh hybrid AA diploid seeds (Pisang Jajee x Musa acuminata ssp. burmannicoides) in GA for several days before embryo culture resulted in an increase in embryo germination rate in vitro20 , although the mechanism is unclear.

Growth of the embryo

The first visual evidence of germination is the expulsion of the micropylar plug from the micropylar canal. The plug is forced out cleanly along a line of "predetermined breakage" (the abscission layer)6 1 by pressure exerted by the axial expansion of the embryo, perhaps assisted, at least in fresh seeds, by pressure resulting from the absorption of water from its environment by the chalazal mass.

In laboratory-based studies, the exudation of a drop of brownish fluid from the micropyle has been observed to precede the expulsion of the micropylar plug6 8 . This drop may be the consequence of a build-up of hydrostatic pressure in the chamber containing the embryo and the endosperm as the embryo begins to expand, forcing fluid in the seed cavity through breakage points around the micropylar plug. This is loosely analogous to guttation in non-transpiring leaves in that hydrostatic pressure is the driving force for the exudation.

Studies using ruptured seed coats show that the expanding embryo emerges through the rupture18 8 , the path of least resistance, suggesting that some force is needed to dislodge the micropylar plug16 . In nature, the need to exert a force might select against embryos that would otherwise grow into seedlings that are "less fit"16 . If this is the case, bypassing this step by excising embryos and culturing them will include any such less fit seedlings16 .

When edible bananas that have residual fertility are used in breeding, the number of seeds produced is generally low to very low. Both seed viability and seed dormancy can impact on germination rates. In a study of the products of crosses between 20 East African highland banana cultivars and Calcutta 4, the number of seeds per bunch ranged from 3 to 26, with an average of only 9 seeds per bunch. Of these seeds, only 42% had embryos, of which only 9% germinated following embryo extraction and germination in vitro15 . Whether this low rate of germination reflects low embryo viability per se or embryo dormancy is not known.

Identifying viable seeds has also proved difficult. In the same study, the presence of a hard outer integument (hard black seeds) was used as a predictor of viability. Whereas 72% of the small number of seeds harvested from the 20 pollinated East African highland banana cultivars met this criterion, only 59% had an embryo15 . As such, less than half of the harvested seeds were potentially viable.