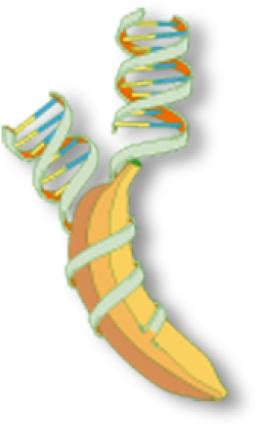 The Global Musa Genomics Consortium was an international network of scientists applying genomics tools to the banana that was established in July 2001 during a meeting held at the National Science Foundation in Arlington, in the US1 . INIBAP, as Bioversity International's group on bananas was then called, was nominated to act as the Secretariat and its director, Emile Frison, became the Consortium's first coordinator. In 2006, he was succeeded by Bioversisty International scientist Nicolas Roux. In 2012, the Consortium achieved one of its main objectives, the sequencing of the Musa genome2 .

In November 2015, the Consortium was integrated into the global Musa genetic resources network MusaNet, becoming its fifth thematic group. At the time of the merge, the Consortium was composed of 70 scientists from 40 institutions located in 24 countries.

Role in the sequencing of the genome

One of the objectives of the Consortium was to have the Musa genome sequenced within 5 years. In 2008, the Consortium submitted a proposal to the US Department of Energy's Joint Genome Initiative. After JGI passed on the banana3 ,the French National Research Agency (ANR) announced in the fall of 2009 that it would fund the project4 . The sequencing was done by the French sequencing centre Genoscope, in collaboration with the French Agricultural  Research Institute for Development CIRAD, under the umbrella of the Consortium. The accession selected for sequencing is DH Pahang5 .

The results of the sequencing were published in Nature2 .

One of the operating principles of the Consortium was to ensure that, whenever possible, the resources developed by its members are placed in the public domain. These resources continue to be available to the scientific community.

The Musa Genome Resource Centre (MGRC) based at the Insitute of Experimental Botany (IEB) conserves and distributes genomic resources to the scientific community.

The IEB also provides genotyping services (i.e. Ploidy, SSR, ITS, FISH)  to the international Musa community under the auspices of Bioversity International.

Bioinformatics resources developed by the community, such as The Banana Genome Hub and Greenphyl, are accessible from the SouthGreen Bioinformatics Platform6 .

In 2013, the Consortium management committee tasked Bioversity International and CIRAD to organize a training course on the open-source bioinformatics tools they had been developing for the banana7 .

Participation at the Plant and Animal Genome conferences

Since 2005, a workshop on Musa genomics is held at the annual Plant and Animal Genome conference in San Diego8 . Organized by Bioversity, the session usually consists of 5 to 6 invited speakers presenting the latest findings on genomics applied to Musa. Traditionally, an evening meeting is also held during the conference to summarize the major achievements of the previous year and identify new opportunities and challenges.

Bridging the gap between genomics and breeding

The Consortium also ensured that the resources generated by its members are useful to other scientists, especially breeders. To this end, in 2009, it organized a workshop on Genomics & Breeding at the ISHS/ProMusa symposium that brought together breeders and scientists working in genomics. The participants were asked to identify their respective needs and prioritize the activities that would help bridge the gap between genomics and breeding. The summary of the discussions was published in the proceedings of the symposium9 .