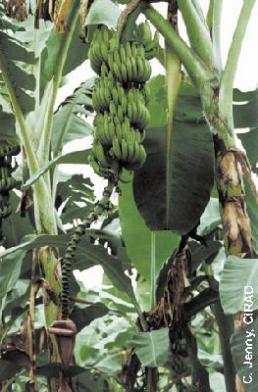 Gros Michel is the name of a subgroup of dessert bananas in the AAA genome. It is named after the Gros Michel cultivar, the banana that dominated the international trade during the first part of the 20th century. In the late 1950s it was replaced by Cavendish cultivars because of its susceptibility to Fusarium wilt, which was first reported to be in Central America in the 1890s.

Molecular analyses of accessions in collections have revealed that the cultivars in the Gros Michel and Cavendish subgroups are half-siblings, that is they have a parent in common, the one that contributed both copies of its genome (triploid bananas are derived from a cross between two diploid (2n) parents — one which normally passed on one copy of its diploid genome, whereas the other contributed both copies (2n), a phenomenon called meiotic restitution). The 2n donor is a cultivar in the Mlali subgroup, a group of diploid bananas currently found in East Africa only. The closest living representative related to that ancestral Mlali cultivar is Chimoili Kana Nkoboï1 , not Akondro Mainty as previously thought2 .The parents that contributed the n gamete were probably different, but genetically close, culitvars from the Khai subgroup1 . Since  triploid bananas are for all practical purposes sterile, from that point on diversity was created by natural mutations. The Gros Michel subgroup is essentially composed of cultivars that diverged from each other through mutations.

Cultivars in the Gros Michel subgroup can be easily confused with Cavendish cultivars. One of the distinguishing characters is the green or pale pink colour of their underlying pseudostem sheath, compared to the bright red one of Cavendish cultivars.