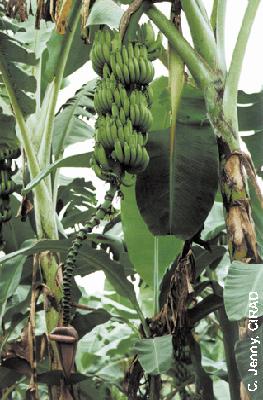 'Gros Michel' entered the historical record in the 1830s when a French planter, Jean Pouyat, noticed the plant growing on the Caribbean island of Martinique3 . Locally, it became known as the 'Martinique banana' or the 'Pouyat banana'. It spread through the Caribbean and beyond. By the 1890s, it was cultivated all along the Caribbean coast of Central America. By the turn of the 20th century Gros Michel made up the bulk of of the exports to the US. According to the historian John Soluri, the success of the Gros Michel mainly reflected the interests of traders, who liked its big bunch, bruise-resistant peel and ability to withstand the long journey from farm to market3 .

The first losses followed soon after Fusarium wilt was reported in Panama and Costa Rica in the 1890s (the strains that cause disease on Gros Michel would later become known as race 1). As the disease spread through Central America, aided by growers unwittingly using infected planting material, only the availability of vast areas of virgin land prevented an early collapse of the industry. The opening of new land to make up for the abandoned plantations (estimated at more than 40,000 ha3 ) allowed production to keep ahead of the disease. But as uninfected and accessible land became increasingly rare in the the mid-1950s, production costs in Central America soared.

Even though resistant cultivars had been identified as early as 1910, the export industry did not begin to replace the susceptible Gros Michel banana until the late 1950s3 . The change was motivated by the entry of Ecuador as a major banana exporter in the 1950s4 . To compete with the cheap Gros Michel from Ecuador, the infested soils of Central America were planted with resistant Cavendish cultivars. Gros Michel has not completely disappeared, however. It is still grown by smallholder farmers, in backyard gardens and mixed cropping systems.

The long and bare peduncle hangs vertically and is distinctively curved below the bunch. The fruit is long (18-23 cm) and straight for most of its length. The fruit apex is slightly tapered.

To browse accession-level information on 'Gros Michel' in MGIS
Journey to Banana Land, a 1950 20-minute film showing how Gros Michel was grown, harvested, cleaned and shipped to the US