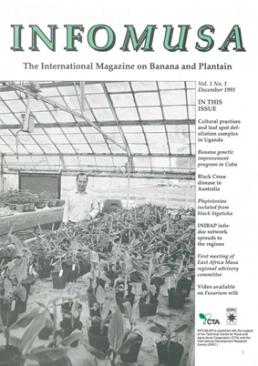 INFOMUSA was a periodical devoted entirely to bananas. It was launched in 1991 by INIBAP and ceased publication in 2007. It was published twice a year in three languages (English, French and Spanish) and distributed free of charge. Between 1998 and 2002, it published as an insert the newsletter of the recently created ProMusa, the global programme for Musa improvement1 .

When ProMusa was restructured in 2007, it adopted the name InfoMus@ for its electronic newsletter.

The first issue of INFOMUSA was published in December 1991 by the recently created INIBAP network. Its original mission was to keep readers informed of the network's activities and research findings. Contributors from all over the world were also invited to report on their own activities.

Over the years, the number of articles structured as scientific articles increased. The template was redone in 2003 and the word magazine replaced by journal. Although the journal was not listed among peer-reviewed journals, the articles were reviewed by an editorial committee.

INFOMUSA was published twice a year in English, French and Spanish. The PDFs of each issue can be downloaded from the table below.

The last issue of the newsletter was published electronically in 2003:
ProMusa newsletter No. 10 (English, French, Spanish)