No end to the banana

No end to the banana is a travelling exhibit that looks at the diversity of bananas, and at who uses them and for what. It also shows how research can help use this diversity to increase options for both small-scale farmers in the developing world and consumers in industrialized countries. The exhibit concludes by challenging people to reflect on the type of banana they are eating and the one they could ea1 t.

The exhibit was produced by Bioversity International, in collaboration with partners, and was inaugurated in Leuven, Belgium, as part of the celebrations surrounding the 20th anniversary of INIBAP. Between 2005 and 2010, it was showcased in a number of botanical gardens in Europe, the US and Canada. A French version was produced in 2007. In 2006, No end to the banana won the award for best exhibit given by the Association for Communication Excellence in Agriculture, Natural Resources, and Life and Human Sciences.

Overview of the exhibit

All over the tropics, people grow a feast of bananas that the rest of the world never sees! There is more to the banana than the Cavendish banana plucked from obscurity in the 1950s to become the industry standard. Although the export banana is grown in large monocultures and appears in supermarkets all around the world, it accounts for one in eight… or 13% of the some 100 million tonnes of bananas produced each year.
A herb disguised as a tree
Bananas do not grow on trees. The banana plant is a herb. What looks like a trunk is actually a false stem, a pseudostem, made from the overlaying of leaf sheaths.
A care-free crop
Bananas are popular with farmers because they are easy to grow and do not need to be replanted each season. They are the backbone of food and income security. India, the world’s largest producer, grows as many bananas annually as the rest of the world produces for export.
A fundamental food
Because bananas are always in season, they provide a continuous source of food between other crop harvests.
The growers
The majority of bananas are grown in home gardens or farms of one hectare or less. Caring for the subsistence crop is often the responsibility of women while men attend to the cash crop.
A source of well-being
Bananas are packed with energy and they are one of the best-known sources of potassium, a mineral essential for the proper functioning of the heart and other muscles. Yellow- and orange-fleshed bananas are also good sources of precursors of vitamin A, a micronutrient vital for good health.
A versatile fruit
The banana is widely known as a sweet fruit to be eaten raw, but many varieties are fried, roasted, juiced, dried or chipped to make healthy and affordable snacks and street foods.
An all-purpose plant
Products made from the different parts of the plant are also a much needed source of income. Banana fibre extracted from the stem appears in paper, bank notes, ropes, clothes, wall hangings, baskets and hundreds of artistic endeavours. Banana leaves are also used to wrap anything and everything, but especially food.
A revered plant
The many uses of banana have been celebrated by people since ancient times. In India, the Hindus worship the banana plant during certain times of the year and use it to decorate shrines.

Why so many bananas?

Scientists believe that bananas were among the first plants to be domesticated some 10,000 years ago, giving farmers plenty of time to work with nature and come up with more than 1000 varieties.
Meet the parents
Although some 30 species of wild Musa have been identified from the Pacific to India, the majority of today’s bananas are related to either Musa acuminata or Musa balbisiana or both.
The big bang of domestication
Domestication diverted the original function of the banana, which is to deliver seeds. Once in a while, fruits with more flesh than seeds appeared by natural mutation and were nurtured by farmers.
The age of diversity
When acuminata and balbisiana bananas crossed paths, carried by migrating peoples, all sorts of edible varieties were produced. Even though the new varieties were sterile, they continued to change through mutations. By propagating their favorite mutants, farmers created bananas to suit all sorts of tastes and uses.
The birthplace of domesticated bananas?
Domesticated banana plants produce microscopic stones, phytoliths, which are used by archaeologists to look for the places where bananas were domesticated. The oldest remains, estimated to be 7000 years old, have been found in the highlands of Papua New Guinea.
Conserving diversity
The largest collection of bananas in the world is located in Belgium, at the Catholic University of Leuven. Since cultivated bananas do not produce seeds, they are kept as plantlets in test tubes, fed a special diet and maintained under low light and low temperature to slow down their growth.
Preserving identity
Although bananas are among the easiest plants to propagate vegetatively they need to be checked regularly as spontaneous mutations do occasionally occur. Deep-freezing the plantlets avoids the need for culturing them. Scientists have managed to freeze banana plantlets and bring them back unharmed.
Understanding diversity
The natural talents of some banana plants to resist diseases or thrive in marginal environments are increasingly in demand. The traditional way to pick winning varieties is to see which ones perform best under a given set of conditions. A quicker way is to look for strings of DNA that are present only in the plants that have the desired traits.
Reading the genome
To unlock the diversity lurking in wild bananas, a group of scientists was brought together under the umbrella of the Global Musa Genomics Consortium to share the task of sequencing the banana genome of Musa acuminata and Musa balbisiana and uncovering the function of their genes.

What kind of future for the banana?

Almost everywhere, the quantities of bananas harvested are falling short of their potential, in great part because of pests and diseases. While large commercial plantations can pass on the cost of protecting the crop to their customers, the livelihoods of small-scale farmers buckle under the strain of declining production, driving some to give up on the more disease-prone varieties and others to give up growing bananas altogether. The diversity of bananas is also threatened by the pressure to grow marketable varieties and the popularity of imported foods.
The banana’s number one enemy
The main threat to bananas worldwide is a fungus that causes black leaf streak disease, commonly known as black Sigatoka. Left unchecked, the disease can reduce harvests by half or more. By attacking the leaves, the fungus disrupts the process of photosynthesis that feeds the growing bunch.
The revenge of the fungus
Fusarium wilt, commonly known as Panama disease, is an essentially untreatable disease that wiped out the plantations of Gros Michel export banana and led to its replacement by resistant Cavendish bananas. A new form of the soil-dwelling fungus capable of attacking Cavendish bananas has since appeared in Asia.
The hidden perils
The banana plant is eaten from within by all sorts of small organisms invisible to the eye. Microscopic worms, called nematodes, attack the roots of the banana plant. Viruses and bacteria can also cause devastating diseases.
The future is already in nature
Many of the solutions to the banana’s pest and disease problems can be found among things farmers used to do, such as growing a diversity of crops and cultivars and using compost or manure as fertilizer.
Hungry for improvement
Seedlessness made the banana palatable but difficult to breed. Breeders take advantage of the residual fertility of some cultivars and cross them with wild species that have a sought-after character, such as disease resistance.
A breeding breakthrough
The first centre to succeed in producing banana hybrids was the Fundación Hondureña de Investigación Agrícola in Honduras. Banana breeding progammes have since been started in Nigeria, Brazil, Cameroon, India, Uganda and France, but you can still count all the banana breeders in the world on the fingers of two hands.
Tailor-made bananas
Genetic modification offers the possibility of injecting one or several useful genes into a plant without changing its existing characteristics. Since bananas do not produce pollen, they cannot donate the introduced genes to other plants.
Use it or lose it!
Farmers used to grow a diversity of bananas to satisfy their different needs, uses and tastes. This environmentally-friendly tradition can be hard to sustain as the pressure on farmers to grow marketable varieties increases.

No end to the banana was displayed in various locations in Europe, the US and Canada. In 2007, a French version was showcased at the Agropolis Museum in Montpellier, France. Both copies are currently at the Bioversity International office in Montpellier. The Belgian university KULeuven also has an English copy.

PDF of the text of the exhibit in French and English 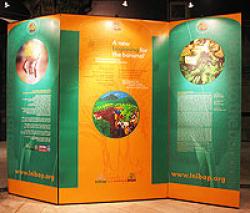 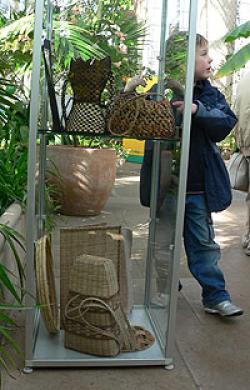 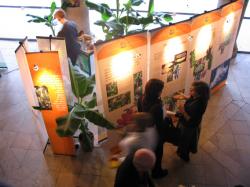 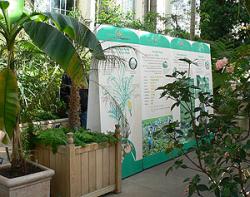