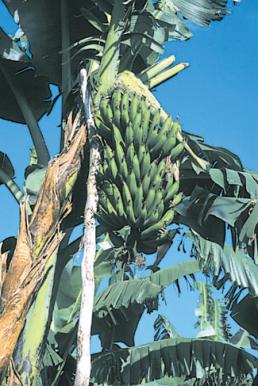 East African Highland Banana (EAHB) is one of the names used to designate a subgroup of triploid (i.e. they have 3 copies of each gene) cooking and beer bananas. As the name indicates, these cultivars grow best in highland areas (between 1,400 and 2,000 meters). The other name, given by Kenneth Shepherd, is Mutika-Lujugira1 .

These bananas can be eaten ripe as dessert bananas, but their pulp is rather insipid. The subgroup accounts for the majority of the bananas grown in Uganda, where they are popularly known as matooke, after the traditional meal made from steamed bananas. Tooke is the Luganda word for banana and matooke its plural form2 . EAHB cultivars are also grown in Burundi, the Democratic Republic of Congo, Kenya, Rwanda and Tanzania.

Deborah Karamura's 1999 analysis of accessions from Uganda revealed 84 cultivars that she divided into five clone sets3 . The total number of cultivars is higher as this type of bananas is also grown in Burundi, the Democratic Republic of Congo, Kenya, Rwanda and Tanzania4 . This high diversity is the product of mutations being selected by farmers (see Domestication of the banana)5 .

Phytolith evidence suggests that the ancestors of this subgroup arrived on the African continent as long as 6,000 years ago (4,000 BC)6 7 . However, the identification of these phytoliths as belonging to bananas has been questioned8 . The dating of the phytolyths are also disputed since it would mean that bananas were introduced to the east coast of Africa before the emergence of agricultural landscapes at the end of the first millenium BC. The large diversity of EAHB cultivars suggests a long period of selection by farmers9 .  The first bananas are estimated to have been introduced to the African continent by Austronesian-speaking people at the beginning of the Common Era, some 2,000 years ago10 .

A molecular study indicates that the diversity of EAHB cultivars could be derived from as few as one introduced cultivar tracing its origins to the wild species Musa acuminata ssp. zebrina and Musa acuminata ssp. banksii, and to a lesser extent Musa schizocarpa11 . The area between the islands of New Guinea and Java has been proposed as the center of origin for the ancestral cultivar(s)12 .

The pseudostem is characteristically dark, its colour varying from brown to black.

The male bud is a dull purple-brown.

The male flowers have pink anthers and an orange stigma. The lobe of the compound petal is yellow.

Nfuuka means "changing". The cultivars in this clone set are morphologically unstable. It is the most heterogenous of the clones sets and also contains the greatest number of cultivars.

The bunch is compact and hangs at an angle that varies from slight to 45 degrees. Fruit are medium in size fruit and point up at an angle. The tip of the male bud is not imbricated, i.e. the bracts meet at the tip. The rachis is generally bare.

Musakala means "lax", which refers to the spacing between the fruit.

The Musakala clone set includes the high-yielding cultivars that are grown commercially to supply urban markets.

Nakabulu means "short and plump". The bunch is compact and the fruit are short and jut out at a right angle. All the fruit ripen simultaneously.

The cultivars in this clone set resemble enset in that the bracts and floral bracts of the male flowers persist on the rachis. The male bud is imbricated. Fruits have persitent style and stamins.

Mbidde means beer. The cultivars in this clone set can have characters of other clone sets but they all have in common that their pulp is bitter and astringent. The latex is plentiful and sticky, and the pseudostem is darker.

EAHBs are generally susceptible to black leaf streak, nematodes, streak disease and banana weevils. Like all cultivars, they are susceptible to Xanthomonas wilt and bunchy top.

They are generally resistant to the race 1 and 2 strains that cause Fusarium wilt. Preliminary results suggest that they might also be resistant to TR4.

In the 1990s, the National Agricultural Research Organization (NARO) of Uganda and the International Institute of Tropical Agriculture (IITA) started collaborating on the development of high-yielding and disease-resistant hybrids named after them: the NARITA hybrids.