Loading...
News and analysis » With a little help from (functional) biodiversity 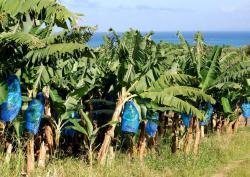 Photo by Mathieu Rouard
The farmers of Guadeloupe and Martinique in the Caribbean are all too familiar with the perils of growing bananas as a monocrop. As is usually the case, pest numbers went up and pesticides were brought in to control them. The results have been a contaminated environment, increased production costs, as well as stagnant yields and revenues. In Guadeloupe, the surface area cultivated in banana shrank from 8,000 hectares in 1981 to 3,000 in 2006.


In the 1990s, a series of bans on pesticides used against weevils and nematodes initiated a search for more sustainable and less damaging alternatives for producing the export crop. Many of the innovations developed by scientists at the French agricultural research centre CIRAD are variations on well-known cultural practices, such as intercropping, improved hybrids, cover crops, clean planting material, crop rotations and fallows, that can be applied individually or in combination. For example, combining a crop rotation, or a fallow period, with the use of tissue-culture plantlets has proved especially successful in reducing the use of nematicides.

Planting a cover crop is usually done to control weeds or soil erosion, but it is also shaping up to be a useful addition to the toolkit of agroecological innovations for keeping soil-dwelling pests in check. The working hypothesis is that increasing the diversity of plant food resources will have a knock-on effect on the diversity and abundance of herbivorous species and of their predators. A more complex food web with more predators at the top will result in a better regulation of crop pests. That’s the theory. Its translation into practices that farmers will adopt, and benefit from, is somewhat more complicated.

For one thing, not any plant species will do, says Philippe Tixier, a CIRAD scientist using his knowledge of ecological processes to make agricultural systems more sustainable and resilient. He gives the example of cover crops that increase the abundance of predators which, instead of going for the crop pests, prey on other predators, a phenomenon known as intraguild predation. Another unwanted outcome is when the new resource is consumed by the pests themselves, resulting in more of them.

To select cover crops for field evaluation, Tixier and his colleagues ran simulation models into which they fed parameters measured on 11 candidate species. The objective was to select species that competed with weeds, but not with the banana plant. The cover crop also needed to be tolerant to shade. The species that performed best in the virtual banana plantation were then planted in experimental plots at the CIRAD Rivière Lézarde Research Station in Martinique.

To test the impact on nematodes, banana were planted in a former plantation that had been left fallow for a year, long enough to considerably reduce the abundance of plant-parasitic nematodes. Four cover crop species were tested: Bahia grass (Paspalum notatum) and three legume species (Neonotonia wightii, Pueraria phaseolides and Stylosanthes guianensis). The other treatments were bare soil (plots in which herbicide was regularly applied), and spontaneous cover (plots in which the natural vegetation, a mix of grass species, was allowed to grow back). Data were collected two years later.

The abundance of nematodes (the plant-parasitic ones as well as the free-living ones that feed on bacteria, fungi and other organisms, including nematodes) was measured in each plot. The plots with a cover crop had, as expected, more predators than the bare soil ones, but the effect varied with the cover crop. The plots with a grass cover crop had less parasitic nematodes, but more root-hair feeders, bacterivores and fungivores, than the plots with a legume cover crop, as well as more omnivorous predators, although not as many carnivorous ones. The greater number of omnivores observed in these plots suggests that they were responsible for keeping the number of nematode pests down. Moreover, some of the legume cover crops probably turned out to be good hosts for some of the parasitic nematodes, namely P. phaseoloides for the spiral nematode Helicotylenchus multicinctus and S. guianensis for the root-knot nematodes Meloidogyne spp. 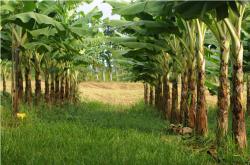 Photo by Philippe Tixier
Another set of experiments highlighted the role of the cover crop in supporting non-pest populations that act as alternative prey to predators of banana pests. The cover crop was Brachiaria decumbens (Signal grass) and the predator a fire ant, Solenopsis geminata, which feeds on the eggs of the banana weevil, Cosmopolites sordidus. Taking advantage of the fact that the cover crop and the banana use different photosynthetic pathways that produce different ratios of carbon isotopes in the plant, Tixier and his colleagues analysed the isotopic signature of the fire ants. The results from the plots with a cover crop suggest that the diet of the ants had changed to include prey that fed on the cover crop (a C4 plant), rather than the banana (a C3 plant). The scientists suspect that the main alternative prey was leafhoppers.


Leafhoppers produce honeydew that the ants collect, in return for which they protect the leafhoppers from natural enemies, such as parasitoids and predators. The carbohydrate-rich honeydew could be partly responsible for the higher numbers of S. geminata in the plots with a cover crop. Another way the cover crop might have helped the ants is by moderating variations in temperature and moisture at the soil surface, thus making their habitat more stable and hospitable.

Since the ants also prey on weevil eggs, Tixier wonders what would happen if after planting a cover crop that supports an increase in the number of fire ants, the cover crop were removed. Would the ants, deprived of one of their prey, go en masse for the weevil eggs? “We would like to test the idea to see whether managing the cover crop can improve control”, he says.

From the research station to farmers’ fields

The possibilities seem limitless, until they are tried out. But even if an agroecological innovation passes muster with scientists, it can still be rejected by farmers. This is why all innovations go through a validation phase with farmers after the research part is over. The process is managed by l'Institut technique tropical, the technical institute set up by CIRAD to be the link between research and its applications. “This phase is very important”, says Tixier. “Some plants that we thought would make great cover crops were initially disliked. Farmers have different criteria. Their feedback is important to find solutions to the problems they face and to orient future research. They keep us grounded.”

One of the difficulties with practices that harness ecological processes is that they cannot be delivered in a package or summarized in a few recommendations. To help farmers select which cover crop to plant, the French national institute for agricultural research INRA developed an online expert system based on the data CIRAD scientists gathered on the plant species they analysed. Users tell the system which ecosystem service (e.g. soil fertility, erosion control, weed control, nematode control) they are looking for, along with a description of the plot and other information. The system, which currently handles two crops only, banana and yam, produces a list of species with the most effective ones first.

The results are limited to the plants for which the scientists have data, but even if the suggested species are not available in a given country, the information is still useful. People can narrow down the field by looking for local plants with similar functional traits. Agroecological knowledge may not be prescriptive, but it certainly is adaptable.

SIMSERV, the expert system for the selection of cover (service) crops