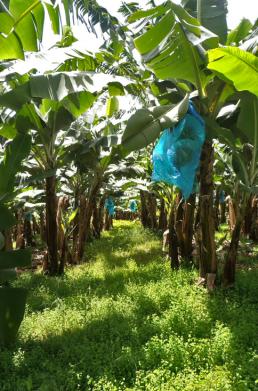 A cover crop (also called ground cover or cover plant), is a crop planted to manage soil erosion, soil fertility, weeds and/or pests, and thereby reduce the use of herbicides and pesticides. The practice consists in planting a species that does not negatively impact banana production and prevents the growth of weeds. These could be domesticated crops or local species. Bananas can also be planted on the mulch of a previous cover crop (such as Brachiaria decumbens or Crotalaria). The mulch will limit the growth of weeds and protect the young banana plants.

When establishing a new plot, the cover crop should tolerate light and not compete with banana plants.

Choice of a cover crop

A good cover crop for a banana plantation should possess many of the following characteristics: :

Benefits of a cover crop

Impact of a cover crop

In a field experiment conducted over two crop cycles, the impact of two grass covers, Cynodon dactylon and Brachiaria decumbens, was evaluated2 .  During the first cycle, both cover crops impeded the growth and development of the banana (a Cavendish cultivar). Compared to the control, the flowering date was delayed in both treatments and the number of fruits per bunch was reduced in the C. dactylon treatment. During the second cycle, as a consequence of the delayed flowering during the first cycle, banana development was also delayed. However, in both treatments, the presence of a cover crop had no influence on the size and weight of the banana plants at flowering, nor on final productivity. The authors interpreted the results as showing contrasted conditions of competition for nutrient during the two cycles: an important production of biomass and nutrient demand of the two cover crops during the first cycle, impacting banana growth and delaying flowering, and a lower biomass production of both covers crops shaded by the banana canopy and a contribution to the nutrient supply provided by the decomposition of the mowed residues, during the second cycle.