Loading...
News and analysis » A life dedicated to bananas

After working on bananas for more than 40 years, André Lassoudière continues his love affair with the world’s most popular fruit in a series of books written for the French-speaking market. 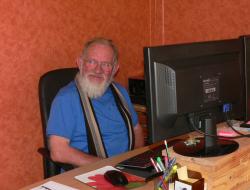 When André Lassoudière is not tending to his garden or reading poetry (his personal library contains more than 600 poetry books), he is working on a book on bananas from his home in western France. The former agronomist, who retired from CIRAD in 2008, is currently putting the finishing touch to a book on the history of the banana industry in the French West Indies, a topic he will take up again in a subsequent book on the French banana industry up to the coming into force of the Common Organization for Banana Markets in 1993. He also started work on a tribute to the banana for which he is gathering examples from literature, including, of course, poetry, and cultural as well as religious rituals.

When he is done, he will have written half a dozen books on bananas, including his most recent one, a survey of a century of technical innovations to produce dessert bananas for export. The book is based on a manuscript he inherited from his mentor Jean Champion, the French Norman Simmonds.

Lassoudière met him in Paris in 1966. At the time, he was an agronomy student on a scholarship from the French institute of overseas research on fruits (IFAC), where Champion is head of the banana programme. IFAC had been created in 1942 to rival the research stations set up by the British, Dutch and Belgians in Trinidad, Java, and Belgian Congo. One of IFAC’s missions was to help banana producers in Guinea, Côte d’Ivoire, Cameroun, Guadeloupe and Martinique compete with the exports from the Canary Islands and Central America. A network of research stations, partly financed by producers, started taking shape in the late 1940s. Among IFAC’s first recruits was Champion, who spent ten years at the Foulaya station in Guinea before returning to France in 1958 to head the banana programme, a position he occupied until his retirement 25 years later. “As a man and a scientist, he was rigorous, modest and generous”, says Lassoudière. “His advice and criticism were always spot on and infused with common sense”.

In 1967, Lassoudière is posted at the Azaguié station in Côte d’Ivoire. The living conditions at the station are basic and communications with the outside world are at best irregular. Inevitably, life mostly revolves around family and work. “On a day-to-day basis, we had a lot of freedom to organize our work”, recalls the retired agronomist. Long before Google is considered a trend setter for allowing its engineers to take 20% of their time working on projects not in their job description, IFAC agronomists can dedicate 30% of their time to fundamental studies with no immediate applications. Lassoudière uses the time to do a PhD.

After seven years at the Azaguié station, Lassoudière shifts his attention to the Nieky valley, where bananas are grown on peat soils. Bogs were considered unfarmable by local farmers, but not by Europeans, who turned them into polders. Banana production was introduced to the valley in the late 1930s by farmers who had left Guinea. “Farmers had to watch out for ants and termites, whose galleries can ruin a dyke by letting water in, but they otherwise achieved some of the highest yields in Africa, as much as 65 tonnes per hectare”, remembers Lassoudière. The main challenges are controlling soil acidity and the rate of decomposition of organic matter.

The African chapter ends after 12 years in Cameroon. All in all, Lassoudière spent 27 years on the continent, a time that more or less corresponds to what the calls the “cultural revolution”, the period during which the export industry changed its operating model to accommodate the Cavendish cultivars that were replacing the Gros Michel banana, whose large-scale cultivation had been made untenable by the spread of Fusarium wilt.

Unlike Gros Michel, which can yield 10 tonnes per hectare without much effort, Cavendish cultivars require a lot of care, not only to produce acceptable yields but also to withstand long journeys. The days of loading bunches directly onto ships are over. The fruits need to be put in crates or cardboard boxes, and with this come new post-harvest diseases that call for control measures. Meanwhile in the field, agronomists are busy coaxing ever higher yields from Cavendish cultivars. “The period from 1960 to 1990 is rich in technical innovations that result in significant increases in yields”, says Lassoudière.

The agronomist returning to France in 1994 is predictably different from the one who had left in 1967, but the research world to which he came back had also changed. One of the first things he noticed was that the generalists of his generation were being replaced by specialists. “One reason why managers don’t like generalists is that they are difficult to evaluate, since they don't write scientific articles in peer-reviewed journals”, he says. Lassoudière worries that it will create problems down the road. “When you don’t have anyone synthesizing knowledge across disciplines and looking back at what has been done, you run the risk of reinventing fire.” On the other hand, the task of making sense of an ever growing mountain of information can be, to say the least, overwhelming. We can only grateful that Lassoudière was not deterred by the challenge.

Published in 2007, Le bananier et sa culture is a technical treatise on how to grow dessert bananas.

Published in 2010, L’histoire du bananier retraces the history of the crop and of the export trade.

Published in 2012, Le bananier, un siècle d’innovations techniques summarizes a century’s worth of technical innovations that changed the way export bananas are produced.