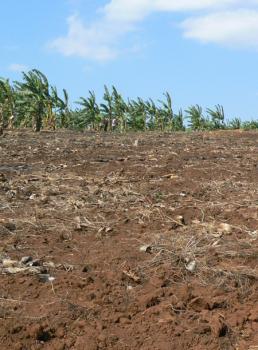 A fallow is a stage of crop rotation whereby the land is deliberately not used to grow a crop. In traditional agriculture it is used to allow the soil to recover its production potential and to reduce population levels of pests. In banana-based systems, it also offers the opportunity of implementing changes such as changing cultivar, modifying plant density or timing the harvest to a specific period.

A fallow period can reduce or eliminate populations of weevils and parasitic nematodes since these pests need a host plant, in this case the banana, for their development. In the case of weevils, however, the destruction of banana plants will trigger the migration of adult weevils. In a study conducted in Guadeloupe, the number of weevil captures was highest 10 to 20 weeks into the fallow and decreased to zero after 9 months1 . Since weevils are attracted to young banana plants, fallows should not be located next to a new plantation to avoid massive damage to the seedlings.

The objective of reducing pest populations is based on two practices : improved fallow and drainage ditches.

An improved fallow starts with the elimination of the banana plants, as well as of the suckers and rhizomes, by injecting them with herbicides or mechanically destroying them. The bunch and inflorescence must be cut before injecting the herbicide. The product must be injected at 1 or 1.5 m,  from where it will reach all parts of the plants through the sap. An herbicide injection is more effective than mechanical destruction. A study has shown that 9 to 12 months after replanting, between 10 and 15% of the plants were infected with nematodes when herbicide had been used  compared to 75 and 80% when the plants had been mechanically destroyed2 . It is also recommended to bury the crop residues 2 to 3 weeks after the treatment. All banana plants and hosts of banana pests must be eliminated during the fallow period. The fallow period must be at least one year to effectively eliminate banana pests. Mass trapping using pheromone traps will improve weevil control1 .

A fallow period with a cover crop can limit the growth of weeds, and depending on the species, control nematodes3 . A rotation with a cover crop, or a crop, is more effective against Radopholus similis than against Pratylenchus coffeae, which possesses a wider ecological niche. For example, the density of Radopholus similis was reduced to undetectable levels following two-year fallows during which Asystasia gangetica and Chromolaena odorata were planted as cover crops4 .

Ditches should be dug to protect fallows and sanitized plots from contamination. For example, run-off water from infested neighbouring plots can carry  Radopholus similis. 50-80 cm deep ditches will slow down the dispersal of pests and delay re-infestation by as much as 3 years. In the case of the banana weevil, Cosmopolites sordidus, a string of pheromone traps (1 trap every 20 m) can control its migration to plots in production.

After a fallow, or a crop rotation with a non-host species, the soil must be analysed to determine whether the plot is ready for replanting. To protect the sanitized plots, it is recommended to use planting material from clean plots or tissue-culture plantlets. The water used while weaning and hardening the plantlets must be filtered using a 5 ?m mesh. Since tissue-culture plantlets are more fragile than suckers at the time of plantation, it is recommended to have their roots analysed 2 months after plantation in order to estimate the percentage of infestation. The plants can be planted on the mulch of the fallow or on a tilled soil.

Combining a fallow period with replanting using tissue-culture plantlets can delay the use of nematicides for 1 to 2 years, the equivalent of 4 to 8 treatments4 .