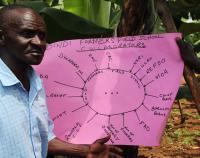 Source: Eldad Karamura
George Ouma had 20 banana plants when scientists from the Kenya Agricultural Research Institute (KARI) surveyed his farm in 2010, prior to the establishment of four Farmer Field Schools (FFSs) in the Ugunja district where he lives. Thanks to the FFS he joined, he not only increased the number of banana plants on his farm to more than 300, he also became an agent of change in his community by sharing healthy offshoots (some 5,000 so far) and advice on how to protect bananas from Xanthomonas wilt, a deadly bacterial disease better known as BXW. Last September, his achievements were publicly recognized when the FAO and the Kenya government named him the district’s best farmer.

As George told Bioversity International, the institute leading the McKnight Foundation-funded collaborative research effort that set up the FFS in Ugunja district, “this recognition gives us the incentive to continue. Running a good farm is hard work, but as we say on the farm: work like a donkey and dine like a king”.

Since it was first observed in Uganda in 2001, Xanthomonas wilt has spread rapidly through East Africa and eastern DR Congo, destroying entire fields when the conditions for the bacteria to enter the plant naturally (via insects) were favourable and no measures were taken to stop transmission to healthy plants. Scientists soon noticed strong similarities with other bacterial wilts of bananas encountered in Latin America and Asia. Based on the experience in these regions, a number of cultural practices to halt the spread of the disease were validated by subsequent research, such as removing the male inflorescence to stop transmission by insects and disinfecting cutting tools before using them on a different plant.

Although control measures have been widely promoted to farmers, they have not always been consistently implemented, or even adopted, by all the farmers who are at risk. Farmers have been especially resisting the recommendation to uproot the entire mat at the first sign of infection, probably because they are hoping that the mat will still produce bunches. Bioversity, in collaboration with Uganda’s National Agricultural Research Organisation and other partners, developed a ((Single diseased stem removal (SDSR)|single diseased stem removal)) alternative that can be equally effective, but only under the right circumstances. As Guy Blomme of Bioversity explains, “removing or cutting off at soil level the diseased plant needs to go hand in hand with the prevention of new infections. Single diseased plant removal will also work better when the initial disease incidence level is low and there is a concerted effort across affected farms. Farmers also need to remain vigilant as it may sometimes take more than a year before an infected sucker starts showing symptoms. In heavily infected fields, my advice would be to cut all the plants in all the mats and continuously remove any re-growth until all the underground tissues have decayed.”

These kinds of nuances tend to get dropped in awareness raising campaigns that rely on brochures, posters and the mass media. FFSs, on the other hand, empower farmers by exposing them to new ways of solving problems and by encouraging them to discuss solutions among themselves. Indeed, an analysis of different approaches used in Uganda to mobilise farmers showed that FFS were more effective in reducing the incidence of Xanthomonas wilt than the traditional approach of using extension services and mass media.

Back in Kenya, the percentage of farms with Xanthomonas wilt decreased by 80% to 95% and the area under banana cultivation increased by 44% to 53% in the benchmark sites where FFSs were set up. To sustain these gains, the farmers who attend a FFS, on average 30 farmers per school, agree to help set up another one. The first four farmer-led FFS were formed in 2012. “Every month, two graduated farmers spend a few hours sharing their knowledge with the farmers at the FFS they helped set up”, explains Margaret Onyango of KARI. “This way, by the end of the growing season, most graduated farmers will have helped train farmers but will have spent little of their time doing this, although sometimes an especially keen farmer will join the other two.”

As further evidence of the kind of enthusiasm the FFSs have generated, a group of graduated farmers has resolved to make the district free of Xanthomonas wilt. They are also showing foresight by planning to reach out to primary and secondary school students, no doubt to ensure that the disease would not creep back.