Uganda at a glance 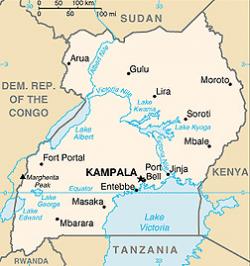 Uganda is among the top ten banana-producing countries, down from being in the top five in the early 2000s. According to FAOSTAT, production went from a high of 10.5 m tonnes in 2002 to a low of 4.3 m tonnes in 20163 . Over the same period, the surface area cultivated in bananas (the dessert and cooking types) supposedly declined from 1.8 m hectares to less than 1 m hectares.

More than 75% of all farmers grow bananas, the country's staple food. Depending on the region, Ugandans eat as much as 1 kg of bananas a day, mainly cooking bananas that were domesticated in the Great Lakes region. Botanical remains found in Uganda and dated at more than 2000 years before the Christian era suggest that the plant has been introduced earlier than previously thought 4 5 . The evidence, however, is not conclusive6 .

The importance of bananas has not gone unnoticed by visitors to Uganda.  In My African Journey, the book he wrote on his trip to East Africa in the early 1900s, Winston Churchill describes Kampala, the capital of Uganda, as "invisible" for being concealed by the "leaves of innumerable banana plantations”7 .

Since 2010, Uganda is divided into four administrative regions — Northern (yellow), Eastern (green), Central (red) and Western (blue) — that are further divided into 111 districts and one city (the capital city of Kampala)8 . 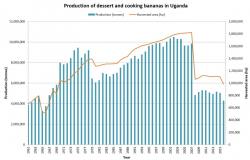 The most widely grown cultivars are cooking types belonging to the East African highland banana (EAHB) subgroup. The other bananas grown in the country include dessert bananas, such as 'Sukali Ndizi' and 'Bogoya', Plantain cultivars (locally called 'Gonja') for roasting and 'Kayinja' and 'Kisubi' for making beer.

EAHB cultivars are a staple to an estimated 10 million Ugandans, with 66% of the country’s urban population depending on it. They are largely grown in subsistence and smallholder systems at elevations of 1000 to 2000 m.

Annual yields are generally low (between 4.3 and 5.4 tonnes per hectare according to FAOSTAT10 ). This poor performance is usually attributed to pests and diseases but poor soil fertility is emerging as an important factor limiting productivity11 .

Weevils are considered the most economically important pest in plantations of East African highland bananas. Their impact, however, is probably somewhat overestimated since they are also blamed by farmers for damage caused by nematodes.

Black leaf streak disease was first reported in Uganda in 1989. It is absent above 1450 m and where the mean minimum temperatures fall below 15°C. Fusarium wilt is also present. It affects mainly dessert bananas and Kayinja. EAHB cultivars are generally considered to be resistant to Fusarium wilt, but the disease has been observed in western Uganda, albeit at altitudes over 1300 m.

Bunchy top has since emerged as the most serious theat facing Ugandan banana farmers.

Xanthomonas wilt, better known as BXW) was first reported in Uganda in 2001, in the Mukono district in the central part of the country12 , although a number of farmers report having seen the disease in 200013 . Early on, a system for encouraging and verifying reports of the disease was set up and the information fed into a national database14 .

The disease spread rapidly through Central Uganda and reached the major banana-producing areas in southwestern Uganda in 200515 . Being less prone to insect transmission probably contributed to the lower incidence of the disease observed among the EAHB cultivars that dominate the region. That and the fact that farmers were already routinely removing the male bud for other reasons when the outbreak started.

In 2003, the Ministry of Agriculture Animal Industry and Fisheries (MAAIF) and the National Agricultural Research Organization (NARO) embarked on an intensive programme to raise awareness of the problem and enable farmers to identify the symptoms of the disease and to implement control measures14 . A number of approaches were used to reach out to farmers: the extension system, media (local radio, television, newspapers and brochures) civic, cultural and local leaders, and a participatory development communication approach which consisted in organizing, at the local level, farmers, local leaders, extension staff, researchers and communication specialists16 17 18 . An analysis of the different approaches used to mobilise farmers suggests that farmer field schools have been more effective in reducing the incidence of Xanthomonas wilt than the traditional approach of using extension services and mass media19 .

On the other hand, an analysis of the 2006-2010 records from five plant clinics to which farmers bring samples of sick plants for diagnosis and advice, showed that Xanthomonas wilt was the most commonly diagnosed problem overall, despite the massive efforts expanded to raise awareness on the disease20 .

Multi-year experiments conducted in Uganda's Kifu forest were instrumental in showing that the bacteria do not systematically invade all the suckers on an infected mat. This atypical behaviour has led to the development of the single-disease stem removal technique.

The banana marketing system is very complex with long value chains of actors from farmers to consumers.

Poor infrastructure limits market development in the majority of rural areas. The main roads in the southwest and central regions are in relatively good condition, but as the yields in the plots closer to the main road have declined, new plots have been planted in more remote areas where the roads get flooded during the rainy season.

Cross-border trade has gone on for many decades but the volumes traded tend to be low. The main types traded are cooking (East African highland bananas and Plantains) and dessert bananas (Bogoya, Sukali Ndiizi) sold fresh, as well as transformed products such as beverages (juice, beer, wine, gin) and products made with banana fibre. The export of dessert bananas regionally and internationally is mainly constrained by the poor quality of the fruit due to poor handling, difficulties in controlling ripening and unattractive appearance on ripening.

An Economic Assessment of Banana Genetic Improvement and Innovation in the Lake Victoria Region of Uganda and Tanzania. IFPRI Research Report 155.