Loading...
News and analysis » Growing Cavendish in the presence of TR4

Fusarium wilt is dreaded for its capacity to lay waste to a banana planting. Even more so when the pathogenic strain is tropical race 4. As farmers told Ian Farquhar of Banana Link during a visit to China earlier this year, a typical pattern in Cavendish fields starts with 2 to 3 infected plants, progressing to a third of the crop being infected in the second production cycle, and ending with the destruction of the entire crop in the third one. The good news is when it doesn’t, since it could mean that something is holding back the fungus. That’s how a farmer in southern China discovered the biocontrol potential of Chinese leeks (Allium tuberosum) in 1997. His banana plants were heavily infected, except for the ones in a section of the field where, for three years, he had grown garlic chive.

To investigate the inhibitory effect of Chinese leeks, scientists at the Guangdong Academy of Agriculture Science set up trials near Dagang, south of Guangzhou, an area that used to be one of the main banana production areas before the arrival of TR4. Plants of ‘Baxi’, a local cultivar similar to Giant Cavendish, and of ‘Guangfen No. 1’ (Pisang awak, ABB) were transplanted in fields where Chinese leeks had been grown continuously for 3 years. The control fields had been cultivated with vegetables for one year, followed by sugarcane and then rice.

The Guangfen No. 1 plants, which were less susceptible to start with, fared better than the Cavendish ones. Compared to the control fields, disease incidence in the former Chinese leeks fields planted with Guangfen was 96.6% lower in the first year, 92.4% in the second and 88.4 % in the third, while yields were 85, 36 and 50% higher respectively. 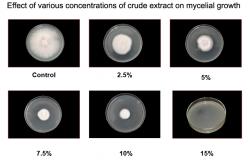 Source: Yi Gan Jun
The scientists also tested Chinese leek crude extracts for their antifungal activity. They found that mycelia growth was completely inhibited by a 15% extract, whereas a 10% extract reduced the number of spores by 90%. The results are published in the European Journal of Pathology.


In China, where many farmers lease agricultural land, growing awareness of the rotation system has led to a doubling of the price for renting a field on which Chinese leeks have been grown. A popular arrangement is to lease a field to a vegetable farmer to cultivate Chinese leeks for 3 years and then to a banana farmer for the next 3.

Results from Malaysia suggest that the effectiveness of intercropping with Chinese leeks in reducing disease incidence depends on the cultivar; being effective with 'Grande Naine' but not with 'Berangan Intan' (AAA) and 'Lemak Manis' (AA). Since no single practice is fully effective on its own, farmers are advised to combine management options.

What about resistant varieties?

When race 1 went global, the cultivation of susceptible varietal groups like Gros Michel and Silk declined drastically. Depending on their situation, farmers could switch to growing resistant varieties, but TR4 considerably narrowed down the options. In addition to attacking varieties in the Cavendish subgroup, TR4 strains also affect varieties susceptible to races 1 and 2.

The limited choice is not the only problem. Even when they are available, resistant varieties may not readily substitute for susceptible varieties. For instance, it took a long time for the export industry to warm up to Cavendish bananas. It held on to Gros Michel as long as it could, which is also what is happening with Cavendish, and not only in China. In South Africa, the response of the industry to the arrival of the subtropical variant of race 4 has been to establish new plantations in clean soil using tissue-culture plantlets. In Australia, where TR4 is present in the Northern Territory, evaluation trials identified a handful of resistant cultivars, but the Australian banana industry has not rallied around any of them. Instead, it relies on strict quarantine measures to keep the fungus out of the country’s main Cavendish production areas in Queensland.

In Taiwan, the strategy adopted by the Taiwan Banana Research Institute TBRI is to make the local Giant Cavendish clone Pei Chiao more resistant to TR4 through somaclonal variation: genetic or epigenetic changes that occasionally occur when plants are tissue cultured. TBRI uses its tissue-culture facility to mass produce plantlets that are screened in heavily infested fields (disease nurseries). The survivors are propagated and evaluated again, a process that is repeated over several cycles to check the stability of the resistance. Moreover, since TBRI distributes some 3 million plantlets to farmers every year, farmers in disease hot spots are also enlisted to look out for resistant variants. Suckers are collected and further tested to confirm their resistance level. The approach has the double advantage of circumventing the legendary low fertility of Cavendish bananas, which complicates breeding, and of producing clones that are more likely to be accepted by consumers than synthetic hybrids. 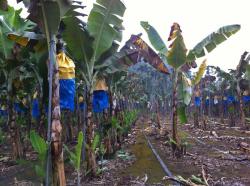 Source: TBRI
TBRI estimates that it has obtained 2 to 3 variants for every 10,000 plants screened. But while these clones – labelled GCTCV for Giant Cavendish tissue-culture variant – are less susceptible to TR4 than Pei Chiao, their overall agronomic performance is usually inferior in one way or another and more rounds of selection may be initiated to improve them. Since the start of its programme in 1984, TBRI has selected 15 clones, of which 4 have been registered for commercial production in Taiwan, including GCTCV-218.