Fusarium oxysporum f. sp. cubense (Foc) is one of more than 100 formae speciales (special forms) of the Fusarium oxysporum species complex of pathogenic as well as non-pathogenic morphologically similar filamentous fungi. The cubense special form comprises the pathogenic strains that cause Fusarium wilt in cultivated bananas, as well as strains that affect species in the Musaceae and Heliconeaceae families.1 However, it does not follow that the strains of F. oxysporum f. sp. cubense are necessarily related genetically.2 In 2019, a taxonomic revision introduced the names of 11 new Fusarium species, one of which, Fusarium odoratissimum, comprises  tropical race 4 (TR4).3 4

F. oxysporum has no known sexual stage. Variation in the fungus is thought to result from mutations.

The pathogenic strains are commonly classified into four races that are meant to reflect differences in the cultivars on which they cause disease. In reality, there are more variants of the fungus than the number of races suggests. Progress in understanding the pathogen's diversity was made possible with the development of a method to classify Fusarium oxysporum strains into vegetative compatibility groups (VCGs), based on the ability of their hyphae to fuse and form stable heterokaryons (cells containing two distinct nuclei).5 Each VCG has its own characteristics in terms of aggressiveness and the banana cultivars that it attacks most readily. The VCG associated with TR4 — VCG01213/16 — was ranked as the greatest threat to banana production because of its lethal impact, wide host range and persistence in the soil.6

In 1876, the author of the first report on the disease, J. Bancroft, speculated that it was caused by a fungus.7 Unaware of Bancroft's work, J.E. Higgins, an horticulturist at the Hawaii Agricultural Experiment Station, also proposed in 1904 that a fungus caused the disease.8

The plant pathologist Erwin F. Smith became the first person to isolate the pathogen from banana tissues he had received from Cuba.9 He reported his results at the first meeting of the American Phytopathological Society held in Boston in 1908.10 Smith recognized that the fungus was in the genus Fusarium and named it Fusarium cubense because of its Cuban source. The study confirming that the fungus was indeed the causal agent was published in 1919.11

Chlamydospores have a reputation for surviving for 30 years or more in soil, but it is more likely that the persistence observed in fields in which susceptible banana plants had not  been grown for decades is the result of Foc living as endophytes and multiplying in alternative hosts, such as weeds14 15 . It has also been sugested that former fields of 'Gros Michel' that have been converted to Cavendish are still infective for susceptible cultivars because the Foc strains live as endophytes in the Cavendish cultivars16 .

Australian scientists have established that 20 minutes in 65º C water is the minimum condition for killing race 4 hyphae, microconidia and macroconidia in banana plant tissue, whereas chlamydospores require autoclaving17 .

It's still not clear how the fungus kills the plant. One hypothesis is fungus releases toxins into the plant, killing its cells. Another is that the fungus tricks the plant into killing its cells by triggering the natural process of programmed cell death that eliminates unwanted, damaged or used cells. The decaying plant tissues would then be used by the fungus as a food source18 .

The hypothesis is being tested in a banana that has been genetically modified to prevent the fungus from co-opting the plant’s cell death pathways. Deprived of food, the fungus eventually stops growing and fails to colonize and infect the tissues of the transgenic plant19 . 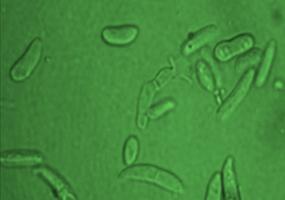 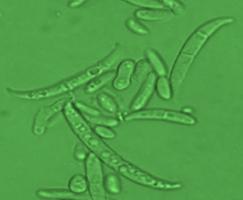 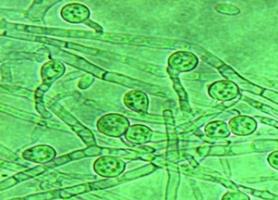 The pathogenic strains of Foc are classified into races based on the differential response of cultivars. Traditionally, four races are recognized, although certain situations suggest that more races may exist20 . Extensive inoculation studies are needed to clearly define the various pathotypes, but these are expensive and time-consuming. The results may also be equivocal because of variability in growing conditions and/or in planting material. The race concept has been criticized for being an imperfect measure of pathogenic diversity and for not reflecting genetic relationships, but is nonetheless considered useful to describe host reaction and new disease outbreaks.

Race 3 strains were reported to affect Heliconia species, and to a lesser extent Gros Michel and seedlings of Musa balbisiana21 . However, they have not been reported since20 .

Race 4 was originally coined to designate the strains that attack Cavendish cultivars. Prior to the 1990s, symptoms of Fusarium wilt on Cavendish cultivars had been observed in the subtropical growing areas of Australia, Canary Islands and South Africa22 , as well as in some tropical growing areas such as Jamaica and Guadeloupe. Circumstantial evidence suggested that the limited damage was due to predisposing factors: low temperatures in the subtropics and edaphic factors in the tropics23 . Originally classified as race 4, these pathogenic isolates were later reclassified as subtropical race 4 (STR4) to distinguish them from the isolates that cause Fusarium wilt in the tropics in the absence of predisposing factors, which then became known as tropical race 4 (TR4).

The 01213/16 VCG (see Vegetative compatibility below) associated with TR4 was first identified in isolates from Taiwan at the end of the 1980s16 . In India, symptoms of Fusarium wilt have also been observed on the Cavendish cultivar 'Grande Naine' in the absence of predisposing factors, except that the VCG of the isolate (VCG0124) is associated with race 1 strains24 .

TR4 also attacks cultivars susceptible to races 1 and 2, and additional cultivars such as Barangan (Lakatan subgroup, AAA genome group)25 and Pisang Mas. The wide host range of TR4 makes it difficult to diagnose outbreaks. For example, while a Cavendish with Fusarium wilt would immediately raise alarm, a Gros Michel infected with TR4 would not because the assumption would be it is infected with a race 1 strain.

Vegetative compatibility is used to classify — into vegetative compatibility groups (VCGs) — isolates that share the same form (allele) of the genes that control the formation of an heterokaryon (a cell with two distinct nuclei)5 . Since alleles at each locus (the location of the gene on the chromosome) must be identical in order for isolates to be vegetatively compatible, isolates within a VCG are assumed to be clonally derived. On the other hand, since a mutation in one of those genes would make closely related isolates vegetatively incompatible, isolates that share a common ancestor could occur in different VCGs.

Each VCG is given a four to five digit code. The first three numbers refer to the forma specialis to which the strain belongs, 012 in the case of the banana-specific f. sp. cubense. The last number represents the order in which the VCGs were identified (0120, 0121, 0122 etc.). The race 1 isolate used to designate the first VCG0120 came from Australia5 . Some 24 VCGs have since been characterized worlwide.