Improving the screening of banana plants for their resistance to Fusarium wilt would help scientists make better informed recommendations.

The recommendations coming out of field trials generally mirror the view that resistant cultivars are the only solution to Fusarium wilt (aka Panama disease). Any sign of the disease, regardless of the extent of the symptoms or the number of plants affected, can be cause for rejecting a cultivar. But is it enough to conclude that a cultivar is susceptible? After all, even Cavendish cultivars ? whose resistance to race 1 strains is undisputed1 ? will occasionally develop Fusarium wilt when plants in an infested field are exposed to an environmental stress. Conversely, an absence of symptoms is not necessarily a sign of resistance. It is possible that the plants escaped infection because the fungus was not evenly distributed in the soil. Or that its concentration was below the threshold required to trigger infection in that particular cultivar. The possibilities are so numerous that nobody raises an eyebrow when a cultivar reported as resistant in a site develops the disease when planted in a different one. 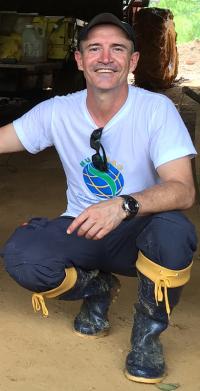 Miguel Dita, a plant pathologist at the Brazilian Agricultural Research Corporation Embrapa, has thought long and hard about how to make screening for resistance to Fusarium wilt more reliable. Where most scientists would suggest doing more field trials in different locations, he recommends screening each cultivar (or wild species when searching for sources of resistance to use in breeding) under both field and greenhouse conditions, as is the practice at Embrapa. As essential as field trials are, they are not without drawbacks.

Their main disadvantage, says Dita, is the lack of control over factors that can influence the results, like the soil composition, which is not necessarily uniform throughout the test site, and the concentration of the fungus in the soil, which is not known. “The assumption is that the fungus is evenly distributed because the susceptible control develops the disease. But if the susceptible control is planted in a block and the material being screened is in a block next to it, as is sometimes the case, the probability that all the plants are not exposed to the same thing is higher. ” Using an extremely susceptible cultivar as the only susceptible control is also problematic. A control that is easily taken down, even at low inoculum levels, can make the material being screened look resistant by comparison when in reality it could have, what Dita calls, quantitative resistance. Unlike ‘true’ resistance, quantitative resistance depends on the concentration of the pathogen to which the plants are exposed. If it is below what the cultivar can support, the disease will not develop. But exceed that threshold and it will get infected, as opposed to a truly resistant cultivar which will ward off the fungus regardless the intensity of the attack. That’s where greenhouse trials come in. “We want to know how the material we are screening reacts to known inoculum levels”, says Dita. “In greenhouse trials, we can expose them to very high levels.”

The purpose of pushing cultivars to their limits is not to discard the ones that have quantitative resistance, but to identify which ones can be grown productively in infested fields. Dita gives the example of the Silk-type hybrids BRS Tropical and BRS Princesa developed by Embrapa breeders. The hybrids have quantitative resistance, but they were still released to farmers to help them take advantage of the high demand for Silk bananas, whose cultivation in Brazil is severely constrained by their susceptibility to race 1 strains.

This type of resistance is also gaining traction in countries where tropical race 4 (TR4) ? the strain that causes Fusarium wilt in Cavendish types and a growing list of cultivars ? is widespread. With so few resistant cultivars identified so far, and none deemed suitable to take the place of Cavendish bananas, the only options currently available to growers producing for that market ? the Giant Cavendish somaclonal variants (GCTCVs) ? are examples of quantitative resistance. In the scientific literature GCTCVs are often described as being tolerant to TR4, but Dita disagrees with this use of the term which he says is incorrect (a cultivar is tolerant when it supports the same amount of the pathogen as another one, but produces a higher yield). He prefers saying that cultivars with quantitative resistance are moderately resistant.

Irrespective of what these cultivars should be called, the fact remains that there are consequences to growing them in infested fields, the main one being that they contribute to pathogen build up since they do not stop the fungus from reproducing. Dita adds that scientists recommending a cultivar that is not completely resistant should be prepared to answer farmers’ questions, such as: Can I plant it in my farm? How often do I need to replant? Will I make a profit? “These are tough questions whose answers depend on many factors. That’s where site-specific studies are especially useful.” Another consideration is the increased risk of spreading the pathogen, which is a particular concern when the pathogen in question is the highly virulent TR4 strain.

The recent spread of TR4 has made screening for resistance to Fusarium wilt topical again. Yet, not only do scientists use different protocols, the existing evaluation guidelines only provide instructions on how to conduct field trials and which data to collect (essentially the number of plants with internal and external symptoms). They do not even have a section on how to rank the screened cultivars, another issue that would benefit from shared and clear standards.

While Dita welcomes a discussion on how to improve screening for resistance to Fusarium wilt, he would also like to see more comprehensive data sets being collected and made available. Too often, he says, the only information available is disease incidence. Information on the pathogenic strain, or strains, is also often missing. More data ? on the incubation period, disease severity, the progression of the disease, and soil composition, among others ? would go a long way to help scientists understand the complex relationship between the fungus, its banana host and the environment.

1 In Central America, large monocultures of Cavendish cultivars have been grown in race 1-infested soils for more than 50 years without the fungus gaining the upper hand.