Loading...
Under the peel » Would the true peduncle please stand up?

I was in the process of assisting with the rewriting of a chapter for a new edition of a banana book and came across something to do with peduncles that I felt needed correcting: “the flower stalk or peduncle elongates and forces the inflorescence out through the top of the plant”.

I then proceeded to google the subject to see what was out there and came across a somewhat similar situation on the ProMusa website's Musapedia page on the morphology of the banana plant, which says that “the inflorescence… is supported by the floral stem, the banana plant’s true stem. The floral stem is produced by the terminal growing point on the rhizome. It grows through the pseudostem and emerges at the top”. It goes on further to say - “The peduncle is the stalk that supports the inflorescence and attaches it to the rhizome.”

In his 1963 book Le Bananier, Jean Champion also calls the true stem within the pseudostem tige florale (floral stem). He writes that the growth of the apical meristem on the underground stem (which he calls the bulb) marks the beginning of the elongation of the true stem, which will become aerial as it grows through the centre of the pseudostem.

I thought the best thing to do was go to the paddock and cut up a plant and take a few photos to demonstrate what actually elongates inside the pseudostem to push the bunch out of the top of the plant after the meristem has switched from vegetative to floral.

The sequence of photos below shows 1) a bunched ratoon plant of cv. ‘Williams’ before cutting off near ground level, 2) what remained after the leaf sheaths of dead leaves had been removed (10 green leaves left on plant), 3) the insertion point of leaf 7 – counting back from the youngest leaf (still 6 leaf sheaths to remove), and 4) the location of the last 6 insertion points (pointers are petiole pieces) with knife showing base of bract. There was one more node beyond this with a bract but no fruit, then came fruit nodes. 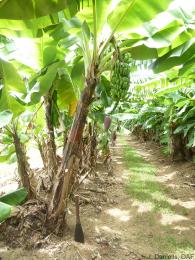 Fruiting plant of a Williams cultivar 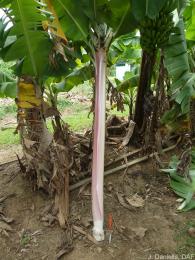 After removal of dead leaves and their leaf sheaths 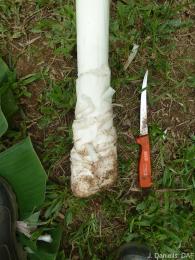 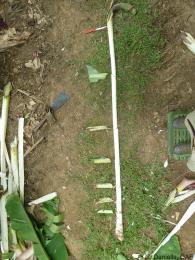 The photos show that the true stem inside the pseudostem supports leaves nearly all the way to the top. Indeed these leaves are the ones with the closest connection to the developing bunch. This is not new. Skutch had showed it to be the case in a 1927 paper. The evidence does not support calling a stem that has leaves attached to it a ‘floral stem’.

After showing the photos to David Turner, we came up with what we think is a better way to describe what is going on. The true stem starts with the rhizome (corm) and goes all the way to the meristem in the male bud (if present). The true stem is subdivided along its length into three parts: the underground rhizome; the aerial true stem to which is attached the bases of the leaves present within the pseudostem when transition to the floral phase takes place; and the peduncle to which is attached the inflorescence consisting of the sterile bracts, the female hands and the nodes of male flowers and the male bud. In the fourth photo, the peduncle would start at the point indicated by the knife, or perhaps at the node above it, and end at the meristem in the male bud.

The names we propose are already used for the three functionally different parts of the true stem: rhizome, aerial true stem and peduncle. The peduncle would have a female and a male section. The obvious omission is rachis, which for the banana is used to refer to the part between the male bud and the basal female hand, or the distal female hand. In botany, the term rachis is used somewhat flexibly for vegetative as well as reproductive parts. For example, Barker and Steward used it to refer to the midrib of a banana leaf. On the other hand, peduncle is used only for stems that support or have attached flowering parts, obviating the need for the term rachis.

We welcome comments and questions from readers.

About the authors: Jeff Daniells is a Principal Horticulturist with the Queensland Department of Agriculture and Fisheries at South Johnstone and David Turner is Associate Professor and Honorary Research Fellow at the School of Plant Biology, University of Western Australia in Perth.

Musapedia page on the morphology of the banana plant