Loading...
Under the peel » Soil health and suppressiveness: new directions in banana research?

The International Year of Soils generated much discussion and critical analyses around the use of this natural resource. Under the slogan “healthy soils for a healthy life” the FAO has been encouraging governments to undertake actions for improved management practices and conservation of soils.

What is soil health?

The concept of soil quality was first defined in the 1990s by the Soil Science Society of America Ad Hoc Committee on Soil Quality as ''the ability of a specific function of the soil, within the limits a natural or managed ecosystem to sustain the productivity of plants and animals and to maintain or improve water and air quality, health and human habitat". It encompasses not only internal factors related to crop yield and pest and disease incidence, but also the external impacts of soil and environmental issues such as global warming, soil and water purification and contamination. The term “soil health” builds upon “soil quality” by recognizing the soil as a living system and is defined as “the capacity of soil to function as a vital living system, within ecosystem and land-use boundaries, to sustain plant and animal productivity, maintain or enhance water and air quality, and promote plant and animal health”1 .

Banana experts have long recognized the importance of chemical and physical properties. However, the biological dimension of soil health is only recently being explored and harnessed in improved management for both banana productivity and sustainability. 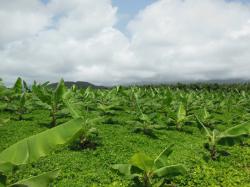 The conversion of natural ecosystems to intensive banana production systems can have negative effects on soil health, such as erosion, loss of organic matter and biodiversity, in addition to chemical, biological and physical imbalances. Indeed, soil degradation is a major factor limiting the productivity and sustainability of the banana sector. Banana growers worldwide, from conventional and organic export monocrops to mixed food gardens with bananas, suffer soil degradation processes through a complex of factors which vary by system and agroclimatic region. Salinization (due to inadequate irrigation practices and drainage), compaction, nutrient imbalances (due to the unavailability of organic fertilizers, soil depletion or over-fertilization, loss of biological activity), and incidence of soil-borne pathogens (loss of diversity of soil biota resulting in low disease suppressiveness) are key issues in banana plantations worldwide. While research must address these factors one by one, a major frontier for banana research is an integrated understanding of the soil as a living system (soil food web and microbiome) and its interaction with plants and their microbial communities (plant microbiome). How do the major functional groups in the soil and the plant interact with the carbon, nutrient and water cycles to generate healthier, more productive and more resilient banana production? How can the role of such functional groups as bioengineers, microbial transformers, predators, rhizosphere organisms, endophytes and even microbial organisms in the pseudostem be enhanced for more productive and sustainable banana production?

Managing soil as a living system

If soils are to be managed as living systems, the impact of agronomic and pest and pathogen management practices on soil and plant biological communities must be understood in depth to promote healthy soil functioning. Certain practices, such as cover crops, crop rotation, organic amendments, minimal tillage and integrated pest management are used to promote soil health through their effect on chemical, physical and biological soil properties, whereas some practices, such as weed-free crops and heavy fertilizer and pesticide use, are often undertaken without regard for their impact on soil health. Two key issues in banana soil health which highlight the importance of managing soils as a living system are (1) nutrient dynamics, in particular nitrogen, and (2) soil suppressiveness and its relation to Fusarium wilt.

While nitrogen is one of most abundant element in the planet, it is also a critical element for growth and development, due to the low availability of atmospheric N for plant use. In banana production systems, nitrogen is supplied in the form of mineral fertilizers, organic fertilizers or leguminous N-fixing trees and cover crops. Soluble nitrogen fertilization rates range from 100–600 kg N/ha/year, depending on the production system, and soil and climatic conditions2 . In Latin America and the Caribbean, the average rate of nitrogen in conventional export banana plantations is 300 kg N/ha/year. Depending on fertilizer source, application method and rate and weather conditions, only about half of the nitrogen applied is taken up by the crop and exported in the banana harvest; the rest is either recycled through soil organic matter or lost from the system. Nutrient use efficiency can be greatly improved through the use of the four recommended practices of fertilization: appropriate source, dose, timing and placement.

Management practices that reduce soluble nitrogen applications can also contribute significantly to reducing the impacts of fertilizer use on water quality and greenhouse gas emissions. Application of organic fertilizers and organic biomass stimulate microbial activity production. Soils with high microbial activity and organic matter can store more nitrogen in their microbial biomass, which is released slowly for crop uptake. Green manures are an underutilized resource that, in addition to improving soil nitrogen, promote a diverse microbial community. Use of nitrogen fixing green manures provides an alternative N source that slowly decomposes and is released into the soil system, thus reducing N losses. Green manures are a great benefit to organic producers who struggle to meet crop nitrogen demands with use of approved products. Other non-leguminous cover crops also take up extra soluble soil N and then relay it back to the system when they cut back and the residue decomposes. Biofertilizers based on microorganisms such as plant growth promoting bacteria, fungus and arbuscular mycorrhizas, can also stimulate root growth and nutrient uptake in banana. Organic producers rely heavily on maximizing nutrient uptake through improved root performance under low soluble soil nutrient concentrations. Management of the soil as a living system is central to the improvement of nitrogen use efficiency. How can actions of the soil functional groups be mobilized to optimize internal processes with appropriate external nutrient application in the different banana systems?

Emerging opportunities for reducing N loss are N inhibitors, including urease and nitrification inhibitors. Several commercial products are available that inhibit urea and other ammonium transformation, thus decreasing potential N2O emissions3 . These products have been widely used in other crops to increase N use efficiency but have yet to be applied in banana systems. These practices present economic cost-benefit trade-offs that require further experimentation and adaptation to different production systems.

The incidence of diseases caused by soil-borne pathogens interacts with various aspects of soil health. Management of Fusarium wilt, the major soil borne threat to the banana, is frequently associated with soil health oriented practices. In this regard the term “suppressiveness” or suppressive soils is frequently used. According to Baker and Cook4 , a suppressive soil is a soil in which “the pathogen does not establish or persist, establishes but causes little or no damage, or establishes and causes disease for a while but thereafter the disease is less important although the pathogen may persist in the soil”. On the contrary, a highly infective soil is called a “conducive soil”. Indeed, all natural soils posses the characteristic to suppress some plant pathogens, but improper or intensive management practices may transform a suppressive soil into a more conducive one. Chemical, physical and biological parameters are involved on soil suppressiveness. However, in recent years with the advent of tools, such as metagenomics, the composition of plant and soil microbiome are seen as key elements in shaping the plant-protective soil microenvironment of suppressive soils5 .

Suppressive soils have been studied for different soil-borne plant pathogens, including nematodes and fungus such as Gaeumannomyces graminis var. tritici, Rhizoctonia and Fusarium6 7 . Suppressive soils for Fusarium wilt in banana were first described by Stover8 and recent studies have identified suppressive soils in Australia9 and China10 . While the identification of suppressive soils is an important step, we still require a better understanding of the mechanisms involved and tools and practices to rehabilitate conducive soils and reproduce suppressive environments.

The improvement of soil health through, in part, the substitution of soluble N fertilizer with organic fertilizer sources could impact Fusarium wilt management. There is anecdotal evidence that the introduction of urea (a NH4 based fertilizer) coincided with an acceleration of the Fusarium wilt epidemic in Gros Michel bananas in Central America and in Silk bananas in Brazil. In fact, there is a positive correlation among soil acidity and Fusarium wilt intensity in banana. However, pH is influenced by many factors and having a less acidic soil is probably not a guarantee of a Fusarium wilt suppressive soil. Other practices that have been found to improve soil suppressiveness are cover cropping, organic fertilization and application of beneficial microorganisms such as Trichoderma.

Considering the importance of the two topics discussed, nitrogen and soil suppressiveness management, further studies, research consortiums and projects to generate high quality and sound results in these fields are required. Joint and multidisciplinary collaboration, including public-private partnership is imperative to lead research initiatives to bring knowledge and practices to banana farmers.

Written in collaboration with Marie Turmel
About the authors:
Marcia Barquero Quirós, PhD, is a Bioversity International scientific consultant concentrating on phytopathology and soil health. She formerly worked at Chiquita Brands International in Central America as a plant pathologist. She is based in León, Spain.

Marie Turmel, PhD, is a Bioversity International soil scientist and agroecologist based in Costa Rica. She is leading a FONTAGRO-funded project on soil health in smallholder export organic banana.