Multidisciplinary research has shed light on the origin of the oldest cultivated bananas. The result has major implications on the genetic improvement of these cultivars, as well as on the reconstruction of Southeast Asian prehistory.

The extraordinary large diversity of the starchy Plantains (AAB genome group) in Africa is well known. The number of Plantain cultivars in the rainforest zone of the continent is estimated at much more than one hundred, while the diversity in other banana subgroups rarely exceeds twenty or so members. With one exception: the perhaps fifty different cultivars of the starchy Maoli-Popo’ulu subgroup (also in the AAB genome group) in the Pacific Islands.

Such diversity cannot have been created by domestication of multiple ancestors, neither on the African continent nor on the Pacific islands, since no natural wild bananas are growing there. The only plausible alternative is that basic hybrids of these two subgroups have been introduced from the primary center of banana origin, which stretches from India to New Guinea and the Solomon Islands. Clonal propagation during centuries – or even millennia – would have caused multiple somatic mutations, thus generating this large diversity within both ‘new’ regions.

In a 2009 paper, I suggested that the basic hybrids of both Plantain and Maoli-Popo’ulu could have formed in a triangular zone containing the Philippines, Maluku (Eastern Indonesia) and the New Guinea area. Austronesian-speaking ancestors would have introduced the semi-cultivated Musa balbisiana (which they would have used for its fibre and medicinal properties, for example) into the zone about 3,500 years ago, thus bringing the B genome in contact with the first domesticated edible acuminata (AA) varieties, which led to the formation of AAB hybrids.

But instead of both subgroups currently being grown in Africa as well as in the Pacific Islands, their distribution is mutually exclusive: traditional cultivation of Maoli-Popo`ulu cultivars is not attested to the West of the triangular zone of origin and of Plantain cultivars to the East. It is as if a particular split occurred during the movements of Austronesian-speaking ancestors that caused the formation of AAB cultivars in two different areas of the same zone. 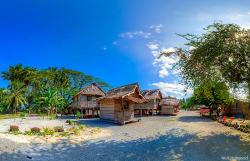 The Solomon Islands might be one of the places where Maoli-Popoulu bananas were domesticated.

This problem has now been elucidated in a multidisciplinary paper I co-authored with French and Australian colleagues. An exhaustive study of various parameters, such as Musa molecular markers and reconstructed movements of mainly Austronesian ancestors, led to the conclusion that the Plantains originated in the Philippines area, while the Maoli-Popo’ulus was generated in an area including the Bismarck and Solomon Islands.

The hypothesis is now that some Austronesian migrants introduced the Plantains into Indonesia, from where seafaring people carried them further to Africa across the Indian Ocean. Similarly, the ancestors of the Polynesians introduced the Maoli-Popo’ulu throughout the Pacific. The paper thus provides guidelines for multidisciplinary investigation focused on original people and banana hybrids involved in the distribution of these most important food crops.

The findings have important implications for the genetic improvement of these two subgroups. Both are indeed seriously menaced by the same diseases of which bunchy top and the black leaf streak fungus are the principal ones. Now that we have a precise idea of where the subgroups originated, we can fine-tune the search for their parents with the view of introducing them in breeding programmes. Improving largely sterile cultivars has been fraught with difficulties. Using more fertile closely-related bananas might produce better results.