Loading...
Under the peel » Ecuador, top exporter is not a banana republic

Bananas are the ultimate non-local food; safe to say, no farm product is more globalised. Likewise, no agricultural commodity is associated more closely with large corporations based in the United States. The banana business was largely the creation of the United Fruit Company, called The Octopus because of its near monopoly in the U.S. market and its control of supplies in Central America and other parts of the Caribbean Basin for many years after the firm's founding in 1899.

Chiquita Brands International (the current incarnation of United Fruit) has not had a lock on the production and marketing of bananas for decades. Nevertheless, corporate power and wrongdoing in Latin America are a recurring theme of books and articles about the tropical fruit industry—so much so that events and trends that do not fit with this theme are downplayed, if not ignored completely. Relatively little has been written, for instance, about the impact Colombians competing against United Fruit have had on banana development in their country. 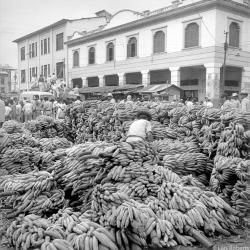 Gros Michel bananas on the Guayaquil waterfront in the 1950s. (Photo by Lois Roberts)

An even more striking example of neglect is Ecuador, which has been the world's leading exporter of bananas for sixty years and counting. Peter Chapman, for example, mentions Ecuador barely five times in a book titled Bananas that was published in 2007; only once does Chapman distinguish the country from places that arguably have been under United Fruit's thumb, by acknowledging in passing that an unnamed Ecuadorian firm competes in the global marketplace against Chiquita and a few other multinational fruit businesses. In a volume with a nearly identical title released a year after Chapman's book, Dan Koeppel goes so far as to mention the Ecuadorian brand (though never the name of the company itself) on two separate pages. No matter. One can read both books, which are supposed to be about the tropical fruit sector in its entirety, and still be unaware that the world's largest fruit exporter has never been a banana republic.

Historian Lois Roberts and I attempt to set the record straight in a new book titled Globalized Fruit, Local Entrepreneurs. As we document, multinational enterprises have had a presence in Ecuador—an important presence, dating back to the 1930s and continuing today. However, the country has not achieved and sustained export leadership at the expense of turning itself into a corporate satrapy; to the contrary, its commercial accomplishments have gone hand in hand with its insistence on steering its own course. Ecuador is the world’s leading supplier of bananas largely thanks to its entrepreneurs, and our book is largely about their contributions to agricultural trade and development.

Steering its own course

Unlike other exporting nations, Ecuador has a banana market worthy of the name, with dozens of exporters and other merchants purchasing and selling the harvests of hundreds of farms. Few of these farms are large enough to qualify as plantations. By the same token, no fruit buyer, either foreign or domestic, monopolizes the market. Under the pressure of competition, entrepreneurial innovation, such as sales of bananas in places where U.S. firms rarely if ever venture, is rewarded. Additionally, business skills are honed. Not least among these skills is a knack for mutually advantageous partnerships, of the sort Ecuadorian growers and exporters harness regularly.

Some of the most rewarding partnerships have been with agribusinesses headquartered in the United States, thereby demonstrating that the relationship between Ecuador and companies such as United Fruit has always been a mix of the cooperative and the adversarial. The country's growers rely on the multinationals for technology, which those firms have been willing to share since they deal regularly in bananas grown in Ecuador. Similarly, many Ecuadorian exporters got their start by associating with foreign businesses that were already established in the banana trade. Even now that those exporters have gained experience and have cracked a number of overseas markets on their own, partnerships continue—whenever the benefits are mutual, that is.

By no means has the Ecuadorian government been a passive observer of banana development. Hoping for an infusion of technology and capital, national leaders courted United Fruit as long ago as the early 1920s. Investment by the company did not actually begin until a decade or so later, by which time the political temper of Ecuador was much more populist and nationalistic. Along with other restrictions, limits were placed on the foreign ownership of agricultural land. Aimed squarely at The Octopus, these limits and restrictions allayed fears of political and economic subservience without being so burdensome that the firm would give up on Ecuador. Accordingly, the government was free to facilitate a boom in banana exports, in which United Fruit played a major role and which began once normal transoceanic commerce resumed after World War II. For example, macroeconomic stability was maintained, which encouraged private investment. Ecuador's government also saw to the construction of roads and bridges, which accelerated the tropical fruit sector's geographic expansion.

But while foreign firms and the national government have furnished critical support, Ecuador's banana industry has been led by competitive, home-grown entrepreneurs and, thanks primarily to them, challenges consistently have been met and overcome. Some of these challenges have been microbial, as when pathogenic depredations required a wholesale switch after the mid-1960s from the traditional variety of bananas to a new, disease-resistant variety. Others have had to do with disadvantageous public policies on the far side of the world, such as trade barriers the European Union adopted during the 1990s to limit fruit imports from Latin America. Ecuadorian entrepreneurs have found ways to deal with these difficulties, sometimes with the government's involvement or the assistance of multinationals and at other times on their own.

The Octopus bows out

Ecuador’s banana industry will never be free of pathogenic, political and other threats. However, the industry and its independent entrepreneurs are likely to survive and prosper. The Octopus, in contrast, no longer does so, at least as a separate business entity headquartered in the United States. In late 2014 and early 2015, Brazilian investors purchased Chiquita, lock, stock and bananas. So the company—an enduring symbol for many of U.S. multinationals’ dominance of the Western Hemisphere—will henceforth be a Latin American possession.

Admirers and critics of The Octopus, especially those who know little or nothing about Ecuador’s tropical fruit sector and its role in destroying United Fruit’s old monopoly, have every reason to be astonished.