Loading...
Under the peel » Dialogue on the future of plantain-based cropping systems 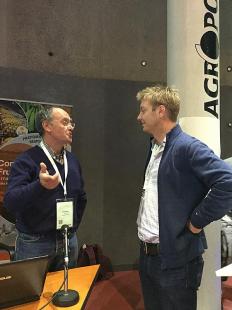 On the first day of the 2016 ISHS-ProMusa symposium,  Sylvain Dépigny and Thierry Lescot of CIRAD, treated the audience to a dialogue between a supporter of agroecological approaches to intensify Plantain-based cropping systems and a sympathetic skeptic. They kindly agreed to give ProMusa the permission to reproduce their text.

Agroecology: Is it key to the emergence of productive and sustainable plantain-based cropping systems?

Sylvain: Thierry, I want to discuss with you the idea that agroecology could be an opportunity to design and promote new Plantain-based cropping systems that are more productive and more sustainable. 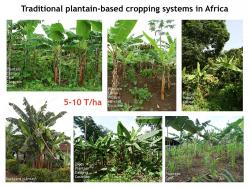 Thierry: OK. Let’s start with some of the results of your survey on plantain-based cropping systems in Cameroon. You identified up to fourteen annual and perennial crops associated with Plantain on the same field. Yet, measured yields only reached eight tons per hectare: you must admit these are very low yields compared to crop potential. How then can you continue to say that agroecology, which is based on the hypothesis that agrosystem diversity has positive effects on crops, is the best way to increase plantain production?

Sylvain: Let me clarify two points. First, we recorded significant heterogeneity between harvested bunches in the same field: while many bunches were light, some bunches weighed up to 30 kilos, which is close to variety potential. Second, Anicet Dassou, who studied the same field network, demonstrated that diversity type and structure had an effect on weevil populations. I think a better knowledge of this diversity could help us understand these observations. Furthermore, I believe that by simplifying and organizing agrosystem diversity we could help farmers increase their production. 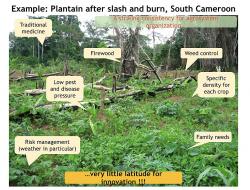 Thierry: Haven’t I already told you that these traditional agrosystems are very hard to modify? They were built to meet primary family needs (food, income for children school, medical care, etc…) based on a family’s production means (fields, manpower, etc…). They are on the whole really productive and resilient. I believe that in the socioeconomic context of food agriculture they do their job.

Sylvain: Yes, I agree with you, many papers support this idea. But, agronomic research is expected to produce knowledge that could contribute to designing more productive plantain-based cropping systems. We have only two possible ways forward: either improve productivity and duration of existing agrosystems or create new productive and Plantain-specialized agrosystems. You know as well as me the consequences of the second option. 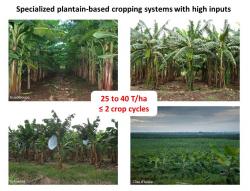 Thierry: Yes. It has not stopped countries from going down that path. In Latin America, high-input high-density Plantain production systems have been developed and many Africa countries are promoting these agrosystems. No later than yesterday, a Caribbean banana producer placed an order with Vitropic for 100,000 tissue-culture plantlets to plant more than 50 hectares of a Plantain monocrop! I could also mention the PREBAP, the C2D Plantain projects in Cameroon, the WAAP/CNS Plantain project in Côte d’Ivoire. These countries don’t want to develop food farming. They want to supply markets. They want to develop food industries and this requires high regular yields. In short, they want to start their own “green revolution”.

Thierry: Not really. I’m just trying to be pragmatic. Like you, I think these projects are not moving in the right direction. You, on the other hand, say that we should take advantage of diversity. But how many years till the yield gap is filled? How many more studies do you need to untangle the complexity of these agrosystems? Studying traditional agrosystems requires a lot of time and money for results that are uncertain and sometimes very hard to implement on farms. For example, some of the studies you have done with our research team show that ants regulate weevil populations. How can you possibly implement that on a farm?

Sylvain: But it’s been already done! In West Africa, farmers are already using ants to control fruit flies on mango trees. I get your point but I’m sure that the research we are doing, and the multi-disciplinary approaches we are developing, will allow us to domesticate this diversity and develop these new productive agrosystems. 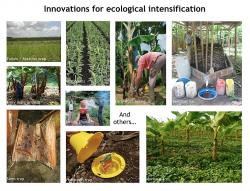 Thierry: Let’s be realistic! Farmers don’t have the time to wait. They are currently building monocrop Plantain cropping systems by copying agrosystems they know to be productive and cost-effective: the intensive dessert banana cropping systems.

Sylvain: That is the heart of the matter! Don’t you think that the scientific and technical knowledge agroecology research is currently producing could be an asset for these farmers? Don’t you think we could right now implement new Plantain-based cropping systems that integrate our first results? For example, improved varieties, healthy plantlets, fallow periods, cover crops, associated crops, biological techniques like natural traps for black weevil regulation, early leave pruning to reduce black Sigatoka, etc… In my opinion, our role is to avoid the emergence of intensive Plantain production systems by producing knowledge to support the development of low-input productive and sustainable plantain production systems using ecological intensification. By “productive” I mean systems that meet demand and support farmers who wish to develop modern and profitable farming. By “sustainable” I mean systems that farmers can implement.

Thierry: OK Sylvain! You’re young, which is a good thing because you have a lot of work to do! Little knowledge exists on Plantain growth, its varietal diversity and its associated crops, like whether they are hosts to nematodes, or have an impact on weevil populations. Let’s not forget the interactions between all these crops.

Sylvain: I think this is an amazing challenge. I’m sure that over the next few days we will find answers to these issues and meet potential partners who want to meet the challenge of the future of plantain production with us.