TR4 is associated with a new species name, while the causal agent of BXW (finally) changes species.

Before technological leaps in reading DNA made it easier to classify organisms on the basis of their relatedness, taxonomists used morphological characters to infer common descent. For morphologically monotonous plant pathogens, however, using overall similarities meant that pathogenic strains which had been given unique names, based on their ability to cause disease in specific plant hosts, would end up with the same species name.

The solution to satisfy the needs of plant pathologists, while upholding the species concept, was to add an informal rank below the one of species—such as special form (abbreviated f. sp. for forma specialis) for fungi and pathovar for bacteria—to distinguish the strains with different pathogenic abilities. Although the concept received wide acceptance, the possibility remained that strains united by pathogenicity might not be closely related, let alone share an immediate common ancestor. It was expected that DNA evidence would lead to taxonomic revisions.

One such revision has started chipping away at Fusarium oxysporum f. sp. cubense (Foc), the special form for the strains of the Fusarium oxysporum fungus that cause Fusarium wilt in banana. A study released last year introduced the names of 11 new Fusarium species one of which, Fusarium odoratissimum, includes none other than tropical race 4 (TR4).

The beginning of Foc… and of its end?

The term cubense has its origin in the name given in 1910 by E. F. Smith, the first plant pathologist to isolate the causal agent of Fusarium wilt from a banana plant. He named the fungus Fusarium cubense because the tissue sample was from Cuba. In 1935, H. W. Wollenweber and O. A. Reinking recognized it as a variant of Fusarium oxysporum and renamed it Fusarium oxysporum variety cubense, which eventually became Fusarium oxysporum f. sp. cubense following the reclassification  in 1940 of a number of Fusarium species as forms of Fusarium oxysporum.  The strains in the special form were later subdivided into races based on their pathogenicity to specific banana cultivars.

Starting in the 1990s, molecular analyses of Foc isolates in collections representing different parts of the world suggested that the ability to cause Fusarium wilt on banana had emerged independently multiple times. But one country in particular was underrepresented in collections despite being strategically located in the center of origin of wild and cultivated bananas that likely co-evolved with Foc. It’s Indonesia, which is where the collecting that led to the taxonomic revision was done over two field seasons as part of Nani Maryani’s PhD at Wageningen University in the Netherlands. More than 200 isolates were extracted from banana plants showing symptoms of Fusarium wilt in locations spanning the breadth of Indonesia, from the tip of Sumatra to Papua on the island of New Guinea. 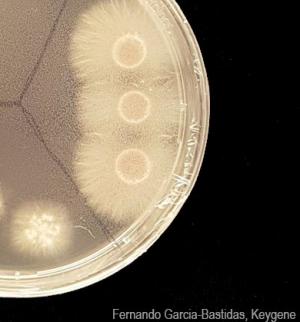 Culture of the fungus Fusarium odoratissimum. The new species is named after the strong odour produced by old cultures.

The partial sequences of three coding gene regions (tef1, rpb1 and rpb2) were used to analyse the evolutionary relationships among the isolates and to identify the 11 Fusarium species described in the Studies in Mycology paper. The holotype specimens upon which the description of each of the new species is based are preserved as metabolically inactive cultures at the Indonesian Culture Collection in Cibinong, Indonesia. The holotype for Fusarium odoratissimum, named after the strong odour produced by old cultures of the isolates, was collected on a 'Pisang Kepok' plant (AAB genome group, Saba subgroup) in East Kalimantan.

Maryani’s thesis director, Gert Kema, believes that her work is the beginning of the end of the cubense special form. He also says that “for TR4, we have unequivocally shown, based on morphological characters and molecular evidence from multilocus and whole genome sequencing, that all TR4 strains are essentially the same and different from all other strains that cause Fusarium wilt on banana.” But as he also said in a recent seminar, not all Fusarium odoratissimum isolates belong to TR4.

That TR4 is not the same entity as the species Fusarium odoratissimum is not in itself a problem, seeing as they represent two different taxonomic concepts. “A taxonomy is a human-made construct”, says David Studholme, an associate professor of Bioinformatics at the University of Exeter in the UK, and principal investigator on a draft genome sequence of TR4. “If you build a house, it is neither right nor wrong, but it could be more or less fit for purpose. In this case, what would be misleading is if TR4 and Fusarium odoratissimum were perceived as being the same entity.”

The term TR4 can also be a source of confusion. Before TR4 was race 4, originally coined to designate the first isolates extracted from Cavendish cultivars exhibiting symptoms of  Fusarium wilt, albeit mild ones. When more virulent isolates surfaced, they became known as tropical race 4 to distinguish them from the milder ones that only affected plants that had been predisposed to disease by environmental factors, like cold temperatures. These became known as subtropical race 4 (STR4).

But whereas the available evidence points to one strain being responsible for the global epidemic on Cavendish, TR4 is by definition an umbrella term for strains that cause disease in Cavendish cultivars (the non-TR4 isolates of Fusarium odoratissimum infect Cavendish, says Kema, with the difference that they are less agressive than TR4). It could almost be said that the TR4 strain which is spreading globally needs a unique name; except that it looks as if it can’t be a race name (a race is an informal rank above the level of strain) nor a species name.

“That strain could indeed benefit from having its own name”, agrees Studholme.  After mulling it over, he ventures: “Why not just call it TR4? After all, TR4 is not a race. The race is race 4. And when we talk about TR4 we already mean that specific strain. Problem solved… maybe?”

It took only one paper for the new Fusarium species to be considered validly published and registered in IndexFungorum. By contrast, the paper formalizing the species transfer from campestris to vasicola—which its lead author, David Studholme, hopes will be the final word—is the culmination of a process that goes back to 2007. As soon as DNA evidence suggested that Xanthomonas campestris pv. musacearum was more closely related to vasicola than to campestris, the (then invalid) Xanthomonas vasicola pv. musacearum name started cropping up in papers other than the ones building the case for adopting it. To make sure that the revision was done by the book, and included in the next list of new names, two members of the Taxonomy of Plant Pathogenic Bacteria Committee contributed to the paper putting an end to the confusion.

The bacteria was first isolated in 1968 from enset, a member of the Musaceae family that is cultivated for its starch in Ethiopia. Being a Gram-negative bacteria that produces typical yellow colonies on culture media, it was classified in the genus Xanthomonas (from the Greek xanthos for yellow and monas for entity). Since the isolate was only pathogenic to enset and banana, but not to the other 19 crops into which it was inoculated, the authors named it Xanthomonas musacearum and deposited it as an undescribed species with the National Collection of Plant Pathogenic Bacteria in the UK. In 1974, the same pathogen was also isolated from bananas.

Prior to the publication in 1980 of an Approved Lists of Bacterial Names that would only include the names of described species, plant pathologists proposed repurposing the term pathovar to maintain a connection with the names that would otherwise be left out. Xanthomonas musacearum became Xanthomonas campestris pv. musacearum (Xcm). It’s the name under which it was known when it was confirmed to be in Uganda in 2001 and spread all over the African Great Lakes region.

In addition to reviewing the previously published evidence, the authors of the taxonomic revision took advantage of the availability of complete genome sequences to calculate the Average Nucleotide Identity (ANI), a measure of nucleotide-level similarity between the coding regions of two genomes. The ANI between the Xcm type strain and the X. vasicola one was 98.4%, compared to 87.3% when it was matched with the X. campestris one. An ANI level above 95% between two bacterial genome sequences is the cut-off point to say that they belong to the same species.

“The ANI results clearly confirm that Xcm falls within the boundaries of X. vasicola”, says Studholme. “Now that we have shown that the new name Xanthomonas vasicola pv. musacearum is legitimate, and have validly published it, scientists can resume using it.”