The strain of Fusarium oxysporum f. sp. cubense (Foc) that became known as tropical race 4 (TR4)1 was ‘discovered’ in the 1990s when plantations of Cavendish bananas were established in peninsular Malaysia and the Indonesian island of Sumatra, only to be promptly destroyed by Fusarium wilt. For Ivan Buddenhagen, the unexpected outbreaks are part of a bigger puzzle on the origin of the 30 or so strains that are pathogenic to bananas, which he believes he has cracked. Did TR4 evolve as an endophyte in one of the wild ancestors of bananas?

In the talk he gave at last month’s Wageningen Banana Day, the Professor Emeritus at UC Davis went over the evidence for his hypothesis that TR4 is native to Malaysia and Sumatra and started off as an endophyte in Musa acuminata ssp. malaccensis, one of the wild ancestors of domesticated bananas.

He began his explanation with the observation that wild species of bananas rarely show symptoms of Fusarium wilt. This, he says, is because in the wild susceptibility to a local and potentially pathogenic strain would have been selected against, as infected plants would have died and left no descendants. 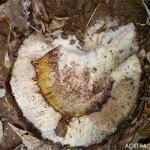 Buddenhagen’s hypothesis is that the same strains of Fusarium oxysporum2 that are pathogenic to domesticated bananas—the strains scientists call Foc—also exist as endophytes in the wild bananas they co-evolved with, as well as in the cultivars that were domesticated from these wild bananas. He calls these endophytes Fusarium oxysporum f. sp. musae (Fom). In other words, one banana’s Fom is another banana’s Foc. The retired scientist doesn't think that the pathogen-wild species co-evolution at the centre of his hypothesis happened wherever there were wild species of bananas. He suspects it was a relatively rare event.

Domesticated bananas first became sick when they were taken outside their native habitat and transplanted in soils that contained Fom strains they had not evolved with. Since suckers do not show symptoms of Fusarium wilt, using asymptomatic but infected suckers as planting material further contributed to the spread of the disease, eventually taking it beyond Asia.

It would also explain why wild bananas can develop Fusarium wilt when they are removed from their native forest. The retired scientist gave as example the wild species that the United Fruit Company (today’s Chiquita) collected in Asia and planted in their field collection in Honduras at the height of the Fusarium wilt epidemic on Gros Michel. Many of them developed the disease. Buddenhagen believes it is because they had not coevolved with the strains that had been introduced to that location. In Sumatra, he also exposed plants of a local wild species and two non-local ones to TR4-infested soil. The local one (Musa acuminata ssp. malaccensis) remained healthy, whereas the two non-local ones (Musa acuminata ssp. banksii and Musa sumatrana) became severely diseased. These results also suggest that TR4 is not present in areas where these two species are healthy.

Asked whether he thought some of the endophytes commonly found in bananas could be pathogenic if they encountered the ‘right’ banana, Buddenhagen replied that he thinks “all the pathogenic strains that had to be found have been found”. If he is right, we don’t have to worry about ‘new’ pathogenic strains popping up, only about not spreading the known ones, such as TR4.

In his talk, Buddenhagen mentioned some of the routes through which he thinks TR4 was taken to Taiwan, China, the Philippines and Australia. For example, he suspects that a collecting mission to Sumatra introduced the fungus to Taiwan. The evidence he dug up is also discussed in the paper he presented at the 2007 ISHS-ProMusa symposium in South Africa.  He doesn’t know how TR4 spread to Africa and the Middle East, but urged scientists to solve this mystery.

1 TR4 refers to the isolates that match the vegetative compatibility complex 01213.
2 Fusarium oxysporum is a common root endophyte that can survive as a saprophyte in soil.
Related content

Heartbleed and the banana