The nomenclature system specific to edible bananas is the only alternative to Latin binomials, but it needs tweaking and advocates to promote it.

Linnaeus's banana legacy explored how the father of modern taxonomy, Carl Linnaeus, inadvertently muddled the taxonomy of bananas when he described two edible bananas and named them Musa paradisiaca and Musa sapientum.

By virtue of being the first Linnean name given to a banana, Musa paradisiaca is still an accepted name, except that it is now written Musa x paradisiaca. The x indicates that the banana Linnaeus described—eventually determined to be a Plantain cultivar—is a hybrid of the wild species Musa acuminata and Musa balbisiana. And since the model for Musa sapientum (most likely a Silk cultivar) was also a hybrid, it is now considered to be a synonym of Musa x paradisiaca, along with all the other Latin binomials believed to be referring to similar hybrids. A Cavendish cultivar and the true Musa acuminata

The problem with Latin binomials is not whether any given name is accepted or not. Using an accepted name like Musa x paradisiaca reveals nothing about the cultivars in question, while assimilating a Cavendish cultivar to Musa acuminata makes a mockery of the Latin binomial system developed by Linneaus.

A nomenclature system specific to bananas domesticated for their edibility

One character that Latin binomials do not capture, but that the informal nomenclature system developed by Norman Simmonds and Kenneth Shepherd  to classify banana cultivars does, is ploidy. Unlike seedy bananas, which are always diploid (that is, they have two sets of chromosomes), banana cultivars can have anything from two, three or four sets.  The other type of information this sytem also conveys is the relative contribution of each ancestral species in the genetic make-up of the cultivar (see Genome group scoring system)

Another advantage of the genome-based nomenclature system over Latin binomials is that it can admit new results—like finding the genetic signature of another species in a cultivar—without nomenclature upheaval. For example, when some diploid cultivars were revealed to be hybrids of Musa acuminata and Musa schizocarpa, the genome group AS was created.

On the other hand, scientists have had difficulties in assigning cultivars to a genome group using the scoring method, in part because of the effect of the environment on the expression of morphological characters, but mainly because the complexity of the cultivar genomes is not easily reduced to a string of letters. These difficulties should disappear as genomic techniques supersede visual scoring to determine genome groups.

Genomic techniques will also help assign cultivars to a subgroup, the level below the group that Simmonds created to distinguish sets of closely related cultivars, like the Plantain subgroup. These arise because even though cultivars are sterile, except for some residual fertility that allows them to be used in breeding schemes, mutations that affect their morphological characters regularly occur. Farmers create new cultivars when they propagate mutant plants that exhibit desirable traits. 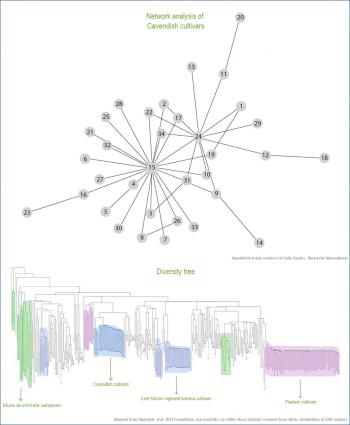 Network analysis constructed from genebank accessions representing Cavendish cultivars. The lines link accessions that are genetically closest to each other. Number 15 ('Williams') and 24 ('Grande Naine') are popular sources of mutants which when they are propagated by farmers become cultivars. The diversity tree, which includes both wild and cultivated bananas, shows that cultivar diversity in any given subgroup is underpinned by low genetic diversity.
In his influential book Bananas, Simmonds suggested the following ways to refer to a banana cultivar.

The nomenclature system is appreciated for being useful and informative, but genome groups have been criticized for lacking biological or economic significance. For example, the AAA genome group comprises the East African Highland bananas subgroup, whose cultivars are usually cooked and are important for food security in East Africa, as well as the Cavendish subgroup, whose cultivars are typically eaten raw and make up the bulk of the international export trade.

The same authors also note that genome groups lack "hierarchical significance" since subgroups within the same genome group do not necessarily cluster together in molecular studies. This is because their genetic make-up tends to be the result of a complex domestication history mediated by the choices farmers made. This would be a problem for wild plants, whose classification system is hierarchical to reveal evolutionary relationships, but not for cultivated plants  since they are not the product of natural selection.

To reflect this difference, the rules for naming cultivated plants have not been governed by those for wild plants since 1953, the year the first edition of the International Code of Nomenclature for Cultivated Plants (ICNCP) came out. Unlike the botanical code that governs the naming of species, the ICNCP does not mandate Latin binomials, but it doesn't proscribe them either.

The main categories in the ICNCP are the Cultivar and the Group. In his book Bananas, Simmonds says that he adopted the word group from the ICNCP, except that according to code the name of a group must be one word or several words. It cannot be a formula. Moreover, because the genome groups lump together different types of bananas, it does not fit the ICNCP’s definition of a group: "the formal category which may comprise cultivars, individual plants or combinations thereof on the basis of defined character-based similarity".  The subgroup, on the other hand, fits the definition of a group. Elevating the subgroup to the level of group would make the nomenclature system compliant with the ICNCP. The cultivars' genome constitution would still need to be provided because it is an important piece of information for scientists. It just cannot be a formal category.

Modernizing how edible bananas are named also provides an opportunity for discouraging certain conventions that blur the lines between species of banana and bananas domesticated for their edibility. For example, one unintended consequence of having genome groups for banana cultivars has been that some scientists started applying the annotation system to wild species. For example, when referring to Musa acuminata some scientists give it a genome group, AAw, which has the knock-on effect of requiring the genome group of edible diploids related to acuminata to be written AAcv. The practice is as confusing as it is unnecessary since wild species don’t need a genome group. They are their own genome, something some authors seem to have forgotten1 .

Another way the line between the two nomenclature systems is blurred is when scientists write Musa spp. for the crop even though cultivars are not species. One of the reasons could be that the entrenched practice of giving Latin binomials to crops reinforces the notion that they are species even when the name doesn’t point to any species. Take Zea mays subsp. mays, the scientific name for maize, usually shortened to Zea mays. It does not describe the wild ancestor of maize, or any other wild plant for that matter. It’s just another way of saying maize or what some scientists call a mock-scientific name.

Efforts to classify cultivars into genome groups and subgroups have not progressed much since Simmonds's extensive treatment of cultivars in Bananas. At the time he estimated that half of the banana cultivars were well known. Simmonds was most likely underestimating the total number of cultivars, a task made difficult by the plethora of names given to cultivars by different people. The checklist of cultivar names on the ProMusa website was started to help clarify the situation. Its goal is to arrive at an internally coherent list of names indicating which ones are synonyms (different names that refer to the same cultivar) and homonyms (similar names that refer to different cultivars).

However, nearly 40% of the entries in the checklist are not assigned to a subgroup. Recognizing the limitations of the current system, a group of scientists got together to make the subgroup the main category for classifying bananas, by renaming it cultivar group, and have the new system formally recognized. "Our hope", says Christophe Jenny, a genetic resources scientist at Cirad, "is that it will stimulate renewed activity in describing and classifying edible bananas."  Inge Van den Bergh, a scientist specializing in the evaluation of banana cultivars at Bioversity International, also points out that "since cultivar diversity is a poor proxy for genetic diversity, the knowledge gained from such an effort should help design more genetically diverse production systems. It should also help rationalize banana collections."

The hidden side of banana diversity