Papua New Guinea is known for the diversity of its edible bananas, which is at its most exuberant among the diploid cultivars derived from the local subspecies of Musa acuminata. The diploid part means that, like their wild relative, these cultivars have two copies of each gene-bearing chromosome, instead of three like the triploid bananas that dominate the export trade and global production. 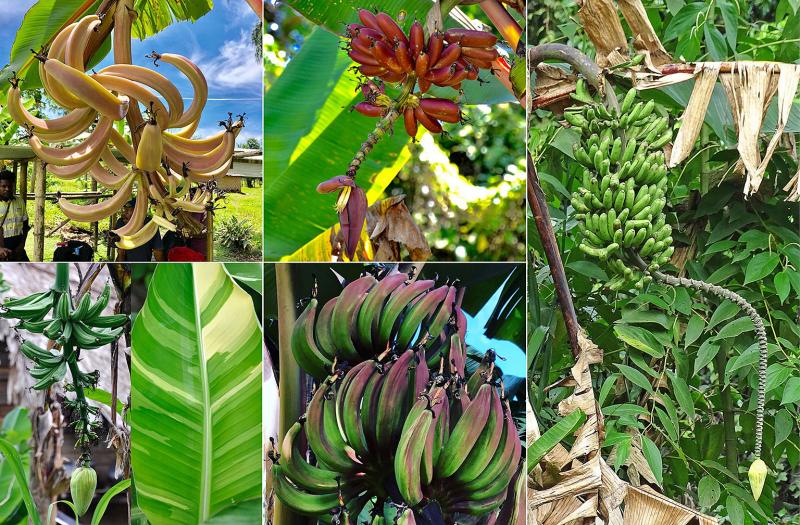 PNG is one of the few places where diploid cultivars are still relatively abundant in farmers’ fields. Although one cannot help but be taken with these extravagant bananas, the revelation of a pre-pandemic visit to PNG was a more mundane-looking banana, but an even more improbable one.

The plant was spotted in late 2019 in Konguan, a village in the Bogia District of Madang Province, at the beginning of a week-long stay organised as part of a RTB-funded project exploring the on-farm genetic diversity of roots, tubers and bananas. Staff from PNG’s National Agriculture Research Institute (NARI), the Departments of Primary Industries of Madang and Bogia, the Alliance of Bioversity-CIAT and the French International Research Centre for Agricultural Development CIRAD had arrived to explain to the villagers that they would be visiting many of them over the coming days to survey the diversity of bananas they keep on their farm. No suckers would be collected but, occasionally, a small leaf sample would be snipped for genetic analyses. The scientists also wanted to take advantage of the villagers’ presence at the introduction meeting to draw up a list of the cultivar names they were likely to encounter.

Rodney Aku from NARI calling on villagers to name the bananas in their food garden. (Photo credit: Julie Sardos)

While the meeting was being set up, Gabriel Sachter-Smith, a banana taxonomy expert consulting for the Alliance, had a quick scout around for bananas. He came back with a grin on his face triggered by an encounter with an unfamiliar banana. When he later showed it to Janet Paofa, the curator of the NARI collection in Laloki, she concurred with him. “I had never come across such a banana before”, recalls Paofa. “The first thing that came to my mind was that we needed to introduce it to the national collection.”

According to Sachter-Smith, the tell-tale signs that this cultivar, known as Menengan, is not a run-of-the-mill banana are the glossy and overlapping bracts of the male bud, and their unusual dark/pale yellow pairing of colours. 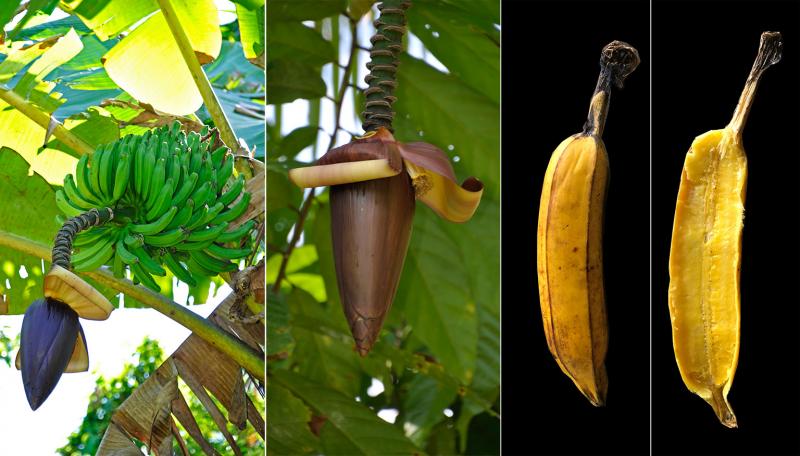 Polished and overlapping bracts are among the defining traits of Musa species belonging to a section (a division below the genus) which used to be called Australimusa but has since been merged with another section and renamed Callimusa. It is the section that has the wild ancestor(s) of a unique type of Pacific banana, the Fe’i banana. But this is not a Fe’i cultivar, says Sachter-Smith.

“It’s very likely a rare intersectional hybrid and possibly a tetraploid (four sets of chromosomes). One parent was probably a fairly normal edible banana derived from Musa acuminata, which belongs to the Musa section. My guess for the other parent is a Callimusa species, maybe Musa maclayi, Musa bukensis or Musa peekelii. But even finding out the identity of the parents won’t entirely explain how this cultivar came into being. Callimusa species have 10 pairs of chromosomes, whereas the edible parent would have had 11. This hybrid shouldn’t exist. Yet it does.”

The team had a chance to taste it during the on-farm survey when a farmer kindly offered some ripe fruits. The yellow flesh and its lightly sweet taste are reminiscent of Fe’i bananas, says Sachter-Smith. The colour also suggests relatively high levels of provitamin A carotenoids. The fruit is eaten raw or roasted. The plant might even be tolerant to drought, according to one of the interviewed farmers.

Menengan is one of the 51 cultivar names documented during the visit to Konguan. A leaf sample was collected every time a new cultivar name was mentioned, although some names have more than one sample to check whether the same name in different fields refers to the same cultivar.

Madang, we have a problem

Past collecting missions to PNG, of which there have been several since the 1950s, had singled out Madang Province as a hotspot of banana diversity, along with East New Britain Province in the Bismarck Archipelago. More recently, this had led to both provinces being selected for surveys of their on-farm diversity in December 2017 and February 2018, respectively. The study, conducted by NARI and funded by RTB, recorded 158 cultivars in Madang and 80 in East New Britain. 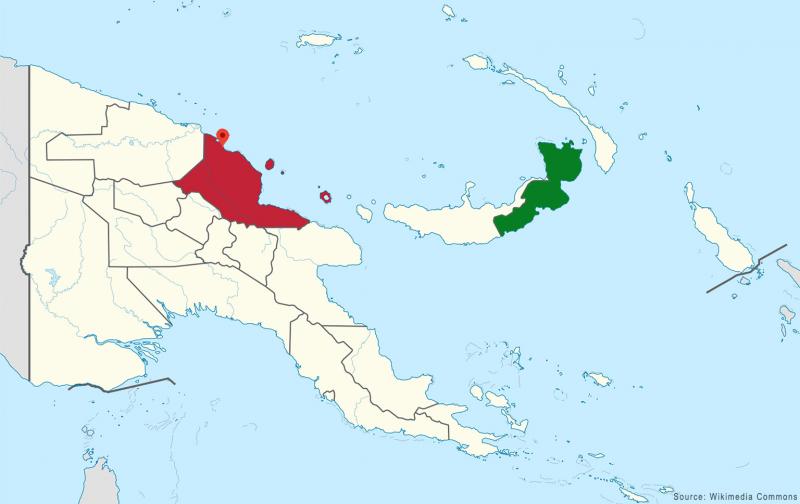 The provinces of Madang (in red) and East New Britain (in green). The marker points to Konguan.

Madang’s high on-farm diversity made it an obvious choice when looking for a village in which to take a closer look at the bananas’ genetic diversity when the on-farm project was launched in 2019. Another reason is the threat posed by the presence, in certain areas of Madang, of a banana wilt associated phytoplasma (BWAP) similar to the phytoplasma causing lethal yellowing in coconut. The disease, which mostly affects the Kalapua and Daru cooking bananas, is also the reason why Menengan has still not been backed up in the national collection since collecting suckers would run the risk of introducing the pathogen to a disease-free area. But this may soon be remedied by using tissue culture.

Once in the NARI collection, Menengan will join the hundreds of accessions from PNG that over the years have been introduced to the Alliance’s global banana genebank hosted at KU Leuven in Belgium, including material from a recent collecting mission in West New Britain.

“PNG has not finished revealing its amazing banana diversity”, marvels team leader and Alliance scientist Julie Sardos. “It’s not just that plants like Menengan exist, but that farmers grow them. Menengan is one of the handful of presumed and confirmed intersectional hybrids we’ve come across in the Pacific, a couple of which also have Musa balbisiana in their genetic make-up. That there is a market for these oddities should inspire breeders to be more adventurous in their choice of parents.”

The continued presence of diploid bananas, despite requiring more frequent replanting than the triploid ones, is also puzzling. “It has defied expectations” adds Sardos, “but the situation can change rapidly. It’s hard to tell in the absence of long-term data, but anecdotal evidence suggests that diploids have been losing ground to triploids. A better understanding of on-farm dynamics would help devise strategies that support both the conservation of this unique diversity (breeders also like diploids because they tend to be more fertile than triploids) and the aspirations of farmers.” 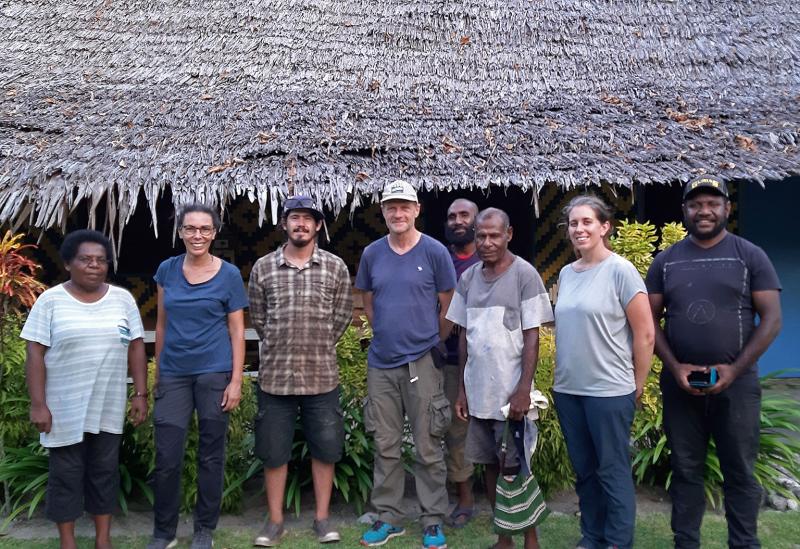