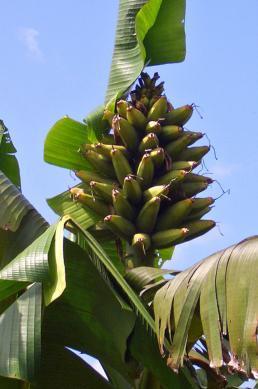 Fei (Fe'i or Fehi) is the name given to a group of bananas easily recognized by their erect bunch. They have been domesticated independently from the bananas related to Musa acuminata and Musa balbisiana. Their origin is not as well understood beyond the fact that the ancestors belong to the former Australimusa section, which has since been merged with the Callimusa section1 . Musa maclayi has been proposed as an ancestor.

Fei bananas are believed to originate in the New Guinea area but have been found from the Molluccas, in Indonesia, to Tahiti in the east. They used to be an important staple food in Tahiti2 , but they have become increasingly rare following the introduction of other types of bananas and a shift to eating imported food. Interest in these bananas, however, has grown after studies showed that they have high levels of carotenoids, which are converted in the body to vitamin A. Agronomically, however, they tend to be susceptible to pests and diseases, do not produce many suckers and take a long time to produce a bunch.

In the Federated States of Micronesia, campaigns promoting the cultivation of Karat bananas has resulted in an increase of sales of these Fei bananas in the markets of Kolonia, the capital of Pohnpei State3 . The fruit have a higher starch content than other banana cultivars and are usually consumed roasted or boiled.

Fe’i bananas are characterized by an erect bunch, the red-purple to purple colour of their sap and the colour of the fruit, which ranges from yellow to orange depending on the cultivar. The edge of the petiole base is distinctively frilly. The leaf blade also tends to have strong cross-corrugations. The purple sap of Utin Iap, a Fei banana from the Micronesian island of Pohnpei. Orange-fleshed fruits tend to have high levels of provitamin A carotenoids. The petiole base of Fei bananas is distinctlly frilly.

The leaves of Fei bananas usually have strong cross-corrugations.

Photos of Fei bananas in the Musarama image bank
In pictures on The bananas of Pohnpei
Musapedia pages on Fei cultivars: Asupina, Karat