Sigatoka leaf spot (popularly known as Yellow Sigatoka) is a fungal disease caused by Pseudocercospora musicola (formerly Mycosphaerella musicola1 ). It was the first leaf spot disease to have a global impact on bananas but has since been  largely displaced by black leaf streak  in many banana production areas. However, it can still cause considerable losses at higher altitudes and cooler temperatures, and is also typically a greater problem during rainy seasons in subtropical banana growing regions2 . The disease reduces the leaf's photosynthetic capacity, which affects bunch size. It also shortens the fruit's green life, the time between harvest and ripening.

Like black leaf streak, Sigatoka leaf spot is globally distributed. It was first recorded on the Indonesian Island of Java by Zimmermann in 1902. Later, the disease was reported in the Sigatoka District on the island of Viti Levu, Fiji, in 1912. During the following 40 years, serious epidemics were reported, with distribution across growing regions of Asia, Africa, Central and South America and the Caribbean3 .  In Brazil, where the pathogen occurs in all growing regions, it still imposes substantial costs to growers in the larger producing regions4 .  Losses of up to 50% of production have been reported5 . 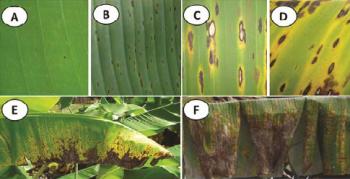 The first visible symptom is a slight discoloration between the leaf's secondary veins (A). Over time, these points develop into pale yellow streaks, brown streaks and elliptic necrotic spots arranged parallel to the secondary veins. The depressed grey center is surrounded by a yellow halo.  As the disease progresses, the lesions coalesce and cover a large area of the leaf (F)6 4 .

In regions where the pathogen is present, the inoculum can be maintained at a low level using cultural practices such as drainage, weeding, proper fertilization, planting density and deleafing to reduce inoculum. Sigatoka leaf spot can be effectively controlled by combining deleafing and chemical treatment.