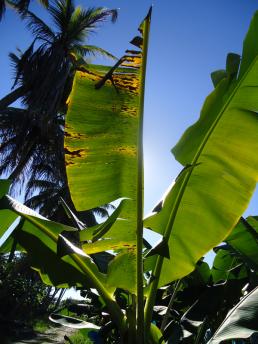 Deleafing is the sanitary removal of leaves, or parts of them, that are infected with black leaf streak (BLSD). Banana leaves being the only source of inoculum of BLSD, and the capacity to produce ascospores being higher in living leaves than in cut leaves laying on the soil, less ascospores will be released. Deleafing increases the efficiency of fungicide applications and has been shown to reduce  premature ripening1 . However, it involves a trade-off between the removal of infected leaves and the preservation of a minimum leaf surface area to ensure an adequate development of the bunch until harvest. Studies have shown that the weight of the bunch is not appreciably affected when the number of leaves between flowering and harvest is between 5 and 72 3 .

Sanitary deleafing consists in the surgical removal of part of a leaf. It generally follows the order of apparition of the symptoms: the tip, the left blade and the right blade. The removed leaves are generally at stages 5 or 6 of the disease (also stage 4 if the density of spots is high), these stages being the most visible. A weekly deleafing is recommended.  It's also recommended to deleaf before the application of fungicides to avoid the selection of resistant strains. All the plants must be examined, even the suckers.

The trade-off between removing the entire leaf and removing only the infected part depends on the severity of the disease and the rate of deleafing:

This method consists in the weekly removal of the leaf tip (about 20 cm) of one of the 5 oldest leaves before the appearance of necroses4 5 . It is complementary to sanitary deleafing and is particularly useful in areas where the conditions are favourable to the development of BLSD or during the rainy season.

This method consists in systematically removing the 3 oldest leaves at flowering. This strategy has a strong impact on the plant's leaf area. It anticipates, but does not replace sanitary deleafing since symptoms can appear on other leaves before harvest.

The cut leaves should not stick to the base of the plant or the sucker, to avoid contamination. Infected leaves being sources of inoculum even when they have been cut and left on the soil, it is recommended to accelerate their decomposition. If the scientific community does not agree which side of the leaf should face the soil, it agrees that piling them reduces spore dispersion. Two methods need further testing in commercial plantations to evaluate their efficiency: 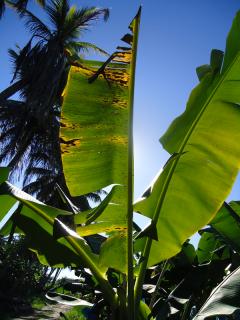 New necroses appeared after the removal of the tip and right blade. The entire leaf will need to be removed during the next round. 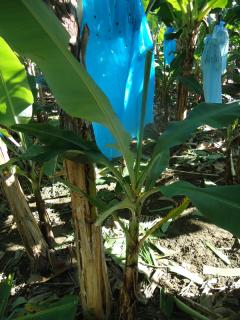 Presence of BLSD on the suckers. All the plants, including suckers, need to be looked at and subjected to deleafing if symptoms are present. 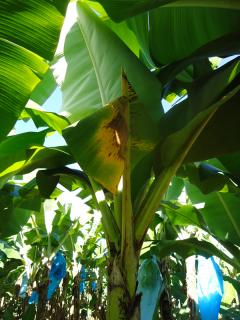 A study conducted in Guadeloupe at a time when only Mycosphaerella musicola was present, showed that although deleafing reduced the weight and diameter of fruits harvested at 900 degree-days, their green life was significantly increased1 . In highly infested plots, leaf removal increased the green life from an average of 7.7 days to 45.8 days. The authors also note that intense deleafing (leaving less than 3 leaves on a plant) negatively impacts fruit weght. However, leaving 5 or more leaves should not significantly affect yield. Since the presence of necrotic tissues during the last month of fruit growth seems to be responsible for the physiological changes linked to early ripening, the authors suggest that in severe infestations, yield losses could be reduced by deleafing one month before harvest.