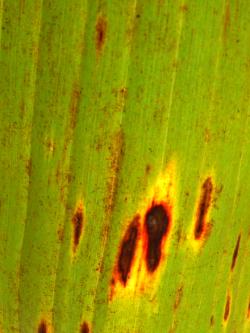 The biological forecasting system to control Sigatoka leaf spot disease monitors the development of the disease in order to control it with a minimum of fungicide applications. The aim of the method is to block the development of the disease towards necroses. Since the efficiency of the treatments relies on a strong curative effect, systemic fungicides are preferred to contact fungicides. Adding mineral oil to the fungicide will also increase its curative effect. The method is not suitable for areas that receive rain all year round and works best when the logistics and decision-making is centralized and done by specialists. Besides lowering the cost of controlling leaf spot diseases, it also minimizes the impact on the environment. The forecasting system was later adapted to control black leaf streak disease.

The timing of the decision to apply fungicides takes into account the development of the disease and of the plant, both of which are climate driven. The first step consists in setting up a field-based monitoring system. The main parameter that needs to be assessed is the stage of evolution of the disease (SED). The SED is also a good indicator of the efficiency of the fungicide applications. The complete protocol is published in Fruits1 .

Every week, for each plant, note down, for each of the first 5 leaves, the most advanced stage of the disease. On the data sheet, for each leaf number, put an 'x' in the corresponding disease stage column (leave blank if the leaf doesn't show any symptom):

Add the FER of each sampled plant to obtain the SumFER.

Example of the timing of fungicide applications based on weekly fluctuations in SED.
(Source Ganry et al. 20081 )