Loading...
News and analysis » Lessening the impact of tropical cyclones

The Australian banana industry developed pre- and post-cyclone practices to reduce the impact of tropical cyclones on growers’ livelihoods.

It’s cyclone season again in northern Queensland. The region also happens to be where the bulk of Australia’s bananas are produced, a situation that is not without risks for growers. When cyclone Yasi destroyed 75% of the crop in February 2011, many of them were still reeling from the impact of cyclone Larry 5 years earlier. Their plants had recovered, but not their finances.

As Stewart Lindsay of the Queensland Department of Agriculture and Fisheries (DAF) showed in his presentation at last year’s ProMusa symposium, a severe cyclone has repercussions on the supply of bananas long after the initial devastation. In the example of cyclone Larry (see graph) this translated in a glut when the impacted plants, which were at different stages of development before the cyclone, all reached maturity at the same time, driving prices down as the market tried to absorb 9 to 11 months’ worth of production in 3 months. The region-wide synchronisation also meant that the surplus was followed by a shortage during which prices were once again high, but the number of growers able to take advantage of them low. Production peaked one more time before finally stabilizing 2 years after the storm.

Had growers spread out harvest by strategically knocking down the follower sucker, the supply of bananas would have returned to normal more rapidly. After Yasi, growers were urged by the retail sector and the banana industry to stagger their future harvest to avoid these boom and bust cycles. Sensing that growers needed more information to help them weigh their options, the Australian Banana Growers’ Council (ABGC) commissioned DAF and SLV Comiskey, a Food & Agribusiness consultant, to quantify the agronomic and financial impacts of staggering harvest. They also tested the impact of removing the canopy, a pre-cyclone management technique that was tried for the first time on a small number of farms as cyclone Yasi approached.

To Norman Simmonds, the author of seminal works on bananas, the greatest hazard of cultivating bananas was not pests and diseases but wind. “No one knows the total losses caused by wind, but they are probably equal to the losses caused by all the pathogens put together. The surprising thing about bananas is not that they are subject to damage by wind but that they ever stand up at all, when one considers the mechanical disadvantage inherent in the bearing of a great mass of fruits at the top of a tall, herbaceous stem.”

Simmonds was not only referring to cyclones, which “can devastate thousands of acres in a few minutes, laying the broken plants out in neat rows along the line of the first great gusts”. He was also including the more “insidious” impact of moderate winds. For example, leaves tearing along their veins is a normal phenomenon, but in the subtropics regular seasonal winds (between 18 and 36 km/hour) can reduce yield by decreasing the surface area intercepting photosynthetically active radiation. The impact was found to be most severe when the leaf strips were less than 50 mm wide. Dry winds also increase evaporation, which results in water stress.

Wind speed is not the only factor affecting the extent of damage. The height of a plant and its root system can also tip the balance either way. Dwarf types, for example, are better at withstanding gale force winds than tall cultivars. A well-developed root system can also help. Recovery, for one, will be faster when a plant has remained anchored in the ground, even though the pseudostem has doubled over or snapped, compared to a plant that was uprooted (toppled over). Conversely, by weakening the root system, pests such as nematodes and weevils can make a plant more vulnerable to wind damage.

One of the expenses growers often face after a severe cyclone is replanting the mats that have been blown out of the ground. Experience had shown that removing the leaf canopy before the cyclone to reduce wind resistance can prevent blow downs, but it also revealed an unexpected benefit. Trimmed plants produced a bunch well in advance of the suckers whose mother plant had snapped or doubled over. However, while the influx of cash at a time of financial hardship was welcomed, the bunches tended to have fewer hands or shorter fruits. Plants whose canopy had been removed before cyclone Yasi next to doubled over control plants.

A field trial at the South Johnstone Research Station investigated the cause of the variability in bunch size and fruit length in the Cavendish cultivar ‘Williams’. The hypothesis was that the impact of removing the leaf canopy depended on the timing of the operation relative to bunch initiation. However, since there is no external sign that the inflorescence has started growing inside the pseudostem, the number of leaves was used to estimate the plant development stage. Based on previous trials indicating that 29 to 31 leaves coincided with bunch emergence, bunch initiation was assumed to coincide with the presence of 19 to 20 leaves.

The decision to remove or not the canopy will depend on the nature of the cyclone, says Lindsay. “Category 4 and 5 cyclones, like Larry and Yasi, have a high probability of destroying the majority of banana plants. In this scenario, removing the canopy of plants regardless of their stage of development will be financially beneficial because the market will accept short fruits that would normally be rejected. But if the whole production region doesn’t get wiped out, this is probably one of the worst things to do. Growers need to be convinced that the cyclone is going to hit their farm before taking such a drastic measure.” But since that certainty usually comes at the last minute, and by that time growers and their staff are busy preparing their homes for the impact, there is only so much they can do to protect their banana plants. Mechanising canopy removal would help growers cover a larger area in a short time, says Lindsay. 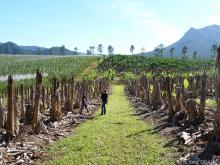 The technique recommended to rehabilitate plots damaged by a severe cyclone also comes with tradeoffs since the grower has to forgo a crop cycle. The crop management technique, called nurse suckering, consists in destroying the apical meristem to stop the follower sucker from producing a bunch, a procedure that will also stimulate the growth of new suckers. The practice will delay harvest until the sucker selected to produce the next crop reaches maturity. The technique was popular in the 1960s when most of the bananas were grown further south, where temperatures are lower. Growers in the tropical north of Queensland used it to schedule harvest in winter to take advantage of the higher prices.

Bunch sizes and fruit characteristics were similar between the three treatment plots and the control one. The difference was in the distribution of harvest between November 2011 and December 2012. It was more evenly distributed in the treatment plots than in the control one, which experienced two distinct peaks at the end of 2011 and again at the end of 2012. “Our field trial and the positive experience of banana producers who adopted staggered cropping helped make the case for the necessity of managing the crop cycle after a major cyclonic event”, says Lindsay.

The study commissioned by the ABGC also had an economic component to estimate the financial impact of applying the tested crop management strategies. It turns out that the most risky strategy, canopy removal, has the highest expected return per hectare – 70,191 AUD if the canopy is removed before bunch initiation and 35,734 AUD if removed after bunch initiation – compared to 4,073 AUD if nothing is done. Growers who applied any of the assessed crop management strategies after cyclone Yasi are estimated to have made a minimum of 9,703 AUD per hectare, a 20-25% increase over average farm revenues.

The authors of the report point out that the figures are averages and that the benefits to individual growers will depend on their production costs, the productivity of their fields and their marketing skills, which a modelling tool can help them estimate. The report also notes that the financial benefits of staggering harvest will be lower with less destructive cyclones, since the growers who are not impacted by the cyclone will be able to maintain production. The benefits will also be lower as more growers adopt the crop management strategies. But with cyclones showing no sign of abating – last year’s Ita was the strongest cyclone to hit Queensland since Yasi, although this time it bypassed most of the banana producing areas – knowing how to mitigate their impacts will remain topical as long as there are bananas in their path.