Loading...
News and analysis » The Plantains of the Democratic Republic of Congo

A series of collecting missions to the four corners of the Democratic Republic of Congo reveals the extent of the country’s Plantain diversity. 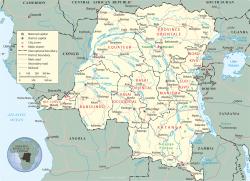 Map of the Democratic Republic of Congo (source: www.geographicguide.com)

Experts have long suspected that the Democratic Republic of Congo (DRC) is home to one of the highest diversity of Plantains in Africa. They now have a list of 97 cultivars to mull over, courtesy of Joseph Adheka who as part of his PhD characterized the accessions that were introduced to the University of Kisangani’s UNIKIS field collection between 2005 and 2012.

It’s almost double the previous estimate of 56 cultivars described by Edmond De Langhe during his stay at the Yangambi research station in the 1950s. The banana field collection in Yangambi is long gone – the station stopped operating in 1960 – but some of the Plantain accessions were rescued by Benoît Dhed’a Djailo, a professor at the University of Kisangani and Adheka’s thesis supervisor, and added to the UNIKIS field collection. 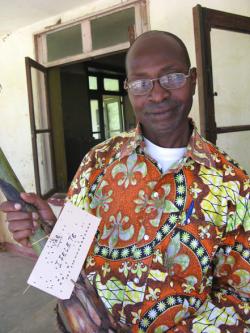 Dhed’a Djailo established the collection in 2005 in the framework of a project led by Bioversity International and funded by the Gatsby Charitable Foundation. Between 2005 and 2007, he and his colleagues conducted four collecting missions in the Oriental Province, in which Kisangani and Yangambi are located (see map). In 2009, the University of Kisangani — in collaboration with Bioversity, KU Leuven’s Laboratory of Crop Improvement in Belgium and the Université Catholique du Graben (UCG) in DRC — extended collecting to all the provinces, except the Bas-Congo one, as part of a multi-year effort involving one PhD student (Adheka) and six MSc students funded by the Belgian Development Cooperation (through CIALCA) and the Flemish Inter-University Council.

The highest diversity of Plantains was found in the Oriental and Equateur provinces, both of which have the kind of hot and humid climate in which Plantains thrive. The data collected in farmers’ fields also reveal that when the Plantain cultivars are sorted by type (French, False Horn and Horn), farmers have a marked preference for False Horn cultivars. Even though there are nearly three times as many French cultivars as False Horn ones, the two most popular cultivars in the country are False Horn ones (‘Libanga Likale’ and ‘Libanga Lifimbo’). Two Horn cultivars (‘Ikpolo’ and ‘Ikpolo Red’) also feature among the five most widely grown cultivars, even though Horn types account for only 10% of the Plantain diversity in the UNIKIS collection. The only French cultivar in the top five is ‘Litete’. 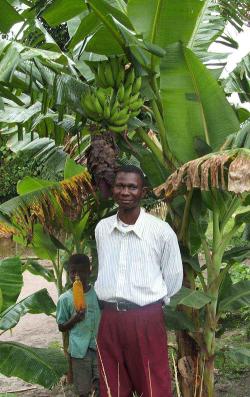 Farmers mentioned marketability and a shorter production cycle as the main reasons for growing False Horn and Horn types, but Adheka thinks that their higher tolerance to dry spells also contributes to their popularity. As for the high diversity of French cultivars, Adheka attributes it to a long history of Plantain cultivation in the Congo Basin rainforest.

Since bananas are native to the Asia-Pacific region, Plantains were necessarily introduced to Africa. It’s impossible to say how many cultivars were initially brought in but since the French types are the only Plantains that have a male bud at harvest, they are believed to have given rise to the other types through a series of mutations. If one or more French Plantains arrived on the continent as long as 3,000 years ago, as some of the archaeological evidence suggests, it would have left ample time for new cultivars to be created by farmers vegetatively propagating the natural mutants that appealed to them.

Some of the mutations have no agronomic or economic impact. For example, about half of the accessions in the UNIKIS collection are a colour variant of another cultivar. On the other hand, variants as such dwarf plants or early fruiting ones can be beneficial to farmers even if they translate into a smaller bunch. The UNIKIS collection has five dwarf/semi-dwarf cultivars but Adheka was able to determine — based on the detailed descriptions made by De Langhe, who also advised him during his PhD — that it is missing some of the dwarf types that used to be in the Yangambi collection. Adheka suggests revisiting the areas where they were originally collected to see whether they can be recollected.

UCG’s high-altitude (1,815 m) collection in Butembo, North Kivu, is also a potential source of Plantains not represented in the UNIKIS collection. Moreover, even though most of the accessions were collected at lower elevations, some come from highland areas (up to 2,200 m) and as such could possess adaptations to cold temperatures. Adheka says that planting these in the UNIKIS collection would reveal whether this phenotype is real (in which case the UCG accessions would grow less well at a lower altitude) or a demonstration of ecological flexibility (in which case the UCG accessions would perform as well and might even turn out to be identical to UNIKIS accessions).

The number of cultivars in the UNIKIS collection could also increase if areas of DRC that have not yet been explored are targeted for collecting. But even if it remains at around 100, the diversity of Plantains in the whole of Africa will probably need to be revised upwards.

West Africa is also rich in Plantains and has been the target of much collecting during the second half of the 20th century. Two collections are believed to be representative of the region’s diversity: the ones managed by the Centre Africain de Recherches sur Bananiers et Plantains (CARBAP) in Cameroon and the International Institute of Tropical Agriculture (IITA) in Nigeria. Comparing the accessions in these collections with the ones in the UNIKIS collection would reveal how many are unique to each region.

Adheka points out that planting the three collections’ accessions in one location would be expensive. Instead, he suggests that the curators visit each other’s collection and through regular discussions and exchange of data reach an agreement on synonyms and unique accessions. However it's done, the reconciliation of the main Plantain collections would shed light on the true scope of the already impressive phenotypic diversity of African Plantains.