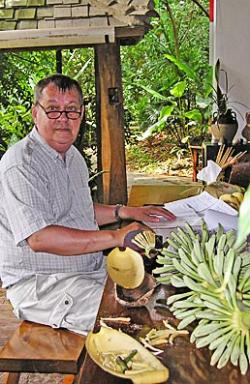 Markku Häkkinen was worried that time was running out for the wild species of bananas to which he dedicated the latter part of his life. He wanted to describe and collect samples of as many wild bananas as possible before they disappeared from the shrinking tropical forests of southeast Asia. On December 5th, Markku lost his own race against time when he passed away at the age of 69.

A former sea captain, he embarked on a second career as a banana specialist after retiring from the merchant marine in the 1990s. His years of travelling the four corners of the world had stimulated his interest in natural history and botany, but it is the purchase of a banana plant in his native Finland that sparked his curiosity for this group of tropical plants.

As an amateur botanist with no formal academic training, he initially had difficulties getting published in scientific journals. He used to compare the experience of submitting a paper to throwing a boomerang. Eventually the rejections stopped coming with the result that between 2001 and 2015 he published more than 80 scientific and popular articles, including accounts of his trips to Borneo, China, Thailand and Vietnam, among other places he explored. Over the years, he made 21 expeditions to document the diversity of wild species of bananas in Asia.

Aided by his photographic skills, Markku described 49 taxa (species, subspecies and varieties of Musa). He also used his vast knowledge of the taxonomic literature and his familiarity with the International Code of Nomenclature for algae, fungi, and plants to clear up some of the confusion surrounding the taxonomy of bananas.

For example, whereas the rules of botanical nomenclature dictate that the first name used to describe a plant has priority over all later names, Markku and his collaborator Henry Väre from the Finnish Museum of Natural History argued to defer to usage in the cases of Musa velutina and Musa balbisiana. He also consulted herbarium specimens all over the world and reviewed 442 published names in the process of producing a checklist of Musa names. Most recently, he collaborated with molecular systematists to take his taxonomic insights to a higher level, that of the sections. In 2013, Markku published a revision that reduced the number of sections from 5 to 2.

His standing within the scientific community is now widely recognised. He was considered to be one of the world’s leading authorities on the taxonomy of Musa. He was a visiting researcher at the University of Helsinki’s Natural History Museum and the Chinese Academy of Sciences’ Xishuangbanna Tropical Botanical Garden, as well as a member of MusaNet’s Taxonomic Advisory Group. He was also a member of the International Association for Plant Taxonomy and an Emeritus Member of the Botanical Society of America.

He also received accolades from his peers. In 2009, the Linnean Society of London gave him the HH Bloomer award, the association's highest recognition for a self-taught botanist. It is awarded every year to an amateur naturalist who has made an important contribution to biological knowledge. In 2015, he was honoured with a Significant Cultural Act Award from the Finnish Cultural Foundation for his years of work on the taxonomy of wild bananas.

Markku will also be remembered through the three taxa that were named in his honour: Musa haekkinenii, Musa markkui and Musa velutina subsp. markuana.

In the spring of 2014, Markku Häkkinen was diagnosed with amyotrophic lateral sclerosis. The disease forced him to give up field work, but he continued writing articles and corresponding with people from all over the world. Markku was very generous with his time. He especially liked helping young scientists interested in Musa taxonomy.

One of Markku's frequent collaborators, Richard Wallace from Armstrong State University in the USA, kindly provided the dedication below. By all accounts Markku was a unique individual. The banana community will miss him.

P.S. Markku Häkkinen was inducted to the Musa Hall of Fame in August 2016.