Loading...
Under the peel » TR4 as a driver of agroecological approaches in banana production

Seeking more sustainable banana production systems, the theme of this ISHS-ProMusa symposium on Agroecological approaches to promote innovative banana production systems, is an admirable goal. However, the changes to agricultural systems foreshadowed by agroecological approaches are much more difficult to implement than simple changes ? like substituting a pesticide with an alternative of similar efficacy ? mainly because of the complexity of the interactions and the limited understanding of the potential social, financial, cultural and biophysical outcomes. Moreover, not only are complex changes expensive to implement, the fruit produced in these new systems seldom command a premium price to help offset the investment. 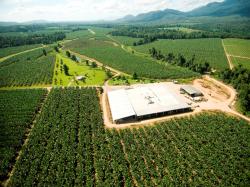 In Australia, the investment capacity of producers has also been compromised by losses to tropical cyclones and the price squeeze exerted by supermarkets. The proximity of the banana industry to two UNESCO World Heritage natural sites ? the Great Barrier Reef and the Wet Tropics of Queensland ? has raised community expectations for agroecological approaches in banana production, but change has been somewhat limited. And then along came TR4. 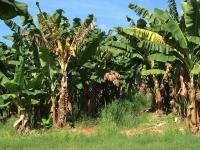 Infested plants on the Tully property early on in the incursion. (Photo by S. Lindsay, Queensland DAF)

On March 4, 2015 it was announced that the fungal strain that causes Fusarium wilt in Cavendish cultivars had been found for the first time in Tully, which is located in the wet tropical coast of north Queensland, the country’s main banana-producing region.

We have been acutely aware that the banana world is watching to see how Australia tackles this giant, and whether it will be successful given past success against the likes of black Sigatoka. We have also been asking the question “What positive benefits can come out of this crisis?”

Eighteen months on, the incursion is still contained to the one farm where TR4 was first detected. The diseased plants have been progressively destroyed and the surrounding ones injected with glyphosate. Production resumed after strict biosecurity protocols were put in place, but the farm is now in the process of being purchased by the Australian Banana Growers’ Council (ABGC). The aim is to eliminate all the bananas to stop the build-up of fungal spores in the soil and to shut the farm down to prevent their escape.

The benefits of exclusion

As there is no cultural or chemical cure for TR4, prevention (Plan A) is the key to protecting the industry. The disease is mostly spread by infected planting material and contaminated soil and water. The biosecurity measures Australian banana growers are encouraged to implement were designed to halt the movement of the pathogen along these pathways. Many banana growers have already spent large sums of money to protect their farms. Their main motivation is financial ? farmers stand to lose their livelihood if they can’t keep the disease out ? but it was driven by the presence of TR4 on their doorstep. 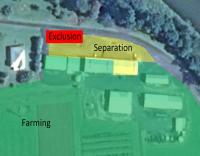 The primary line of defence is the exclusion of all non-essential visitors, vehicles and plant material from outside. This is part of a strategy to manage people and vehicle access that is called differential access zoning. For banana farms, we propose three key zones:
1. The exclusion zone for vehicles that don’t need to enter the farm;
2. The separation zone for essential vehicles that are low risk (i.e. not associated with field production) and which are usually subjected to cleaning/disinfection procedures;
3. The farming zone, where farming activities take place, is physically separated from the other zones to manage the risk of cross-contamination.

Some of the actual practices put in place include physical barriers, facilities for footwear change at zone boundaries, and vehicle wash-down facilities. 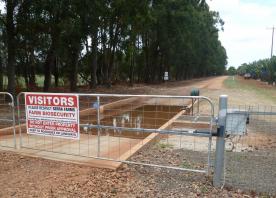 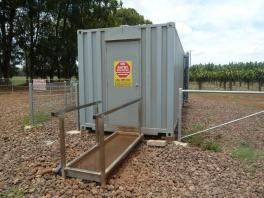 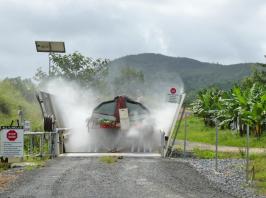 These practices also provide a barrier to the entry of other pests, diseases and weeds, thereby lessening the need for pesticides. Managing the movement of water and soil can also have a beneficial impact on the environment. 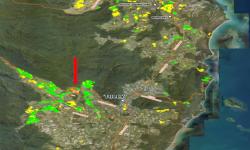 Nearly a third of the banana farms in the Tully river valley are at risk of flooding, but they are mostly upstream of the incursion (red arrow on the satellite photo). Should the disease ever be found upstream, it would only be a matter of time before the fungus reached the flood-prone banana plantations downstream.

Over time, we can expect to see a decline in banana production on flood plains. This will have positive environmental outcomes as a result of reduced loss of soil, fertilisers and chemicals through runoff. 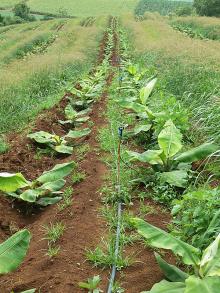 It is also important to limit soil movement off farm through erosion control measures. Such measures need to be in place before the disease arrives on a property. Erosion control measures include ground covers and grassed inter-rows, which should also lessen the severity of Fusarium wilt should it arrive. More attention to soil erosion will bring with it more sustainable agoecosystems.

We can also expect an increase in the use of tissue-culture plantlets beyond the current 30% or so of new plantings, which should also bring additional benefits. Tissue culture is the only way planting material can be guaranteed free of the TR4 fungus, as long as the nurseries also manage the risk of contamination by TR4. Since tissue-culture plantlets are also free of other pests and diseases, they reduce the overall need for pesticides when they are planted.

Historically, banana growers affected by Fusarium wilt have tended to relocate their plantations in an attempt to escape the ravages of the pathogenic fungus. We can expect banana growers to do the same in north Queensland. Ideally these new locations should be located well away from existing production areas, be readily defendable against the fungus and have a climate that is favourable to producing good quality fruit profitably. Such geographical diversification will expand what has already begun as a result of cyclones causing major disruption to market supply and so assist the industry with added market stability. New drier production zones with ample irrigation available could also lessen the impacts on the Great Barrier Reef by lowering the risk of offsite movements of soil, fertilisers and chemicals due to lower rainfall. Such locations also offer the opportunity to start clean not just for Fusarium wilt, but also for weevils and burrowing nematodes.

The experience with Gros Michel in the first half of the 20th century has been that resistant cultivars are only adopted as a last resort, when the industry has run out of clean ground to move to. When that point is reached, Plan B ? integrated production systems ? needs to be ready to roll out.

Polycultures, intercropping and mixed plantings are considered to be more robust than the monocultures that typify banana production in north Queensland and exporting countries. Opinions vary on the extent to which agroecological principles can be applied to large-scale industrial agriculture, but the room to manoeuver is necessarily limited.

As Ron Ashkenas wrote in Turning a Problem into an Opportunity, “Many managers respond to challenges literally. When something happens in the external environment their default position is to continue the current way of doing things, but just ratchet the resources up or down as conditions change. As such, they treat their problems as temporary issues that need to be solved in order to get back to business as usual. But other managers see problems in a different light — as a signal from the environment that it’s time for fresh thinking. For them it’s not just a matter of resolving the immediate issue, but using the problem to reassess the current way of doing business, to innovate. In this way, problems can open new worlds”.

This is relevant at both the individual farm level and the industry level. It takes fresh thinkers with vision to lead the way. We believe we have them in our industry doing just that. An example is the eradication of black Sigatoka from the same Tully region over 10 years ago. The industry must continue to work together and banana farmers in the various catchment areas must implement biosecurity measures to minimize the risk of the disease entering their area. Any catchment area is only as secure as its weakest link. This attitude learned through major struggles overcoming pest incursions should not only stand the industry in good stead, but also help build more sustainable banana agroecosystems.

This blog was adapted from the presentation Jeff Daniells gave at the 2016 ISHS-ProMusa symposium and to which Stewart Lindsay collaborated. Both authors work at the Queensland Department of Agriculture and Fisheries in South Johnstone, Australia.