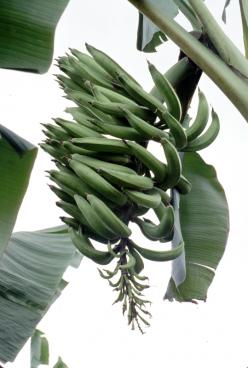 Plantain is the name of a large group of bananas that has upwards of 100 cultivars1 . The expression "bananas and plantains" has created confusion as to what Plantains are2 . The expression was coined to raise awareness on the importance of cooking bananas for food security, but in doing so it helped spread the misconception that the word "banana" refers to dessert bananas only. Paradoxically, FAOSTAT which keeps tabs on bananas and plantains has led to an underestimation of the importance of cooking bananas in global production, and by extension an overestimation of the dessert types3 . In Spanish, plátano, from which is derived the term plantain, is often used to refer to all types of bananas.

The genome of Plantain cultivars, shorthanded AAB, denotes that these bananas have three sets of chromosomes and that they are hybrids of Musa acuminata and Musa balbisiana in a proportion of roughly two to one. Even though bananas originate from the Asia-Pacific region, the diversity of Plantain cultivars is highest in Africa, especially West and Central Africa. This diversity was created locally by farmers selecting and vegetatively propagating natural mutants derived from the maybe more than one cultivar introduced to the African continent. Archaelogical evidence in the form of phytoliths suggests that bananas were being grown in southern Cameroon during  the first millenium BC4 . The diversity of Plantains in the Democratic Republic of Congo is believed to be one of the highest in Africa5 . The Plantain cultivars grown in Latin America were introduced from Africa during the slave trade.

The following traits, recorded on 55 cultivars from the Democratic Republic of Congo, have been proposed as being potentially characteristic of the subgroup6 . 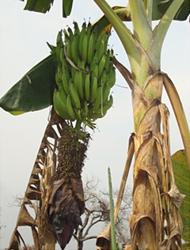 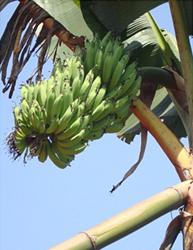 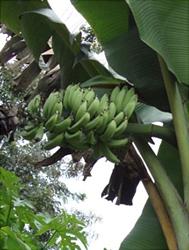 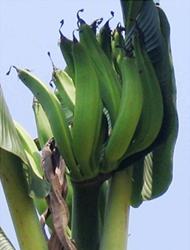 Norman Simmonds recognized two types of Plantain cultivars distinguished by the presence of the male bud (French) or its absence/degeneration (Horn)7 . Two types were later recognized: False Horn8 and French Horn1 . A study of the morphological diversity of 97 accessions collected in the Democratic Republic of Congo recognized three types: French, False Horn and Horn9 . 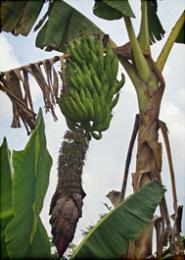 Since the height and girth of the pseudostem vary with the environmental conditions, the number of leaves produced from planting to flowering is used to determine the size class: giant (more than 40 leaves); medium (between 32 and 38 leaves); and small (less than 30 leaves)8 . Most of the French types characterized by large bunches that contain many hands and relatively small fruits. These cultivars have a long vegetative cycle and are susceptible to toppling in windy conditions.

Since the French types are the only ones to have a complete inflorescence, they are believed to be at the origin of the other types. The degeneration process from French to Horn types is believed to have taken place in six phases10 :
Phase 1: The basal male flowers experience an ‘ovary’ hypertrophy.
Phase 2: The male flowers (especially the basal ones) remain attached to the floral axis.
Phase 3: The total number of hands and flowers decreases, but the male bud persists to maturity.
Phase 4: The male bud is quickly exhausted. At maturity about fourty hands, containing flowers with a half-reduced ovary and sometimes developed as small bananas, are observed.
Phase 5: No trace of male bud. The last female hands also disappear. Some cultivars produce only one hand or one very large banana.
Phase 6: The floral axis no longer bears fruits. Two or three very thick but very narrow bracts hang from the sterile glomerules.

Plantain cultivars require a warm and humid climate with no major oscillations. They will generally not survive a dry season that lasts more than 3 months and temperatures below 10ºC for more than a few nights. Exceptions are cultivars such as 'Vuhembe', which has been found growing at 2,172 m in North Kivu, the Democratic republic of Congo6 .