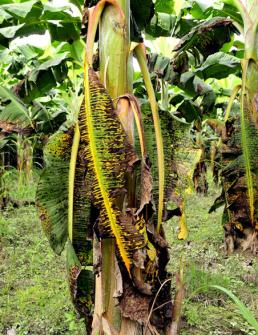 The biological forecasting system to control black leaf streak disease (BLSD) monitors the development of the disease in order to control it with a minimum of fungicide applications. The aim of the method is to block the development of the disease towards necroses. Since the efficiency of the treatments relies on a strong curative effect, systemic fungicides are preferred to contact fungicides. Adding mineral oil to the fungicide will also increase its curative effect. Originally developed for Sigatoka leaf spot disease, the method is not suitable for areas that receive rain all year round and works best when the logistics and decision-making is centralized and done by specialists. Besides lowering the cost of controlling leaf spot diseases, it also minimizes the impact on the environment.

The timing of the decision to apply fungicides takes into account the development of the disease and of the plant, both of which are climate driven. The first step consists in setting up a field-based monitoring system. The main parameter that needs to be assessed is the stage of evolution of the disease (SED). The SED is also a good indicator of the efficiency of the fungicide applications. The complete protocol is published in Fruits1 .

Add the FER of each sampled plants to obtain the SumFER.

Plot the SED over time. A significant increase in the SED can trigger the decision to apply a fungicide, but should also take in other factors, such as weekly rainfall, and other disease parameters2 . The time between the decision to treat with fungicides and their application should not exceed 2 days and the entire area should be covered on the same day. If aerial spraying is used to apply the fungicides, care must be taken that the climatic conditions are suitable.

Example of the timing of fungicide applications (the different colour of arrows corresponds to different fungicides) based on SED and rainfall data. (Source Ganry et al. 20122 )

This forecasting system was developed in Guadeloupe and Martinique in the 1970s to control Sigatoka leaf spot disease. It was then adapted to BLSD in the 1980s, first on plantains in Gabon and then on export bananas in Cameroun, Ivory Coast and Ecuador. In places where this forecasting system has been used, BLSD has been controlled with an average of 10 to 15 applications a year 3 . In the 1990s, a study in Colombia showed a 50% reduction in the number of fungicide applications and a 40% decrease in the cost of controlling BLSD4 .

Adaptation of the forecasting system to control black leaf streak disease of banana in the specific conditions of Dominican Republic in Fruits, 2014, volume 69:261-278.