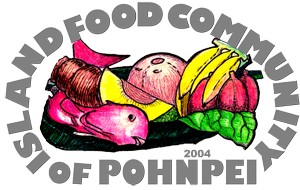 The Island Food Community of Pohnpei is a local non-profit organization dedicated to the promotion of local food. It was created in 2004 by Lois Englberger, an American nutritionist, and Adelino Lorens, Pohnpei State Agriculture Chief.

When Englberger arrived in Pohnpei in 1997, conditions related to vitamin A deficiency (VAD) had started to emerge in children. The vitamin deficiency was one of the non-communicable diseases, along with obesity, diabetes and heart disease, that had taken on epidemic proportions as consumption of nutrient-poor imported foods increased after World War II. Since VAD was a recent problem, Englberger and her colleagues went on a search for local foods that used to protect islanders against the condition. Acting on information that Karat bananas used to be a traditional infant food, they found that these atypical bananas are rich in beta-carotene, which the body converts into vitamin A. The IFCP was created to promote the consumption of local foods that have health benefits and has been working with partners on four priority areas: awareness, conservation, small-scale processing and research1 . 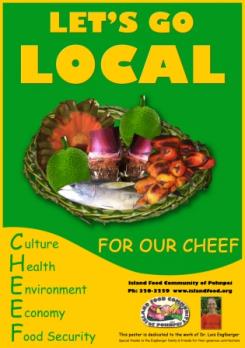 The IFCP's first challenge was to change entrenched attitudes regarding local foods. Many islanders saw the consumption of local foods as a sign of poverty. That people were only eating them because they had no money to buy rice or other processed foods. The IFCP also had to fight the notion that local foods are less convenient and more expensive than imported products.

The IFCP has been using photos, posters, booklets and other types of activities to raise awareness on the health benefits of eating local foods. In 2005, the IFCP participated in a global health project led by the Centre for Indigenous Peoples' Nutrition and Environment based at McGill University in Canada2 . The Pohnpei case study, which targeted the village of Mand, covered a period of five years from May 2005 to March 2010. After documenting the traditional food system in the community of Mand, the project implemented a series of food-based health enhancing interventions and activities3 .

The project revived the 'Let's Go Local' slogan first used in Pohnpei in the 1980s by a local government official4 . The 'Going Yellow' slogan was also used to convey the message that yellow-fleshed fruits and vegetables are rich sources of nutrients. In 2007, IFCP coined the CHEEF acronym summarizing the benefits of culture, health, environment, economics and food security3 . 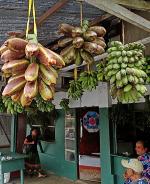 Karat bananas in a Pohnpei market.

Karat bananas have been at the forefront of campaigns led by IFCP. A campaign started in 1999 has led to the revival of their cultivation. In 1998, it was not possible to buy Karat bananas in local markets. Less than 10 years later, a study revealed that it was available in no less than eight markets on the island5 6 . The IFCP also produced a photo collection of carotenoid-rich banana cultivars7 .

A field collection of carotenoid-rich cultivars was established at Pohlangas. In 2009, it contained 32 accessions of bananas, 69 of of giant swamp taros and 14 of pandanus1 . The collection also provides planting material and is also used for training.

The analysis of local foods for their nutritional value has been an on-going project. In addition to pro-vitamin A carotenoids, local foods have been analysed for other vitamins, such as riboflavin8 .

In pictures on The bananas of Pohnpei, August 2015