FSM at a glance

The Federated States of Micronesia (FSM) is an island nation made up of four states: Yap, Chuuk, Pohnpei and Kosrae. Pohnpei, in particular, is host to a diversity of Karat bananas whose cultivation has been revived following the creation in 2004 of the Island Food Community of Pohnpei by Lois Englberger. 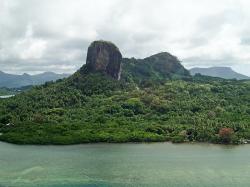 Island of Pohnpei (Photo by A. Vezina)

The state of Pohnpei includes the mountainous island of Pohnpei (355 square kilometer) and five main outlying atoll islands5 . The island of Pohnpei is rich in agricultural resources, compared to the atolls which have hot dry climates and poor sandy soils that make it difficult to grow crops. It is also one of the wettest places on earth with average annual rainfall exceeding 7,600 mm in certain mountainous locations. In 2010, the population of the state was estimated at about 36,000 people6 .

Up to the 1950s, the inhabitants of Pohnpei consumed mainly traditional foods (such as banana, breadfruit, taro, yam, coconut, pandanus, fish and seafood)7 . A health survey of the FSM conducted after the Second World War by the US navy noted the almost complete absence of malnutrition or obesity and no indication of diabetes. A blood pressure study conducted on Pohnpei in the late 1940s showed almost no hypertension8 . However, by the late 1980s, the prevalence of obesity, diabetes and other non-communicable diseases such as heart disease and cancer, were taking on epidemic proportions as consumption of imported foods (such as rice, flour, fatty meats, sugar and sweets) accelerated. For example, the 2002 STEPS survey of Pohnpei showed that more than 70% of the adult population aged 25 to 64 years (both sexes) was either overweight or obese (more than 80% of women were classified as overweight) and 32.8% of adult participants (both sexes) were diabetic9 .

Pohnpei also has a serious micronutrient deficiency problem. In 1993, a survey estimated that more than half of the children under five years of age had vitamin A deficiency10 . To alleviate this deficiency, a vitamin A supplementation programme was established for all children aged one to 12 years11 . When Lois Englberger moved to Pohnpei in 1997, she and her colleagues surmised that since vitamin A deficiency was a recent problem, something in the traditional diet must have protected the local population against this type of deficiency. They started to look for clues in the traditional diet. Their search led to the identification of foods rich in precursors of vitamin A, including bananas12 . The results of the analyses were used to promote local food13 , eventually leading to the creation of the Island Food Community of Pohnpei in 2004. 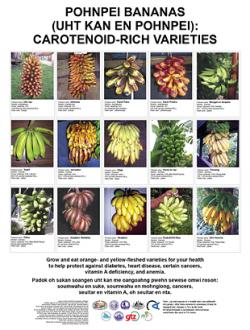 In 2005, Pohnpei was selected as one of the 12 case studies taking part in a global health project led by the Centre for Indigenous Peoples' Nutrition and Environment based at McGill University in Canada14 . The overall goal of the project was to document the strengths of traditional food systems. The Pohnpei case study, which targeted the village of Mand, covered a period of five years from May 2005 to March 2010. After documenting the traditional food system in the community of Mand, the project implemented a series of food-based health enhancing interventions and activities, many of which were island-wide. The project was evaluated from June to August 2007 and the diet of the inhabitants of Mand surveyed again in June 2009 following a two-year absence of intervention activities in the village15 .

The promotion of Karat bananas has led to a revival of their cultivation. In 1998, it was not possible to buy Karat bananas in local markets. Nearly 10 years later, a study revealed that it was available in at least eight markets on the island16 17 .

During a 1990 visit, a consultant noted that cultivars susceptible to black leaf streak were being replaced by resistant ones, such as Saba and Mysore20 .