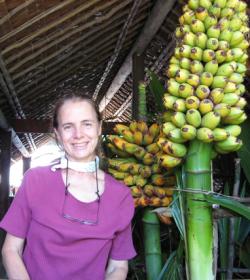 Twice made the list of Pacific Leaders to know

Lois Englberger was a nutritionist and advocate of local food who changed the way people look at bananas, or at least their colour. Before she presented results on the levels of provitamin A carotenoids in Karat bananas at the 2004 ProMusa symposium, scientists not familiar with the Pacific region were largely unaware of the existence of yellow and orange-fleshed bananas, much less that they could be used to fight vitamin A deficiency. Her presentation at the meeting opened the door for other scientists to start working on vitamin A in bananas1 2 , while the press coverage introduced these unusual bananas to a wider audience3 4 .

Up to her death on 29 September 20115 , Lois was based in Pohnpei, in the Federated States of Micronesia (FSM), where she was the Acting Director and Research Advisor of the Island Food Community of Pohnpei (IFCP). The State of Pohnpei held a Memorial Service to honour her leadership in promoting local food for the health of the people of Pohnpei and issued stamps in her memory6 . The last interview she gave is featured in the September 2011 issue of Farming Matters7 .

Lois was raised on a small farm in northwestern Missouri, where she got involved in the activities of the 4-H youth development organization. After obtaining a Bachelor of Science from the University of Missouri at Columbia in 1970, she was chosen as the State's delegate by International Farm Youth Exchange. She was sent to India, where for six months she lived with host families in rural areas of Punjab, Kerala and Goa.

On her return to the United States, she joined the International Nutrition programme at Cornell University to do a Master on lactose intolerance in children. Her field work took her to Bogota, Colombia, and Yemen, which she visited at the invitation of a German agriculturist she had met in India and who later became her husband. After finishing her thesis, she returned to Yemen to work in health clinics with the International Voluntary Services and Catholic Relief Services.

In 1980, Lois and her husband moved to Tonga, where she assisted the National Food and Nutrition Committee in organizing activities, including a national weight loss competition8 . The campaign got a boost from the King after Lois helped him lose more than 70 kilos. The couple moved to Pohnpei in 1997 where Lois worked as a United Nations Volunteer with UNICEF and the FSM government.

At the time, conditions related to vitamin A deficiency had started to emerge in children. In an attempt to alleviate the problem, the population was encouraged to eat green leafy vegetables and other foods recommended by international bodies, only to find out that many Micronesians considered green vegetables as food for pigs and had no tradition of eating them9 . Lois and her colleagues surmised that since vitamin A deficiency was a recent problem, something in the traditional diet must have protected the local population against this type of deficiency. They started to look for clues in the traditional diet. 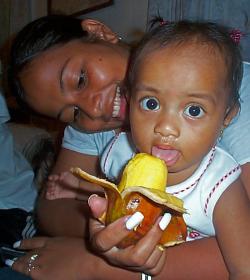 In Pohnpei, the Karat banana is a traditional infant food.

Some Micronesians mentioned how Karat bananas used to be a traditional infant food10 . Lois sent out samples of the orange-fleshed banana for analysis. The results showed that the Karat banana is rich in beta-carotene. It was the first time banana cultivars had been scientifically shown to being rich in precursors of vitamin A11 .

This finding took Lois on a hunt for other food sources of vitamin A in FSM, the topic of her PhD at the University of Queensland in Australia. Her search led to the identification of many carotenoid-rich types of banana, giant swamp taro, pandanus and breadfruit. Her thesis received a Dean's Commendation, given to students in the top 10 percent.

In addition to her work on other foods, Lois went on to produce a series of articles on vitamin A in bananas12 . Further analyses showed that Karat bananas also have high levels of riboflavin and other micronutrients13 . Carotenoids and riboflavin were also examined in bananas from the Solomon Islands 14 . A perfectionist, Lois took great care in tracking down the local names of cultivars. When working on bananas, she enlisted the help of experts, such as Jeff Daniells and Angela Kepler, to provide information on the taxonomy and agronomy of the fruit.

With her PhD in hand, Lois started planning with Pohnpei colleagues the promotion of local foods to reduce the prevalence of health problems such as diabetes, heart disease and obesity, which had taken on epidemic proportions following a shift in diet towards more imported processed foods, including what she calls the "the three white sins": white rice, flour and sugar15 .

In 2004, they formed the Island Food Community of Pohnpei as an NGO16 . The IFCP's first challenge was to change entrenched attitudes regarding local foods. Many islanders saw the consumption of local foods as a sign of poverty. That people were only eating them because they had no money to buy rice or other processed foods. The IFCP also had to fight the notion that local foods are less convenient and more expensive than imported products. 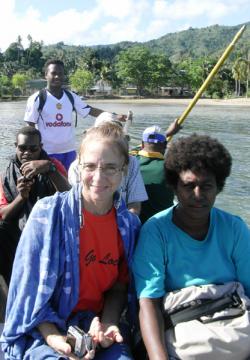 Lois and Roselyn Kabu of the Kastom Gaden Association in the Solomon Islands (Photo by Graham Lyons).

In 2005, IFCP joined the global health project led by the Centre for Indigenous Peoples' Nutrition and Environment (CINE) based at McGill University in Canada17 . The overall goal of the project was to gather data from 12 case studies to document the inherent strengths of traditional food systems and circumstances of the nutrition transition in indigenous communities. The Pohnpei case study, which targeted the village of Mand, covered a period of five years from May 2005 to March 201018 . After documenting the traditional food system in the community of Mand, the project implemented a series of food-based health enhancing interventions and activities, including the revival of the 'Let's Go Local' slogan first used in the 1980s by a local government officer, Bermi Weilbacher19 . In 2007, the IFCP coined the CHEEF acronym summarizing the benefits of local foods: culture, health, environment, economy and food security. The project was evaluated from June to August 200720 and the diet of the inhabitants of Mand surveyed again in June 2009 following a two-year absence of intervention activities in the village21 .

Poster of vitamin A-rich bananas of the Solomon Islands.

Over time, a campaign started in 1999 to promote the Karat bananas led to the revival of their cultivation. In 1998, it was not possible to buy Karat bananas in local markets. Less than 10 years later, a study revealed that it was available in no less than eight markets on the island22 . The Karat banana has also been chosen as the emblem of the State of Pohnpei and is displayed on postage stamps23 .

The successes in Pohnpei allowed Lois to take the Let's Go Local concept to other Pacific countries. She ran a series of popular nutrition workshops in the Solomon Islands24 and Papua New Guinea. She also did consultancies in Kiribati25 and the Marshall Islands. Over time, she amended the famous slogan; not only urging people to go local, but also to stay local.

Lois was a tireless advocate for healthy eating and living. When she attended meetings, it was not unusual for her to conduct informal health surveys among her colleagues and to lead yoga workouts during breaks.

Dean’s Commendation from The University of Queensland for an outstanding PhD thesis.

Honorary Research Advisor at The University of Queensland's School of Population Health from 2003 to 2006.

In 2006 and 2007, Lois made Pacific Magazine's list of Pacific Leaders You Need To Know for her efforts to promote local food.