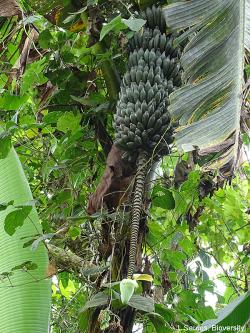 Musa schizocarpa Simmonds1 is a wild species of banana, one of a handful of self-peeling species of banana, that is the peel of the fruit splits (is schizocarpic) at maturity, exposing the seeds. The genetic signature of the species has been found in some banana cultivars.

The description is adapted from The wild bananas of Papua New Guinea2 . The pseudostem is up to 10 m tall and its girth is 100 cm at the base. It is dark blackish brown in the lower part, gradually becoming bright non-waxy or paler waxy green in the upper part, which may be irregularly blotched dark brown. The sap is watery. The suckers emerge close to the parent stem but grow away vertically. The mats are mostly rather small.

The peduncle ( the part between the leaf crown and the first hand of fruits) is green and glabrous. The bunch is very dense, sometimes curved in the upper part, but the lower part—and usually the whole bunch—hangs vertically downwards. The fruits occasionally curve upwards but usually spread outwards through compression.

The young fruits are glabrous, distinctly dark green with a purplish flush. The mature fruits are short and broad, often strengly angular, bottle-nosed, dark green and schizocarpic with the skin peeling back in a rather irregular fashion to expose the gleaming white flesh. The seeds are 6-7 mm in diameter, dark brown or blackish. 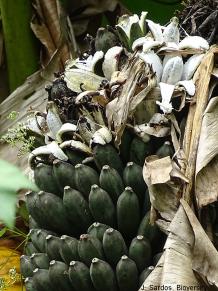 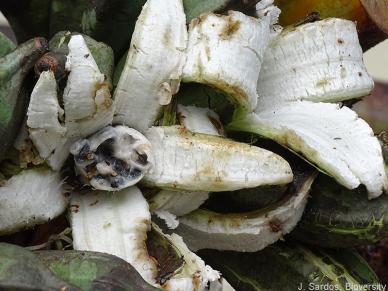 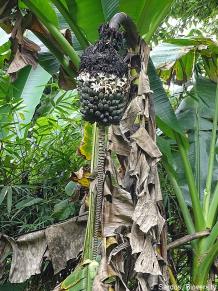 The peel turns black after splitting.

The male peduncle hangs vertically down from the bunch. The male bud is dull green, convolute, with a distinctly rounded distal end. The male bracts are dull green on the outside and green on the inside, turning grey or brownish after lifting. The bracts rapidly curl backwards on lifting and are fully deciduous. The male flower is creamy-white. The compound tepal is almost twice as long as the free tepal and has pale yellow tips to the lobes.

Two variants of this species can be recognised and informally designated as follows: var. A, plant large, rarely fruiting when less than 7m tall, without obvious male bracts curling fromt he distal end only; var. B. plant small, often fruiting when only 2-3 m high, the leaf sheaths and shoulders distinctly waxy, male bracts curling from both distal and proximal ends.