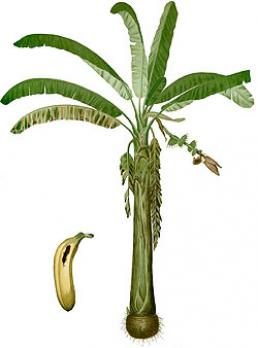 The informal nomenclature system used to classify banana cultivars was developed by Norman Simmonds and Kenneth Shepherd in 19551 . It forgoes two-part Latinized names (the first part indicating the genus, and the second one the species) and instead classifies edible bananas into genome groups, according to the relative contribution of their ancestral wild species, and into subgroups, sets of closely related cultivars. This system eliminates almost all the difficulties and inconsistencies of a taxonomy based on Musa paradisiaca and Musa sapientum2 .

However, due to difficulties in assigning certain cultivars to a genome group and subgroup, there are inconsistencies in the way the system has been applied. Contributing to the confusion is the continued use of Latin binomials to refer to edible bananas.

In this system, bananas, at least the ones that are related to Musa acuminata and Musa balbisiana, are classified according to the relative contribution of these species designated by the letter A, for acuminata, and B, for balbisiana. A cultivar is assigned to a genome group according to the number of chromosome sets in its genome (its ploidy) and the species that donated them (see Domestication of the banana). Diploid cultivars can belong to the AA or AB genome group, while triploid cultivars fall into three genome groups: AAA, AAB and ABB (see the cultivar diversity portal).

Some taxonomists recognize a BBB genome group, but its existence has not been conclusively demonstrated. Tetraploid cultivars are mostly hybrids produced by breeders.

Genome groups are further divided into subgroups usually defined as a set of cultivars derived from each other through somatic mutations. On the basis of this system, cultivar names are put between inverted commas and preceded by the name of the genus and when known, the name of the group and subgroup. For example: Musa (AAA group Cavendish subgroup) 'Robusta'3 .

The system is based on 15 characters that were chosen because they are different in Musa acuminata and Musa balbisiana1 . Each character is scored on a scale from one (typical Musa acuminata) to five (typical Musa balbisiana). The possible total scores range from a minimum of 15 to a maximum of 75. The expected scores are 15 for AA and AAA, 35 for AAB, 45 for AB, 55 for ABB and 75 for BB.

Efforts to classify cultivars into genome groups and subgroups have not progressed much since Simmonds's extensive treatment of cultivars in Bananas. Recognizing the limitations of the current system, some ProMusa and MusaNet members are discussing aligning Simmonds and Shepherd's genome-based nomenclature system with the International Code of Nomenclature for Cultivated Plants as part of an effort to have it formally recognized4 .

1 ● Simmonds, N.W. and Shepherd, K. 1955. The taxonomy and origins of the cultivated bananas. Journal of the Linnean Society of London. Botany 55:302-312.
2 Linnaeus’s banana legacy: How Linnaeus inadvertently muddled the taxonomy of bananas when he gave Latin binomials to two edible bananas, published 22 May 2019 in InfoMus@'s News and analysis section.
3 Page 95 in Stover, R.H. and Simmonds, N.W. 1987. Bananas. 3 ed., Tropical Agricultural Series. Longman, New York, USA. 468 Pp.
4 Modernizing Simmonds and Shepherd’s legacy: The nomenclature system specific to edible bananas is the only alternative to Latin binomials, but it needs tweaking and advocates to promote it, published 22 May 2019 in InfoMus@'s news and analysis section.

Linnaeus’s banana legacy
Modernizing Simmonds and Shepherd’s legacy
Musapedia pages on the domestication of the banana and the scientific name of bananas
Navigate the taxonomy of edible bananas on the cultivar diversity portal
Banana cultivar checklist of local names and synonyms
Where bananas come from in Under the peel, the blog of the ProMusa community, published on 7 October 2015
Portal on wild species of bananas