Loading...
News and analysis » A new threat to Cavendish bananas?

The discovery in India of Cavendish bananas developing symptoms of Fusarium wilt as a result of being infected with a race 1 strain is as perplexing as it is worrisome. 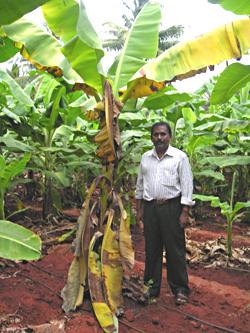 R. Thangavelu, NRCB
In a note published in Plant Disease, scientists from the National Research Centre for Banana (NRCB) in India announced that they have isolated from plants of Grande Naine (Cavendish, AAA) a pathogenic strain of Fusarium oxysporum f. sp. cubense (Foc) that belongs to one of the vegetative compatibility groups associated with race 1, VCG 0124.


Cavendish bananas are usually resistant to race 1 strains. The diseased plants were observed in Theni district, Tamil Nadu, where some 6,500 hectares of Cavendish bananas are being cultivated under a system of irrigation and fertilization. The planting materials are tissue-culture plantlets. A survey conducted in 2008-2009 in the most affected areas revealed that between 6 to 44% of the Cavendish plants had symptoms of Fusarium wilt. Raman Thangavelu from NRCB says that the Cavendish growing in fields where no Cavendish had been planted before were not affected.

The isolates that were identified as race 1 were collected from 5 plants. Scientists have ruled out the possibility of a mixed infection with race 4 strains, to which Cavendish bananas are susceptible. The compatibility tests did not indicate the presence of other VCGs. Thangavelu also adds that over the years his lab has tested 234 Foc isolates collected from different parts of India. None of them turned up to be a race 4 VCG.

In addition to Grande Naine, the NRCB scientists tested the pathogenicity of the race 1 isolate on potted plants of Karpuravalli (Pisang Awak, ABB), Monthan (ABB), Rasthali (Silk, AAB), Nendran (French Plantain, AAB), Poovan (Mysore, AAB), Red Banana (AAA) and Ney Poovan (AB). The severity of the disease was rated two months after inoculation. Internal and external symptoms were observed on all plants except the Nendran and Red Banana cultivars.

This is the first reported case of a race 1 strain causing disease in unstressed Cavendish bananas in the field. In 1993, it was reported that another race 1 VCG (VCG 01220) had been isolated from diseased Cavendish plants (cv. Williams) in Western Australia, but it was later determined that drought and waterlogging had probably predisposed the plants to disease.

The only other known instance of Fusarium on Cavendish bananas growing in an otherwise healthy field also comes from Australia. An isolate collected in 2010 from a single diseased Cavendish plant, in a location where race 4 has not been reported, was identified as belonging to VCG 0124. Wayne O’Neill of the Department of Employment, Economic Development and Innovation in Brisbane, who characterized the isolate, says that growing conditions were excellent when the diseased plant was sampled and there was no evidence of mechanical injury that may have facilitated pathogen entry. Pathogenicity tests have not yet been conducted.

The finding that VCG 0124 can cause disease in unstressed Cavendish bananas is confounding experts. As Altus Viljoen from the University of Stellenbosch in South Africa points out, molecular analyses put VCG 0124 in a different lineage from the one that has the VCGs associated with race 4, suggesting that pathogenicity to Cavendish would have evolved more than once.

Meanwhile, in India, NRCB scientists are working with farmers to help them cope with this new threat to their livelihoods. They are warning them against planting suckers from the diseased areas in their fields. They are also testing biocontrol agents (bacteria and fungi) that they hope will help keep the pathogenic Foc strains in check.

For more information contact Raman Thangavelu at bananathanga at rediffmail.com